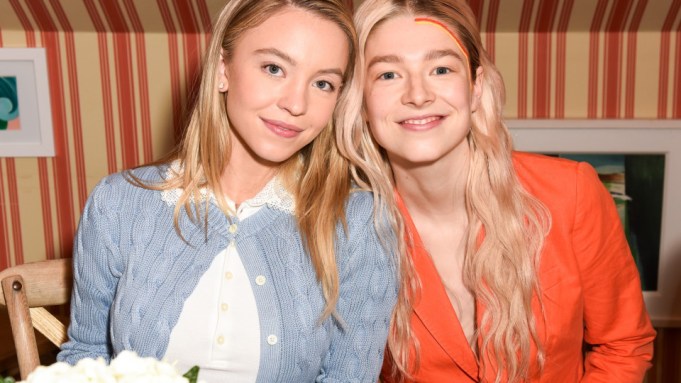 “It was so many DMs from people going, ‘Can you please send my audition tape? Wait, can you please give me the e-mail?’” she said with a playful giggle. “I’m like, ‘Dude, I have no say in any of this. Good luck, though.’”

She begins filming in March, she shared. “I can’t say anything, but it’s going to be season one on crack. Imagine season one but crazier.”

Sweeney was one of many young talents gathered at the San Vicente Bungalows in Los Angeles on Thursday for a luncheon courtesy of Ralph Lauren, which celebrated its new Polo accessories — the “Sloane” bag and “Bellport” tote. It was a bright, sunny day at the members-only club, where lunch — chopped salad, chicken and salmon, followed by lemon meringue pie — was served in a private room. Guests socialized as they sipped on iced tea and lemonade or, for those over 21, white wine and rosé.

Zoey Deutch mingled with Emma Roberts, while Kathryn Newton caught up with Sistine Stallone. There were also actresses Indya Moore, Lexi Underwood, Camilla Belle, Juliette Labelle and Sweeney’s “Euphoria” costar Hunter Schafer, who sported a makeup look reminiscent of the varying creative styles seen on the show — minimal and fresh with yellow and orange lines thinly drawn on the side of her face. L.A.-based artist Fong Min Liao, who was preparing for her next New York City show, also came out, as did model and designer Tylynn Nguyen; stylist Djuna Bel; YouTuber Olivia Rouyre; musical duo Say Lou Lou and singer-songwriters Natalie Mering and Claire Cottrill. All were outfitted in looks by Polo Ralph Lauren.

Though she often works with stylist Molly Dickson, Sweeney ventured on her own to pull clothing for the event: “I went by myself, which is always terrifying, because I never know what I’m going to do. But blue is my favorite color, and right when I walked in, there were these pants hanging up and then there was this cardigan hanging up. I was like, ‘I wonder if I can wear that together.’ The shirt was really long. I asked if we could crop it.”

“I love those pants,” Newton told her. Sweeney returned the compliment. The “Big Little Lies” and “The Society” actress had opted for a white halter dress and wore her long, blonde hair in curls.

Taking her seat, she shared: “I feel like Marilyn.”