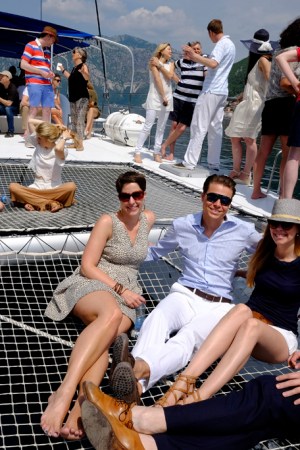 MONTENEGRO — So many European princes, princesses, nobles and ultrariche were aboard a catamaran last month in the Bay of Kotor, Montenegro, that an accident would have kindled an international incident. Fortunately, the three-hour tour went smoothly. Guests included nobility from Albania, Austria, Belgium, Britain, France and Germany as well as investment bankers and art world cognoscenti.

The unusual party was coordinated by Korinna von Kempski Rakoszyn, owner of Culture & Travel Club in Munich, and her daughter, Halina, who invited their “nearest and dearest” for a weekend of festivities in Montenegro.

Few of the 66 visitors had ever set foot in the Balkan nation before.

Eager to nurture tourism, Crown Prince Nicholas of Montenegro hosted the assemblage at a gala dinner at the National Museum of Montenegro in Cetinje.

A Paris architect, Nicholas and his two children knew nothing of their royal heritage until the late Eighties. “My father never spoke to me about Montenegro,” Nicholas explained. But when they first visited the former royal seat of Cetinje in 1989, 200,000 people swarmed the little town to greet them.

His daughter, Princess Althea, was 12 at the time. “It changed a lot of things, but I am still the same,” she said, noting she plans to make a documentary about the experience.

“I love the country but I also feel a little strange,” Althea explained. “It’s very schizophrenic because in Paris it’s another life with our work and my husband and my son, and when I come here I’m another, I’m a princess — aaahhh.”