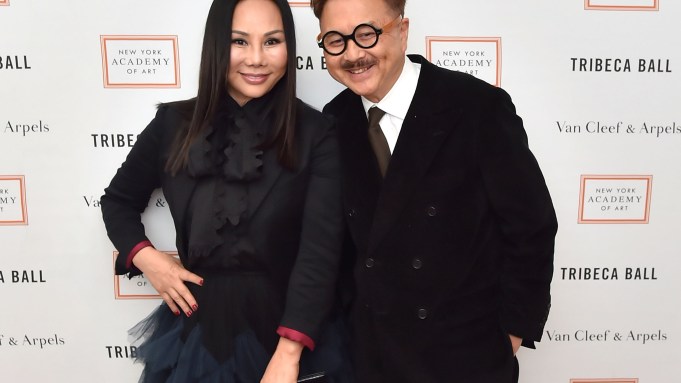 “I don’t have any sparkle; everybody else is sparkling,” lamented Marina Abramovic. She had just returned from a month in Greece, where she headed a performance project, “As One,” with a group of emerging artists at the Benaki Museum in Athens. “We performed for seven weeks, eight hours a day. It’s the most exciting — and they’re still there working as we speak….This will change the world.”

Arden Wohl, one of the Academy’s junior chairs, flitted her way through the party on a Snapchat assignment from W Magazine. She taught herself how to use the video app an hour before the event, and promptly turned her iPhone lens onto Zani Gugelmann. (In a coincidence, the two shared the same hair and makeup team before the party.) “The glam squad came to my house right after Arden’s and I heard all the gossip,” Gugelmann said, showing off her gold diamond necklace, part of her new collection of jewelry inspired by Masonic ball pendants.

A stroll up the school’s packed, narrow staircase revealed five floors of artist studios featuring works from the Academy’s MFA students, in addition to the event’s standard bizarro entertainment courtesy of stilt walkers, contortionists, musicians and speed painters. Naomi Watts, who dabbles in art collecting, particularly photography, seemed in the mood to shop. “Paintings are wonderful things to have on your walls, and these days I’d much rather spend money on that — something that you’ll have forever — than on a dress,” she said.

“Who else but Van Cleef would ask a group of New York’s sparkliest to come dressed in their shimmeriest?” said Academy president David Kratz, whose pale blue suit matched the tablecloths, as he addressed the jewelry firm’s chief executive officers, Nicolas Bos and Alain Bernard, during dinner. “You happen to be two of the best looking men in the jewelry business. Nicolas and Alain, would you please stand up? We want you to take your clothes off and let us draw you.”

The Chows were next up on the podium. In an endearingly long speech, Michael expressed adoration for his wife, Eva — listing all of her career accomplishments as she stood next to him, her face growing bashful — while daughter, Asia, looked on from Table 14. Elsewhere, Rose McGowan, a recent New York City transplant, said she had just wrapped the direction of a new music video for Yoko Ono and Miike Snow. “I’m excited to be in New York now,” she said. “I love it here, except for when that Santacon thing happens.” (For the uninitiated, she was referring to the bro-ey, fratty bar-crawl tradition that plagues the streets every holiday season.) In true rebel fashion, McGowan slipped out of the party early; Joe’s Shanghai was calling. After spotting a painting of a dumpling on the wall, she was hungry for Chinese.