The second annual Linked Against Leukemia Gala Wednesday evening was bent on correcting misconceptions: Becoming a marrow donor is not painful, as... 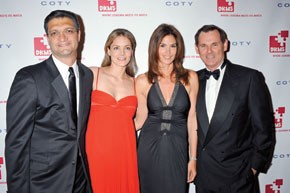 The second annual Linked Against Leukemia Gala Wed­nesday evening was bent on correcting misconceptions: Becoming a marrow donor is not painful, as many commonly assume.

The gala raised nearly $1.2 million to benefit DKMS, said to be the world’s largest marrow donor center. Founded by Coty Inc. chairman Peter Harf — who lost his first wife to leukemia — DKMS has registered 1.7 million donors and helped to facilitate more than 13,500 transplants. Its fund-raising efforts are aimed at covering the $65 registration cost for marrow donors.

Coty Inc. linked itself with DKMS in 2006, said Bernd Beetz, Coty’s chief executive officer, who recently visited a family in Los Angeles in search of a match for their twin sons. “Their strength and courage really amazed me.”

Harf’s daughter, Katharina Harf, executive vice president of DKMS, said the funds raised that evening will allow the center to register some 12,000 donors for free.

“It’s easier to find a soul mate than a donor,” declared gala host comedian Mario Cantone, adding all it takes to join the match registry is a swab of the mouth with a Q-Tip. In a playful bid to get more people to join DKMS’ registry, he shouted into the microphone, “Go get swabbed, bitches.”

That sentiment was echoed, albeit in more watered-down versions, by gala honorees Cindy Crawford and Emanuel Chirico, who is a lymphoma survivor and chairman and ceo of Phillips-Van Heusen, parent company of Calvin Klein Inc.

Crawford also shared her personal connection to the cause, telling the crowd — which included Eva Mendes, dressed in a Calvin Klein gown, Carol Alt and Morgan Fairchild — that when she was 10 years old, her four-year-old brother lost his battle with leukemia. “Sadly for our family the treatments available to him, were unable to save his life,” said Crawford, adding, “The more people we have registered, the more lives we save.”

Peter Harf, reflecting on the birth of DKMS, said, “Love motivated our cause, science enabled it.”

The evening ended with performances from singer Natasha Bedingfield, along with Darryl “DMC” McDaniels and Sarah Connor.