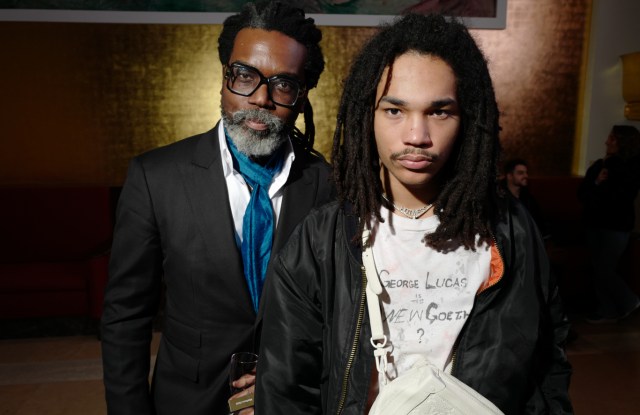 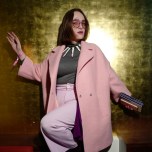 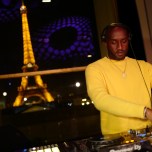 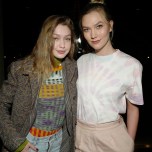 HEART OF GLASS: The environment was on people’s minds at a party thrown by Evian to mark its collaboration with Virgil Abloh to celebrate a new refillable, glass water bottle. As guests filed into the cavernous Palais de Chaillot, with its sweeping view of the Eiffel tower, talk centered around plastic bottles, recycling and tap water.

Luka Sabbat tends to go with the flow when it comes to water containers — whatever’s on hand.

“I don’t walk around with my own supply of water,” he said, citing the inconvenience. His father, Clark Sabbat, whose family is from Haiti — a country that he called an “absolute disaster” when it comes to plastics, is already using the new refillable glass bottle from Evian. Among environmental causes, Sabbat is working on turning waste into energy; his son recently partnered with the Natural Resources Defence Council on a project to promote climate awareness.

The pair’s environmental credentials include an enthusiastic embrace of secondhand clothing. Sabbat, the son, wore a vintage T-shirt. His father, when asked if he wears vintage items, was quick to answer:

“All the time! Where do you think my son got his fancy style from?”

Yaz Bukey, who has a weakness for specific brands of mineral water, takes to filling up smaller glass bottles for transportation. She recalled that her boyfriend in design school in the Nineties came up with the first crushable, plastic bottle for Evian. Now, three decades on, the accessories designer said she approved of the new design on the glass water bottles.

Abloh, Gigi Hadid and Karlie Kloss were among later arrivals. Hadid and Kloss took to the VIP corner of the dance floor while Abloh mixed the music.