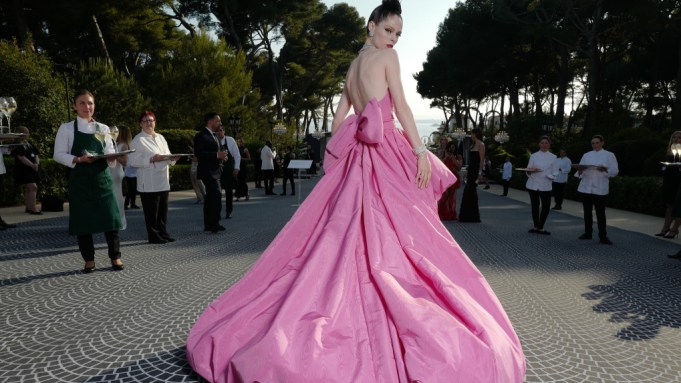 Between premieres, private dinners and all-night parties, there’s a lot of competition for the film festival’s biggest bash — but amfAR usually takes the Cannes cake. This year promises to be extra electric with Christina Aguilera, Ricky Martin and Charli XCX slated to perform as the Cinema Against AIDS gala fundraiser returns to the Hotel du Cap-Eden-Roc after a coronavirus hiatus.

“The Hotel du Cap is the ultimate dream. Being able to return this year feels just like we’re back ‘home.’ It somehow also adds pressure as we want this show to be very special and celebratory after a couple troubled years,” Carine Roitfeld told WWD. The French fashion editor will mark a decade of organizing the always-over-the-top fashion show that takes center stage.

If it’s even possible to make the evening more extravagant, that cake will be wedding themed this year. Roitfeld has chosen a twist on the traditional bride, setting “Let’s Get Married” as the evening’s moniker. “You know how much I love and admire Liz Taylor,” said Roitfeld of the late screen queen. Taylor cofounded amfAR in 1985 and worked tirelessly to advance the cause of AIDS research.

“I was always fascinated by her eight weddings and the way she would always reinvent herself while being true to her core. In the actual context, I feel like we should all be celebrating love and family, whether it’s given or chosen,” Roitfeld said. Wedding dresses “always make for the most impactful runway moment,” she said, while emphasizing the show will be gender inclusive. “You should expect unexpected looks. It’s not just about a woman in a white gown and a man in a black suit.”

Prada, Alexander Wang, Alexandre Vauthier and Off-White leaned in to tradition with white gowns, while Fendi and Tommy Hilfiger sent sleeker suits. Nensi Dojaka and Celine opted for bright pastels, while Gucci went for a bit of gilded glamour in gold and black.

“The designs that were sent this year are absolutely breathtaking,” said Roitfeld, adding: “They all understood the unexpected assignment.”