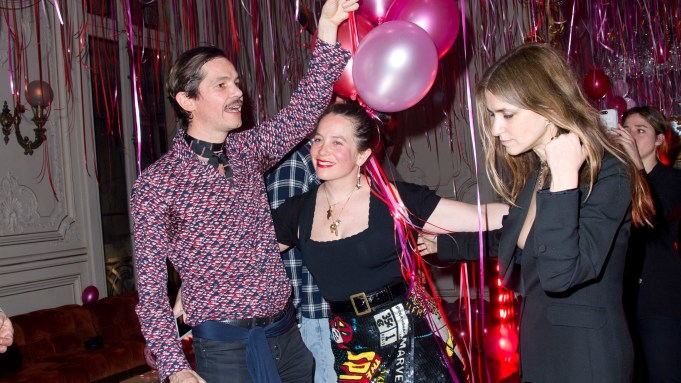 PARIS — Ezra Petronio laid on ginger beer, jars of candy and a playlist of Eighties pop for the party during Paris Fashion Week celebrating his 50th birthday, which was titled “La Boum,” after the cult French movie starring a teenage Sophie Marceau.

The first floor of the ornate Hôtel Le Marois was decked out with helium balloons, glitter balls and giant screens showing videos of songs selected by Petronio and DJ Michel Gaubert — think Pet Shop Boys and Olivia Newton-John. The party was organized by fashion producer Alexandre de Betak, who also brought out a giant birthday cake.

“We went to kindergarten together, so he kind of revisited our early parties, because the word ‘boum’ in French is what you call the pre-teen and teen parties when the parents empty the house,” Petronio said, in between greeting guests such as Christopher Kane, Anthony Vaccarello, Selah Marley and Audrey Marnay.

The party doubled as couples night for many of the guests. Alexa Chung arrived with Alexander Skarsgård, though the possibly on-again couple declined to pose together for photographs, instead repairing to a sofa in a corner. Anwar Hadid and Nicola Peltz also made an appearance.

Felipe Oliveira Baptista came with his wife Séverine; Jean Touitou with his spouse Judith, and Cédric Charbit with his partner Marianne. The Balenciaga chief executive officer said he enjoyed celebrating other people’s birthdays but not his own.

“I don’t really like organizing things for myself and I don’t like surprises — that narrows the options,” Charbit said with a laugh.

As Prince’s “Raspberry Beret” blasted from the loudspeakers, Yaz Bukey revealed her special birthday ritual. “I prepare a playlist, I take a chauffeur-driven car, and I have him drive me around Paris for an hour while I drink Champagne and listen to my music,” she said.

The jewelry designer had fond memories of her first parties, though she wasn’t really into ginger beer. “It was more like cigarettes and alcohol that we stole from our parents in Saudi Arabia,” she said with a grin.

As the night wore on, guests including Anja Rubik, Elie Top, Olympia Le-Tan and Joana Preiss hit the dance floor. For Petronio, flanked by his girlfriend Lana Petrusevych, it was a moment to mull what lies ahead.

“Thank god we work in a business that keeps us so youthful in our mind. We have Self Service magazine, the agency, my art direction, my photography, so it’s always about staying in tune with what’s happening, so it’s really not an issue. The age is nothing, it’s really more a state of mind,” he said.

“This year is a big year of change too in our business — a lot of shifts are taking place,” Petronio added. “We have to be part of this new way of thinking and imagine new ways of working, new ways of communicating. It’s interesting.”