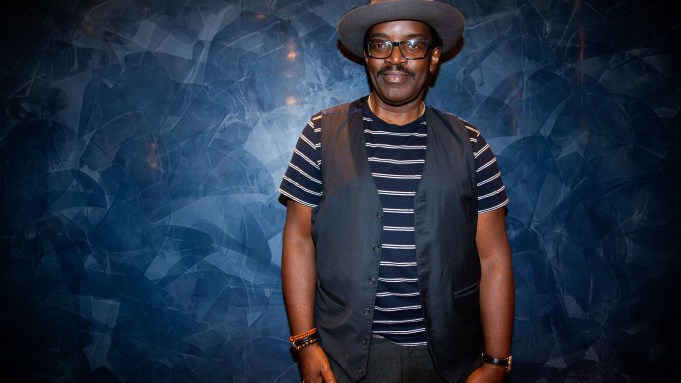 Sometimes, you have to go to Miami to meet a New York icon. On Tuesday night, hip-hop pioneer and visual artist Fab 5 Freddy was hanging out at the Nautilus Hotel, where he was unveiling new works in collaboration with Half Gallery and Harper’s Books.

“These are all kind of iconic heroes to me in different regards coming up,” said Fab 5 Freddy of the works, which include Bruce Lee, Jim Kelly, Grandmaster Flash and Afrika Bambaataa as bedazzled subjects set atop collages images. “The way I work, I think of it similar to the way hip-hop is made. I find images and I move it around digitally, kind of like I’m sampling, putting things together and remixing and then printing on canvas. And then me and my team, we apply these crystals, make it kind of come to life. It’s almost like a form of animation, when you move around the work there’s some movement going on with the light.”

As for the rest of the week, he’s keeping things relaxed. “I try to see good stuff but not get too overwhelmed. You can have art overload down here — you can OD,” he said.

Half Gallery’s Bill Powers linked up with the artist thanks to Richard Prince. “Maybe like two months ago, Richard Prince was like, ‘You’ve gotta go to Fab 5 Freddy’s studio.’ And I knew him from ‘Yo! MTV Raps.’ He’s a New York legend. And I knew he was friends with Glenn O’Brien, but I’d never really seen his paintings before. So Richard was like, ‘I just bought three of them, you’ve gotta get over there.'”