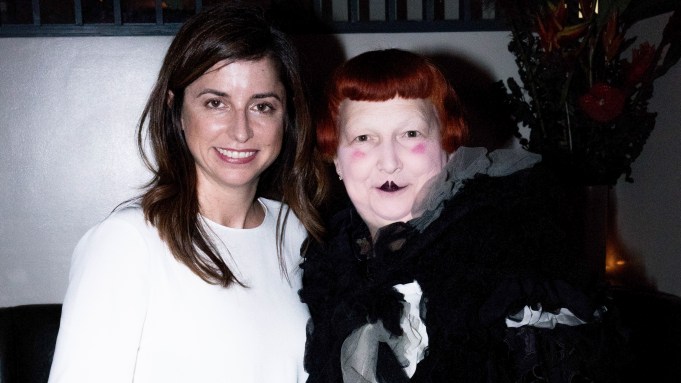 On Wednesday, San Francisco Bay-area based editor (and former WWD alum) Emily Holt hosted the first of what will be a series of designer dinners for Fab.com. Friends of Holt and Fab’s featured designers for the night — Jeff Rogers, Tracey Tanner, Hisham Bharoocha and Caeden and Aelfie — gathered on the Lower East Side at Happy Ending for a very Brooklyn-heavy evening — from the art folk seated in booths, succulents and Stellas atop each table.

The online retail shop will rotate through creative directors; Holt, who also worked at Vogue, has been at the helm for six months.

“My stuff is handmade,” Tanner, who designs a line of leather bags, explained. “I’m trying to make the transition to having stock — it’s an uptown problem, but I’ve been selling out as I’m making it. I feel unbelievably lucky.”

The designer, who’s been making her bags for 15 years, attended Pratt Institute for fashion designer and then launched her line. “Once I worked with leather, I was like, there’s nothing else like it. And it’s crazy, because I’ve been a vegetarian for 25 years,” she said. “I kind of have a very Native American outlook on it. I’m using the remains of what other people eat. At this point it’s really more of a texture thing than anything else.”

“With the bracelet, we wanted to create something that people would want to wear, even without the tech inside,” said Caeden’s Soyoung Park. The brand is known for their headphones, which come in standard and Bluetooth variations. “I think a lot of times tech companies want to partner with fashion companies to try and make the tech look better. When we design the product, we have the team build in-house, to design the two parts together.”

Brooklyn-based illustrator Leah Goren created hand-painted fashion illustrations of the guests during the cocktail hour, done on the cover of pocket-size notebooks. “Isn’t that just the cutest?” one diner said, holding hers up to her face.