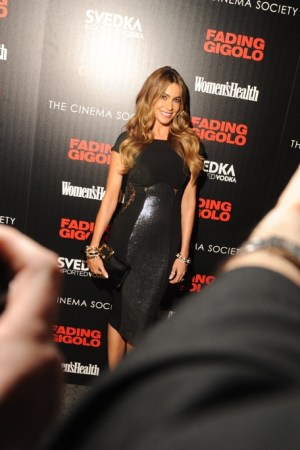 Amidst all of the city’s changes, a few elements remain the same — New Yorkers are always looking for a little bit of love and, when push comes to shove, a creative way to keep themselves financially afloat.

John Turturro riffs off this idea in his latest movie “Fading Gigolo,” playing the part of a middle-aged gigolo alongside Woody Allen, his on-screen pimp. “I think we’ve certainly lost a lot of great small establishments in New York,” Turturro said, reflecting on the city’s evolution over the years. “We touch on that in the movie. There’s something really nice about going to a place where you know the person. You can play chess there, some people smoke pot, but it’s your store and you can do what you want.”

He was in Manhattan Friday night for the movie’s premiere, which drew costars Vanessa Paradis and Sofía Vergara as well as Edie Falco, Helena Christensen, Zani Gugelmann, Pablo Schreiber, Albert Hammond Jr. of The Strokes and designers Nanette Lepore and Nicole Miller. Allen did not turn out.

Turturro, who wrote, directed and acted in the film, has managed to avoid the cynical outlook that plagues many lifetime New Yorkers — he thinks that Mayor Bill de Blasio is “doing well” and “trying to do the right things” and remains optimistic about the Knicks’ future. “I’m a season subscriber and a sufferer,” he said. “[Phil] Jackson I remember as a player. He’s a very bright man, I’m happy he came back.”

He was walking the press line with his wife and his son Diego, who plays a minor role as Paradis’ son in the film, a part he had to audition for.

The French actress, who plays a widowed Hasidic woman and unlikely love interest, was sporting a new, shorter do and showing a little lace under her Chanel suit. “I didn’t know anything about the Hasidic community,” said Paradis. “We walked in Williamsburg before we shot the movie. It was really special. A different planet…like you’re in different time almost.”

After the screening, which was hosted by the Cinema Society and Women’s Health magazine, the crowd moseyed over a few blocks to Bar Naná, where the cocktails made reference to the movie’s racier moments: Guests could order up a Bedroom Bliss, Menage A Trois or The Gigolo.

For all of the gigolo talk, there were none in sight.

“I was like, this is not real. That was the only part of the movie that was sort of romantic,” said Genevieve Jones, asked if she had ever heard of or met a gigolo herself. “I didn’t even know there were straight ones.” Christensen, however, hasn’t ruled out the idea. “In this crazy world, everything exists. I’ve never met one, no,” she said. “Maybe when I’m 83.”