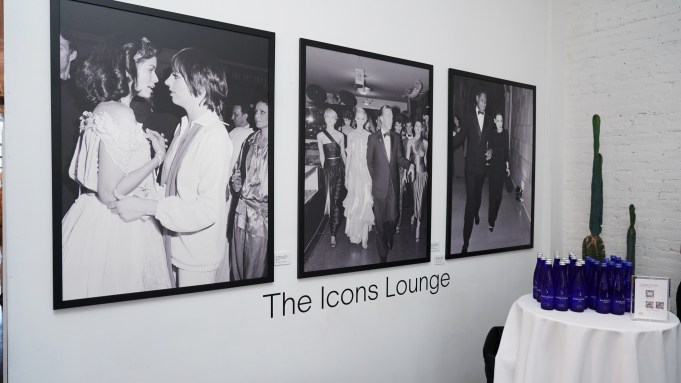 The past is never over in the world of the fashion.

However, self-referential and congratulatory this might sound, the Fairchild Museum is a place for discovery, if only temporarily. On view through Saturday at AG Studios at 52 Walker Street in Manhattan, “A Matter of Style” is a Fairchild archive exhibition.

Along with oversize photographs of decades of designer runways, street style, Ladies Who Lunch and New York City nightlife, there are light boxes flashing images and QR codes with audio content. During a preview Friday morning, guests and staffers leaned in and stepped back to get a better perspective of the swirl of trends, history and some long-forgotten faces that surrounded them. The exhibition included such nuggets as Andy Warhol and Salvador Dalí turning up together at the 1975 premiere of “Shampoo,” Michael Jackson and Madonna at Swifty Lazar’s 1991 Oscars after party or Diane von Furstenberg hanging out with Fernando Sánchez at Studio 54.

An assortment of images are on display in sections like Runway Reel, Tailor Made, Drawing Class, the Lunch Set, the Icons Lounge, Mentalities, Beauty and Tailor Made. Near the entrance of the third-floor gallery is a large photograph of WWD’s legendary publisher John B. Fairchild. A lightbox reflects some of the photography-free early pages of WWD and there is also a flash of former editor in chief Ed Nardoza’s April 2015 front-page letter from the editor that signaled the shift from a daily print edition to an all-digital model.

Nordstrom’s women’s designer fashion and editorial director Rickie De Sole said, “The past is informing the future. That nod to nostalgia is playing a big role, coming out of the pandemic. Versace has gone back to its archives. All of the brands are going back to their archives and are bringing that forward. It’s exciting finding where it all started.”

Standing near a quartet of runway photos from the late ’70s featuring Pat Cleveland, Karen Bjornson and other leading models of that era, Fern Mallis also spoke of the value of looking over your shoulder. “I don’t think you can go forward without looking back and knowing where it all came from. There is so much extraordinary history here that I hope that designers and other people in the industry will come and see this and learn from this.”

Students could “definitely” benefit from seeing such images, as well as “seasoned people, young designers and older designers,” Mallis said. “It’s recognition and it’s acknowledgement. Everybody needs as much of that as possible, because it’s such a cut-throat, tough industry. To see your work celebrated here in a milestone is very important.”

Mallis recalled how during her extended run as the executive director of the Council of Fashion Designers of America — which is marking its 60th year — there was talk of securing a building to open a museum. “Obviously, that never happened. But there really needs to be a fashion museum in New York that celebrates all of this.”

A runway photo of a model wearing a graffiti-laden Stephen Burrows ensemble (that was reminiscent of the Balenciaga caution tape catsuit that Kim Kardashian walked the runway in in March) offered another history lesson. Walking toward the image, fashion journalist and author Teri Agins pointed out the photographers were stationed with cameras raised along the sides of the runway. “Before there was the photographers’ pit, they had all the photographers shoot along the runway,” she said. “I wrote about this in [the 2014 book] ‘Hijacking the Runway: How Celebrities Are Stealing the Spotlight From Fashion Designers.’ You did not want to sit in the front row, because you could not see. If you were a guest, you did not want to sit in the front row. They didn’t start the [photographers’] pit until Seventh on Sixth. They brought the runway in closer. That’s when the front row was created.”

Having landed her first job after graduate school at Fairchild’s DNR in 1977, Agins recalled starting out in the Chicago bureau before relocating to New York. “The photos that DNR and WWD recorded is history that no one else has,” she said.

While working on one of her books, “The End of Fashion: The Mass Marketing of the Clothing Business Forever,” Agins relied on the Fairchild archives for research. “Fairchild was the only place that had this,” adding that the Fashion Institute of Technology had winnowed its hard copies of archives. “Even the Costume Institute [at the Metropolitan Museum of Art] didn’t have all this. Fairchild is the only place that has this incredible repository of fashion history that goes way back. There are all of the details about designers, stores and just everything. Manufacturers — nobody has as much about factories and manufacturers,” adding that she too would love to see a permanent museum that includes digital access.

Mention of a WWD report of the Marx brothers doing an event at Bloomingdale’s, during the Great Depression jogged Mallis’ memory. “I remember when Queen Elizabeth visited Bloomingdale’s [with Prince Philip on her second visit to New York City in 1976].”

Researching in the WWD archives at its former West 34th Street offices, Agins said, “I remember I would go over there very early in the morning and I would get so distracted. You would see something that you didn’t remember and you would go in that direction. But you didn’t even need that. It’s just a trove of so much incredible fashion history. It has retail. It has everything. This is really exciting to see this.”

WWD’s former archives librarian Merle Thomason was “like an encyclopedia with all those memories. When I was working on ‘The End of Fashion’ in 1996, 1997, she could steer me to what I was looking for. She was incredible,” Agins said.

After studying many of the photos and light boxes on view for more than an hour Friday morning, Joseph Abboud said, “It gives me a chill, because we have such a rich history in womenswear and menswear.” Gesturing toward a 1977 photograph of Ralph Lauren with a few models hailing a cab in New York City’s grittier days, he said, “This is the tip of the iceberg. When you look at these images, you realize how many more Fairchild has. I wish we had more of this. Women’s Wear is a franchise really, when you think about all the history. I could spend days going through the archives.”

Images of Halston, Jacqueline Kennedy and high society mavens were among his other favorites, Abboud said, “American fashion is so rich and so amazing. I don’t think that it’s really had its full exposure yet. I’m hoping this [exhibition] will be taken from city to city. It isn’t just about the fashion. It isn’t [a matter of] here’s a blue skirt and a red dress. It’s really the story. Right now, storytelling is everything. i think Fairchild and Women’s Wear have a story to tell.”

Enthusing about the street photography and how he misses the days of the late Bill Cunningham, who was given his first camera by Mr. Fairchild while working at WWD, the designer said, “That’s what real fashion is. It’s about what people do in their lives. It’s not just about the runway. And menswear has never really been about the runway. It’s about what men wear. As a menswear designer, you have to find a fine line between what you show and how you can connect that to men.”