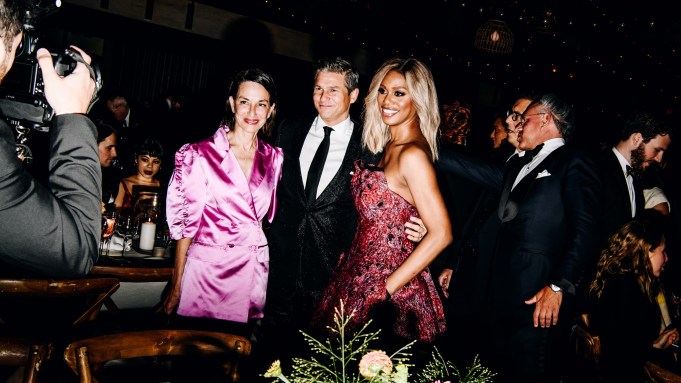 For those on the New York society circuit — hi, how are you, how were the Hamptons? — the start of fall isn’t marked so much by Labor Day weekend (or by NYFW, for that matter) but by the first major event of the season, the Metropolitan Opera Opening Night Gala.

The 2019 season kicked off with “Porgy and Bess,” a production that has not been performed at the Met since 1990 and entered the season under much anticipation, for its portrayal of race by an opera company that has not exactly been praised for its diversity. The three-plus hour production had audience members shouting out praise throughout the performance, and both the intermission cocktail hour and subsequent procession to dinner saw attendees deep in discussion.

During cocktails, Karan stayed close to Iman on the second floor by a standing table; “Hadestown” costars turned couple Carney and Noblezada made a date night of the evening; Copeland and Peck, darlings of the ballet world, posed for photos together, while society queens made dramatic elevator entrances and ensured photographers caught their gowns in all their glory.

Between the performance and dinner, Ariana Rockefeller was taking in the evening by the plaza’s fountain.

“It’s [the gala] been a tradition for several years now,” she said, dressed in a Markarian gown. (Its designer, Alexandra O’Neill, is her second cousin.) “I love Nina Simone, and Nina Simone sings the song ‘I Loves You Porgy,’ which is one of my favorites, so I loved that. The music was gorgeous.”

The Rockefeller family usually summers in Maine, but Ariana was in Europe for most of the season, with her equestrian duties.

“It’s always amazing being with [the horses] and riding but it’s nice to be home,” she said. Her fall social calendar includes the ABT gala, the God’s Love We Deliver benefit, of which she just joined the board, and in a few weeks, she’ll present an award on behalf of her grandfather for the Americans for the Arts. “It’s going to be a busy wonderful fall.”

Inside at dinner, the Koch Theater had been decorated in Charleston splendor: vines and basket lanterns hung from the ceilings, as donors and VIP guests alike sat down to a meal of Southern fare. Cox, fresh in from the Emmys the night before, held center court at the main table, but it was the arrival of the show’s principle performers — Eric Owens as Porgy and Angel Blue as Bess — who drew the biggest cheers from the audience when they arrived midway through the meal, having changed out of costume and into black tie.

“This is why the Met exists — you shoot for the moon, and sometimes, like tonight, we actually stick our landing,” said Peter Gelb, general manager of the Met. “As you all know, there is no such thing as perfection in the performing arts. But I’ll happily take this production, this performance tonight, as the next best thing.”