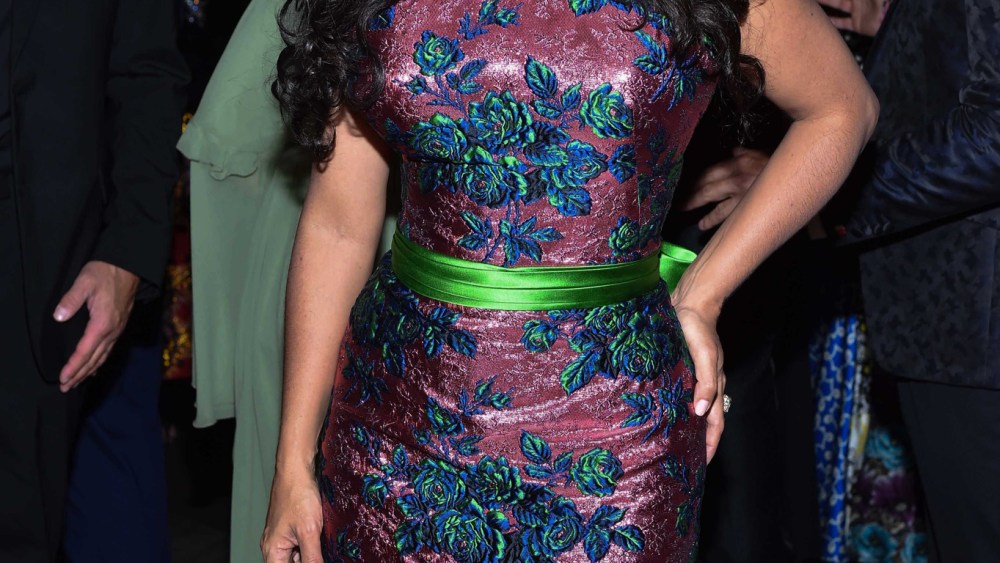 VENICE — “She is unstoppable — a force of nature,” said Livia Firth of Salma Hayek. “She is a tornado of ideas,” concurred Marco Bizzarri, president and chief executive officer of Gucci, describing the actress and activist. Hayek was the second recipient of the Franca Sozzani Award, bestowed in honor of the late Vogue Italia editor in chief on women who stand out for their artistic careers and their social commitment.

Approachable and spirited, Hayek said she was both “grateful and humbled” by the recognition. “Frankly, I was surprised by how much I was impacted by this amazing award,” said Hayek at the dinner event, which was held Friday night during the Venice Film Festival at the Old Granaries of the Belmond Hotel Cipriani on the Giudecca island. “I could not believe they were going to give it to me. I said, ‘My God, did they ask everybody and they all said no?’” she joked.

When reminded of all her work on social issues, Hayek conceded: “I have been doing a lot for women and equality for 25 years. The only thing that is different now is that everybody is talking about [this topic]. At the beginning, I did a lot for domestic violence, which also Franca did, too, and nobody wanted to talk about this, it was not sexy or cool and nobody wanted to be involved in these charities. I am on the board of Kering and now that everybody is on board, we have to work with men to create a dialogue with them because they are very confused. My strategy that I proposed is let’s support organizations [dealing with] what does it mean to be a man and what does it mean to be a woman and now this is part of the agenda. I don’t want to do what everybody does — like Franca.”

Sozzani’s son Francesco Carrozzini, handing the award to Hayek, compared the two women’s “strength, creativity, individuality” and attention to social causes. “When it’s never been done only got my mother more excited, and the same is for Salma.”

One difference does stand, however. “I hear Salma cooks every night. My mom had problems toasting bread,” Carrozzini said to a round of laughter. A sudden thunderstorm — which even caused a brief interruption of the premiere of “A Star Is Born” with Lady Gaga and Bradley Cooper at the Lido nearby — didn’t keep away the almost 200 guests, including Hayek’s husband, Kering chief François-Henri Pinault; Pierpaolo Piccioli, who gave “A Star Is Born” a thumbs-up, saying it was “beautiful”; Colin Firth; Renzo Rosso; Luke and Lucie Meier; Remo Ruffini; Federico Marchetti; Alberto Biani; René Caovilla; Carlo Capasa; Raffaello Napoleone; Gaetano Marzotto, and Sara Battaglia, among others.

Alberta Ferretti, flanked by her brother Massimo, said she felt refreshed by the summer holidays spent in Ibiza — a regular August break that also helps keep her grounded. “It’s important to go out, see the world, see how women live to understand them because I work for women,” said Ferretti. “And it’s very important to come back with new energy.”

Ferretti also remembered Sozzani and the advice she would give when asked, which helped the designer  make important decisions throughout her career. “When I thanked her she would say — ‘Silly, what I tell you, I tell everyone, not because you are more special, but the fact is that you listen —sometimes, not always.’”

Matteo Marzotto was back from a boat trip on the coasts of Croatia. “Sailing? No, you know my love for motors, it’s a motor boat,” said Marzotto, who regularly flies his helicopter.

Although not a sailor either, Valentino’s ceo Stefano Sassi, who flies gliders, was also on a boat in the Mediterranean off Greece and Turkey. “I will be staying in Venice for the weekend to see the premiere of ‘Suspiria,’” said Sassi, referring to Luca Guadagnino’s latest film.

Andrea Incontri said he would present a capsule collection for Alcantara during Milan Fashion Week, as part of a sustainability project. “It’s a total look of 20 women’s designs, with shoes in collaboration with Sergio Rossi,” he explained.

“The Oscars is always the same statuette, as is the Palme [d’Or] in Cannes, also by Chopard, and going forward this will be the award,” said Firth of the design, which is crafted from Fairmined-certified ethical gold. “And the fact that it is a woman is not a coincidence,” she added.

About the Green Carpet Awards event to be held in Milan on Sept. 23, Firth said, “We’ll have even more surprises this year, last year was an incredible evening and we thought how are we going to replicate it? But we are very happy about how it’s shaping up.”

It was a meeting of the movie and fashion industries as A-listers Cate Blanchett, Colin Firth, Christoph Waltz and Jeff Goldblum participated at the event at the Cipriani Hotel, which again drew the likes of Pinault, Bizzarri, Piccioli, Sassi and Incontri.

Blanchett, who said she was planning to attend the award ceremony, said it was “a brilliant initiative,” praising Livia Firth as “a real driving force to positively work with brands that have the capacity and leadership position within the industry to make those changes and by example show how to make the economic and cultural shift in the business.”

Blanchett is no stranger herself to sustainability issues. “When my husband [Andrew Utpon] and I ran the Sydney Theater company, one of the first initiatives was to set up solar panels — the theater uses so much electricity,” she said. “We went off the grid.”

Blanchett was in Venice for “pure pleasure,” she explained. “My son has finished his exams, he wasn’t able to come to Cannes [Film Festival], so we are here. There is a brilliant lineup, some really amazing films that in previous years wouldn’t have come to Venice,” she said, describing Alfonso Cuarón’s “Roma” as a “masterpiece,” and citing “Suspiria,” “A Star Is Born,” “The Favourite” by Yorgos Lanthimos and “Peter Loo.”

Goldblum also highlighted the importance of the Green Carpet Awards and said he hoped to attend but said he will be touring with his jazz group through London, Berlin and Paris as a new record album is coming out. “I am here in a movie that is in competition, ‘The Mountain,’ so that’s my story, but I’d love to come to Milan,” he said affably, speaking fondly of his wife Emily nearby. “Look at her, can you believe it? How about that, she is a rhythmic gymnast for Canada in the Olympics, we have been together for seven years and we have two children, Charlie Ocean and River Joe, three and one years old.”

As reported, organizers revealed that The Visionary Award will be bestowed to Vogue international editor Suzy Menkes and Capasa said that he was first impressed in 2009 by her interest in sustainability, which triggered his own focus on the issue. “At the time, I was working with my brother [Ennio] on Costume National and I started thinking about sustainability in fashion,” he explained.