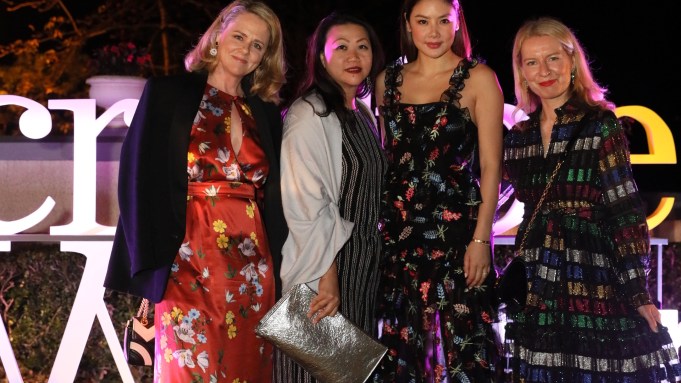 HONG KONG — The weeks between Christmas and Chinese New Year are a sort of business and social limbo. With the two holidays being such key occasions and both offering a week off for weary city-dwellers, brands tend to lie quiet as Hong Kong hovers in vacation mode.

But in March, the energy of the city fully transforms as Art Basel rolls into town, bringing with it a high-flying crowd that the fashion world is more than happy to tap into. With an exceptionally high concentration of the wealthy milling about — a Willem de Kooning piece sold for $35 million within hours of the fair opening — brands didn’t miss an opportunity to show off their arty side, with Dior, Cos, Louis Vuitton, Moda Operandi and others putting on all manner of art installations, talks, dinners and parties.

On March 19, Porter magazine got things going by hosting a chat at the Upper House. Executive brand editor Sarah Bailey moderated the panel focusing on “Incredible Women in Art,” before taking the crowd to the beachside in Repulse Bay for dinner, which saw French actress Ana Girardot and designer Vivienne Tam among the guests.

There was also the amfAR gala, which this year featured performances from Kylie Minogue and Tove Lo, while honoring the artist Kaws, although it was appearances from Aussie stunners Shanina Shaik and Liam Hemsworth, which seemed to have the ballroom buzzing.

In Shanghai, Dior has been busy staging a couture show and the release of a new art book, but here in Hong Kong, the French house situated itself on the third floor of the Basel fair for its Lady Dior exhibition, where more than 30 different takes of its signature bag were on display, using materials from glass to wood and even pheasant feathers. Taiwanese artist Liu Chih-Hung was one of the new artists the brand tapped, using rusted metals and lights in a throwback to the mosquito-lanterns of his childhood.

“The idea comes from the mosquito-catcher which is very common in Asia. You see the light? It’s used to catch mosquitos and other insects, it’s similar to a luxury product, attracting the gaze of shoppers,” Liu explained.

At Art Central, a fair focusing on more affordable artworks, Off-White and Jimmy Choo took over a corner for a “floral guerilla moment” in an exhibition titled “Hand & Rose.” Created by artists Sarah Lineberger and Awol Erizku, the two juxtaposed a truck in the backdrop with bright flowers erupting all around it, with viewers able to take away custom bouquets until April 1.

The satellite fair also worked with Lane Crawford for its art program enabling people to create their own digital masterpiece using motifs from cult graphic design art duo Craig & Karl. And although not explicitly doing an art theme, Jil Sander’s Lucie and Luke Meier were also passing through town — entertaining at a cocktail and dinner to celebrate their collaboration with Joyce.

During the week, the H Queen’s Building served as a magnet for the arts-inclined crowd. The tower, which only recently flung open its doors, houses eight art spaces including heavyweights like David Zwirner, Galerie Ora Ora, Hauser & Wirth and the Pace Gallery. Loro Piana’s immersive installation called the “Gift of Kings” took over the building’s 18th floor, putting on display until the end of the month an incredibly soft and rare wool sourced from breeders in Australia and New Zealand, of which only 2,000 kilos are produced every year. The interactive and tactile experience takes visitors through the process of the fabric production and includes an area for people to take a swing in whimsical hanging chairs.

“Disappearing” artist Liu Bolin was at Aberdeen Street Social on Tuesday, toasting his latest works with Basel-sponsor, Ruinart, following a series of Moncler ads. The Chinese artist had used his signature camouflaging technique to paint himself to blend into the backdrops, this time featuring the Champagne-production journey from vineyard to final bottling.

On Wednesday evening, Cos hosted an artist’s talk to discuss the process of reinvention with design world figures including Clark Bardsley, Lorene Faure and Kenny Kinugasa-Tsui of Bean Buro, and later on Moda Operandi’s Lauren Santo Domingo threw a party with Yana Peel, who leads Serpentine Gallery. The fete at brand new space, Fools and Magicians, drew a posh crowd with guests including Victoria Astor, Ivan Pun, Maria Buccellati, Alia Al-Senussia and Eugenie Niarchos, to dance to tunes spun by DJ Mimi Xu.

There was still one more major party, with LACMA putting on a big bash on board the iconic Jumbo seafood restaurant in Aberdeen on Thursday, but after that people sailed into the long Easter weekend for some well-deserved recovery.