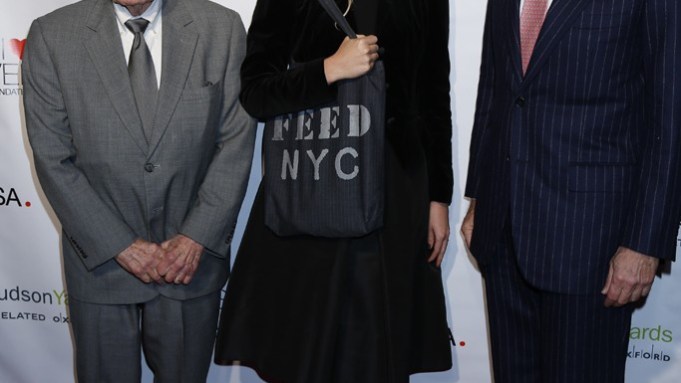 That’s the way Allan Ellinger, chairman of the organization, described Wednesday night’s event at the American Museum of Natural History. Because of the “horrific” situation in post-Hurricane Sandy New York — which was exacerbated by a nor’easter the night of the event — the group opted to cancel the seated dinner portion of its annual gala and donate the meals to Citymeals-on-Wheels. Instead, it hosted a fast-track cocktail party where it honored Related Companies’ Stephen Ross, Feed Foundation cofounder Lauren Bush Lauren and Boscov’s Albert Boscov.

Ellinger said the goal of the group is to raise at least $50 million in product for victims of Hurricane Sandy, and so far, it has received over $15 million in donations. “We must move now and we must move quickly,” he said.

Coach chief executive officer Lew Frankfort presented Ross with his award, pointing out that not only does Related’s Time Warner Center house one of the company’s best-performing stores, but Coach recently signed on to move its headquarters to the developer’s Hudson Yards project. That prompted Ross to joke that in Frankfort’s case, fashion does indeed deliver.

Christian Courtin-Clarins of Clarins said his company has already given away 1.5 million meals to children around the world through its support of Lauren’s Feed bag project. In accepting her award, Lauren said her organization has provided 60 million meals since its founding and commended Fashion Delivers for turning “surplus into survival” for the victims of national disasters.

Boscov, who received the John Pomerantz Leadership Award, addressed his diminutive height and his age, saying: “I am alive and I am well — and I am also standing.” He recalled how four years after selling his family business, he bought it back at a bankruptcy court auction and today, Boscov’s has battled back to $1 billion in sales and has posted the three biggest years in the company’s history. “We’re the largest family-owned department store in America and we’re also the smallest department store in America. There is no one else,” he said.

The event raised just more than $1 million for the organization.