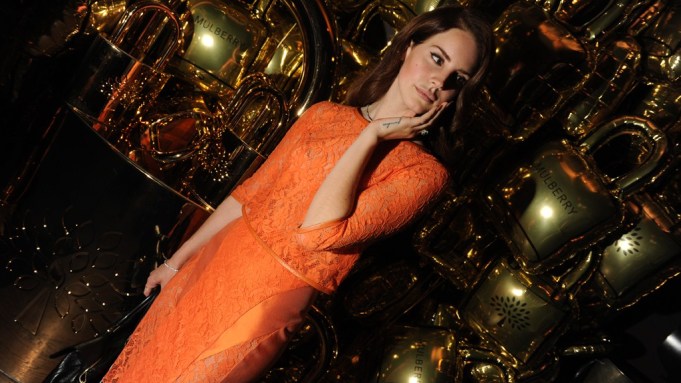 On Friday night, Lana Del Rey was in the basement of the restaurant Crown on New York’s Upper East Side looking for a little privacy.

“Here, we’ll come into the wine cellar, is that OK?” the singer said as she made her way past stacks of crates and boxes in a neon orange lace Mulberry cocktail dress. “Is this  weird?”

Del Rey had just performed a short set of songs at a dinner Mulberry put together in honor of Frieze New York, the first U.S. staging of the British contemporary art fair that proved wildly popular in its four-day run at Randall’s Island, which wrapped up Monday. Del Rey, a pop phenom whose reference-heavy torch songs and accompanying videos sit at the intersection of music, art and fashion (and have earned her champions and detractors in each field), has become something of a stock player for Mulberry. She performed for the brand during London Fashion Week and creative director Emma Hill has named a bag, the Del Rey, after her.

“It reminded me of me,” the designer said before dinner, remembering her first encounter with the singer’s work on YouTube, citing specifically her use of an old “Looney Tunes” clip in the video and likening the whole thing to a mood board. “I always have a cartoon…and something chic.”

“I used to show the videos to people and I could tell they really didn’t get it, because there was no narrative it was just a collection of images that I felt compelled by,” she said. “Like the way you sometimes see a person and you haven’t spoken to them, but you know you were just cut from the same cloth. You can just tell. I just started composing different pieces of footage I had found based on my intuition.”

Del Rey’s performance upstairs had been imagery free. Standing alone beside her pianist and guitarist, the singer put together a short, stark performance that won over the fashion and art crowd that included Alexa Chung, Albert Hammond Jr., Lauren Remington Platt, a full set of Clarins, as well as Frieze Projects curator Cecilia Alemani and Frieze founders Matthew Slotover and Amanda Sharp.

“I do have to be careful about what the actual sound is like,” Del Rey said of her performance with a laugh. It seemed like an oblique reference to her much-maligned performance on “Saturday Night Live” a few months ago.

“I’m the only one in the house; just me and a little guitar,” she said.

Did she still find such performances intimidating?

Mulberry wasn’t the only British fashion concern to help Frieze make its entrance into New York society over the weekend. On Saturday night, London-based Net-a-porter, and chief executive officer Natalie Massenet, hosted its own Frieze-themed bash at Chelsea’s Hotel Americano in honor of the fair’s gallery night. Among those taking the air at the hotel’s rooftop bar for cocktails were Sarah Burton, Eddie Borgo, Jenna Lyons, Olympia Scarry and an electronic cigarette-brandishing Cecilia Dean. The breakneck schedules of fashion designers are not without their downsides. Of three asked — Jason Wu, Christopher Kane and Olivier Theyskens — none had yet made it to Randall’s Island.

“We’ll have to see about tomorrow,” Kane said with a smile as he waited for a drink at the bar.