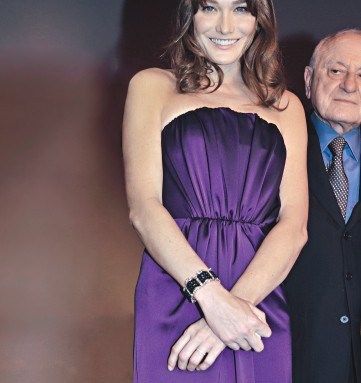 It was all about Carla Thursday night in Paris when that other glamorous first lady, Mrs. Bruni-Sarkozy, swept into the annual Sidaction AIDS benefit gala in an Yves Saint Laurent strapless column — her first appearance at a fashion event.

“It’s a wonderful evening — it’s so crowded,” she said as Pierre Bergé tugged her toward his table, shooing away journalists. “He’s the boss,” she said apologetically.

Nobody minded as the French fashion world celebrated the evening — and the end of another couture season. “Maybe she’ll sing,” Jean Paul Gaultier cooed hopefully.

Gaultier was still on a cloud after having Ines de la Fressange tear up the runway at his Wednesday show — something she first did for him at age 16. “You know she’s like that 24 hours a day,” he marveled. “She’s like an eruption.”

François Lesage just blew in from his embroidery ateliers — and, boy, his fingers must be tired. “The most elaborate pieces at Chanel took 500 to 900 hours,” he said, noting he’s marking his 60th anniversary in the trade. “Couture is a dream.”

“She’s beautiful and thoughtful; I have so much respect for her,” enthused Vanessa Paradis of Bruni-Sarkozy. Paradis arrived with her sister, Alysson Paradis. “I was supposed to be on stage tonight. I’m performing in the ‘Vagina Monologues,’ but the show was canceled because of the [French general] strike,” Alysson Paradis said.

“Sizzle” a.k.a Cécile Cassel, is certainly going to heat things up come the Cannes Film Festival. “It’s my new stage name — I’m writing and producing music now,” said the French actress, adding she may make her first appearance as Sizzle in Cannes where her new film “Ex” will be presented. Cassel sat next to Virginie Ledoyen, decked out in a somber Louis Vuitton number. “I dress simple in these times,” said the actress.

Laetitia Casta, also in Vuitton, had just flown in from Miami, where she’d been shooting the Bulgari perfume campaign with Mert Alas and Marcus Piggott. But Casta has even bigger shoes to fill: She said she’s about to start work on a film about Serge Gainsbourg, playing Brigitte Bardot.

Diane Kruger and Joshua Jackson couldn’t wait for the first lady to show — although Jackson wasn’t quite sure which one she was. “Michelle?” he asked, referring to new American First Lady Michelle Obama.

Wearing Nina Ricci, Kruger said she has just wrapped Quentin Tarantino’s “Inglorious Bastards” and is shooting a couture fashion layout for Italian Vogue this weekend. “I play a German movie star who is also a spy for the British,” she said of the Tarantino movie as she slid into her seat at the Ricci table, which was hosted by designer Olivier Theyskens and a beaming Manuel Puig.

Mélanie Laurent, in Sonia Rykiel, just wrapped the same film as Kruger, alongside Brad Pitt — “Yes, you can be jealous,” she said.

After the first course, Bruni-Sarkozy slipped out and returned with a bigger boss: French President Nicolas Sarkozy, whose arrival prompted a standing ovation.

“Her voice is so sexy! How do you get a voice like that?” enthused Mischa Barton, in Elie Saab.