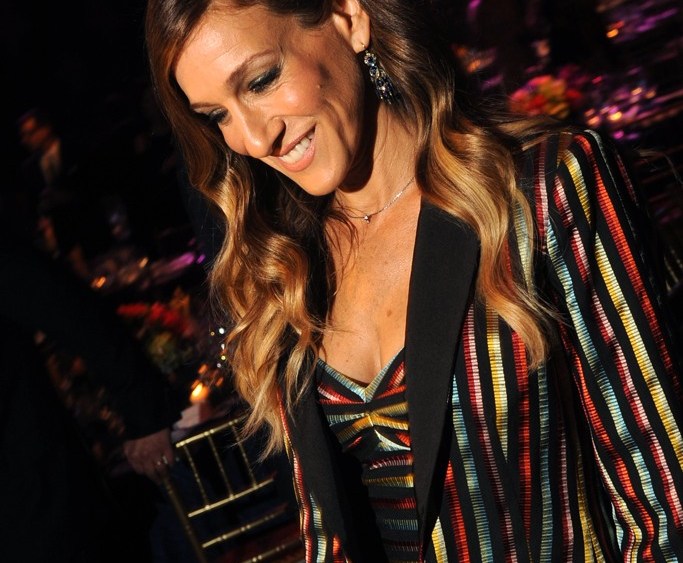 If Fashion Group International had a prize for comic relief, it would no doubt go to Neiman Marcus Group’s Karen Katz this year. (Sorry, Simon Doonan, the Night of Stars’ longtime court jester who nonetheless gets points for setting up Katz.)

“I have been known to use a Neiman Marcus bag when I am going to hyperventilate,” said Katz at Thursday’s gala, where she was an honoree. “But if I am going to be really sick, I pick up a Saks Fifth Avenue bag.”

Katz was responding to Doonan’s opener, an amusing tale of a twisted dream he had about a slumber party gone awry at honoree L’Wren Scott’s house. It started with his inability to reach a 10-mile-high doorbell and featured all the award winners of the night, including Katz and Superstar honoree Carolina Herrera. “Suddenly from behind me there came a terrible rumbling sound and a cerise-colored Hummer crashed through the fence and came barreling towards me,” Doonan said. “Carolina Herrera was behind the wheel, driving toward me in a homicidal fashion. ‘Stop,’ I yelled. ‘Please don’t kill me.’ ”

Doonan’s subconscious provided plenty of material — “I’ll let my hair down tonight so you can climb up Rapunzel-style,” Scott said — but not everyone took the bait. Other honorees included Derek Lam, Gareth Pugh, Annabelle Selldorf, James Gager, Nicola Maramotti for Max Mara’s Maramotti family and Jon King of Tiffany & Co.

As in the past few years, the lengthy speeches — Sarah Jessica Parker, Viola Davis and Glenda Bailey were among the presenters — made the night drag on, prompting another gem courtesy of Humanitarian Award winner Wynton Marsalis. “I am going to prove I am a humanitarian by not talking,” he said.

Karl Lagerfeld arrived fashionably late, around 9 p.m., in time to hand Haider Ackermann his award, to thunderous applause. “Thanks for all this attention, but I was not the first choice,” Lagerfeld told the crowd. “The first choice was Tilda Swinton.” Ackermann was clearly moved by the accolade, thanking his team and Lagerfeld in his speech. “As Yoko Ono said once, ‘Dreaming a dream alone is only a dream, dreaming a dream together is reality.’ ”

With a theme like “dream catchers,” the event gave some the opportunity to reflect on their aspirations. Renée Zellweger sat at Herrera’s table with Patricia Lansing, Kelly Ripa, Mark Consuelos, Seth Meyers and Alexi Ashe.

Herrera, for her part, said she is still full of dreams.

“I think you never stop, because it’s a fantasy,” she said. “And if you stop fantasizing, you’re kaput.”