Carolina Herrera, Ruben and Isabel Toledo, and others gathered at the Knickerbocker Hotel to toast 85 years of the Fashion Group International. 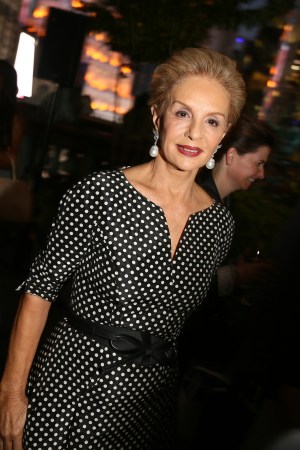 Though it had been a long week of fashion celebrations, there was one more to commemorate on Thursday night. The Fashion Group International marked its 85th anniversary with a cocktail reception at the Knickerbocker Hotel in Times Square that drew everyone from Carolina Herrera and Norma Kamali to Misha Nonoo and Wes Gordon.

FGI was created in 1930 as “a platform for women,” FGI’s president, Margaret Hayes, said. “In the Thirties there were very few careers open to senior women. The fashion industry gave women a great platform to excel.”

The party on Thursday was a testament to the progress made over the years.

“I think it’s a fantastic idea, promoting fashion all over the world and keeping the fashion world together, in New York,” Herrera told WWD.

“The fashion industry always needs a friend,” Norma Kamali told the crowd. “You always need a place to go where somebody is going to hold your hand. The Fashion Group has been a friend to anyone who has come into the industry who needed to know something — where to go, how to do it, what’s going on.”

When it was her turn, Marie Claire creative director Nina Garcia said, “to those pioneering women who founded the Fashion Group 85 years ago, I’m sure they are looking at us from above thinking ‘wow, good job, ladies.’”