Fashion Industry and Celebs Pitch in for Women In Need 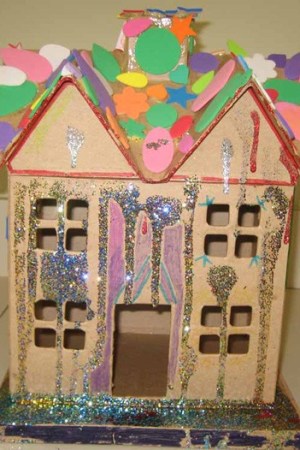 Women In Need has put a decorative touch on its fund-raising efforts.

The charity, which provides shelter for homeless families in New York City and services that help women get back on their feet, challenged about 30 designers, Hollywood and Broadway stars and VIPs to decorate papier-mâché houses — the kind that might go under a Christmas tree. It’s a colorful, spirited and in some cases heavily ornamented array that will be on auction Nov. 9 to 30 on Charitybuzz.com.

Josie Natori, a WIN board member for five years, said her house reflects her “East meets West aesthetic,” while Cameron Silver said his goal was to re-create the signature elements of his Decades boutique in Los Angeles, which are mixed metals, leopard and lights. “All of the metal bricks on the outside of the house were cut by hand, giving it an haute couture sensibility,” Silver said.

“My hope was to create a Kate Spade New York house that is infused with a sense of optimism, that will make people smile,” said Deborah Lloyd, co-president and creative director of Kate Spade NY. “Hopefully, it will help inspire others to do good things as well.”

Parsons The New School for Design collaborated on several of the designs, and some houses have been embellished courtesy of Crystallized Swarovski Elements.

Saks Fifth Avenue will feature the houses in its Fifth Avenue windows Nov. 5 to 9. The auction is scheduled to begin Nov. 9 at the Park Avenue Autumn restaurant on East 63rd Street. Myla Lerner, Larry Kramer, Deborah Roberts Roker, and Karin and Stephen I. Sadove are event hosts.

“New York City is my heart’s home,” Messing said. “In these terrible economic times, I hope that people who are lucky enough to have a roof over their heads and a meaningful support system will give what they can to those in need.”