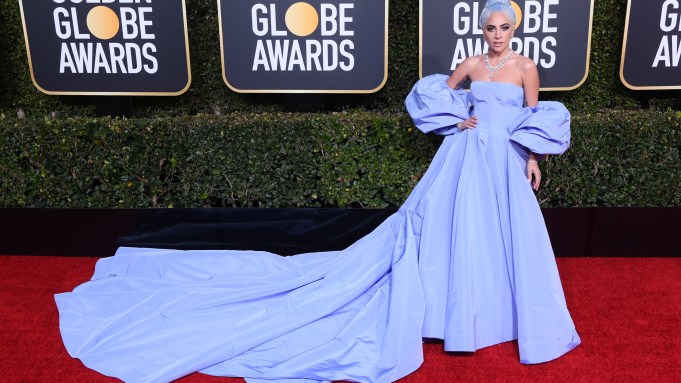 LOS ANGELES — When it came to red carpet looks at the 76th annual Golden Globes, the celebs seemed to be split between subtle political statements and a no-fuss approach after the lift of last year’s all-black dress code.

“Valentino wanted to dress me tonight and I said, ‘Yes.’ I feel very privileged,” said Laura Dern, in a fiery red gown before dashing down the carpet with her daughter.

The sentiment was the same for “BlacKkKlansman” star Laura Harrier, who wore Louis Vuitton. “This is the first and only dress that I tried on,” she said. “I put it on and loved it and here we are. It was very chill. I love the fit. I love how sparkly it is and I just feel pretty in it.”

Moments later Kieran Culkin, who was nominated for Supporting Actor in a Series, Miniseries or Motion Picture for TV, echoed that sentiment, noting of his Dior suit: “It was the first thing we tried on. Black on black on black. I just had to be talked into the bowtie to be honest.”

For those with a bit more to say, they spoke up with their fashion choices.

“I am wearing Off-White,” said Janet Mock of “Pose.” “I chose this gown because I wanted to wear white. I wanted to have a bit of a sports gown and support a black designer. I’m loving that I get to do that tonight.”

Following the all-white trend, castmate Dominique Jackson showed up in Marc Bouwer, saying, “I wanted to feel free. Being able to come to the Golden Globes as a trans woman of color from the Ballroom community…I just feel free in this dress. I wanted to show off a freedom, equality and a step in the right direction.”

Women’s rights also had an influence on the carpet. “Times Up Times Two is happening tonight,” said Jameela Jamil of “The Good Place.” “I’m wearing it on my bag. They’re hoping to double the amount of women at the helm of the industry here and around the world. The feeling of solidarity and men for women is really important tonight.”

Beyond clothing, the actors were also ready to ease their anxiety and celebrate.

“Alcohol. That’s how I’ll get through the rest of the evening,” Culkin said. “If I try to prepare a speech, it makes me nervous and I want to go home. So I’m not going to prepare one.”

For Harrier, things were more balanced. “I had a green juice to try to be healthy before the Champagne,” she said. “I’m just looking forward to supporting John David [Washington] and Adam [Driver] and Spike [Lee] and rooting them on. I’ll be that obnoxious loud one. I’ll be embarrassing them all.”

What to Watch: Arts, Culture and Parties in 2019