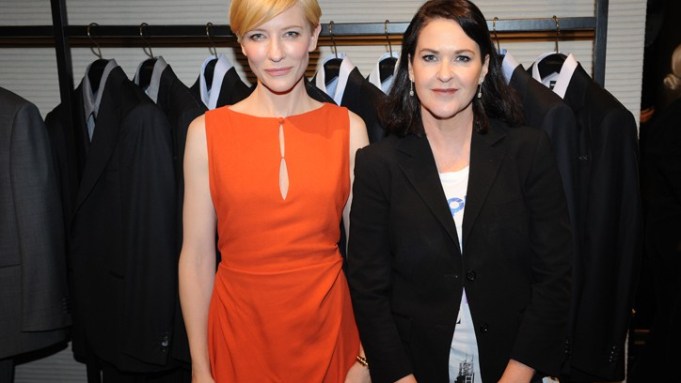 The Fashion’s Night Out frenzy spread to Asia over the latter part of last week and on through the weekend.

Australia kicked off the party Thursday night. This was the first time Sydney participated in the event, which attracted the likes of homegrown stars Cate Blanchett and Miranda Otto.

Sydney Lord Mayor Clover Moore and a swag of local designers and models opened the event on the steps of the MLC Centre. More than 450 boutiques, along with the David Jones and Myer department stores, took part with fashion shows and installations.

The Australian Chamber Orchestra played at Tiffany & Co., which installed a candy bar for the night.  Otto popped down for champagne at Burberry while Blanchett joined Olympic gold medalist Ian Thorpe at Giorgio Armani.

People came, in spite of the rain. “I was absolutely stunned how many people
were out – it was like a fete” said Vogue Australia editor Kirstie Clements, who is already planning next year’s event. “It’s that whole idea of the customer being part of the fashion experience. It’s loud and clear that that’s what they want.”

On Friday, the action moved to New Delhi, where  wannabe fashionistas mingled with Bollywood starlets. Held at Delhi’s marble and glass Emporio Mall, the event drew a crowd of several thousands.

Some of the night’s biggest attractions were limited edition t-shirts by designers Manish Arora and Rajesh Pratap Singh. They sold at 500 rupees, or $11, a pop.

“This is great”, said Rani Despande, a 30-year-old housewife of the event. “It shows that Indian designers are just as good as the others”.

Tokyo and Beijing wrapped up the festivities on Saturday night.

The action in Beijing was more low-key than many other spots around the world. Organizers said that 3,000 to 4,000 people turned up for the festivities at luxury China World Mall. The event appeared to target high-end consumers rather than the masses.

Chinese actors and models were on hand as several retailers in the mall complex offered discounts and other incentives to shoppers. There was also a Vogue concept store selling items from 15 luxury brands including Fendi, Gucci and Salvatore Ferragamo.

In Tokyo, hip hop dancer Kento Mori performed a tribute to Michael Jackson before Ai Tominaga, drag queen Ikko and a gaggle of Japanese models strutted down the middle of Omotesando Hills in a fashion show.

Hermès took advantage of the evening to open its first pop-up store in the Tokyo mall. The shop, decked out in the house’s signature orange boxes, sells nothing but the brand’s colorful silk scarves. Plenty of customers were picking through the offerings and many were taking advantage of a photo booth in the store to snap commemorative pictures with their friends.

Elsewhere, Tod’s opened the rooftop terrace of its flagship while Gucci photographed shoppers wearing fur coats from the fall collection. Marc by Marc Jacobs enlisted makeup artists to give customers mini makeovers. A group of stores, including United Arrows, hired a double-decker bus to ferry shoppers up and down Omotesando Avenue.

“The atmosphere is so much fun,” quipped Miki Fujita, a 27-year-old office worker, who bought a watch at the newly opened Michael Kors boutique on Omotesando Avenue. “It’s like a festival.”