A slew of designers and all 17 editors of Vogue worldwide turned out for the Japanese capital's debut FNO event.

By Amanda Kaiser and Kelly Wetherille on November 7, 2011
View Slideshow 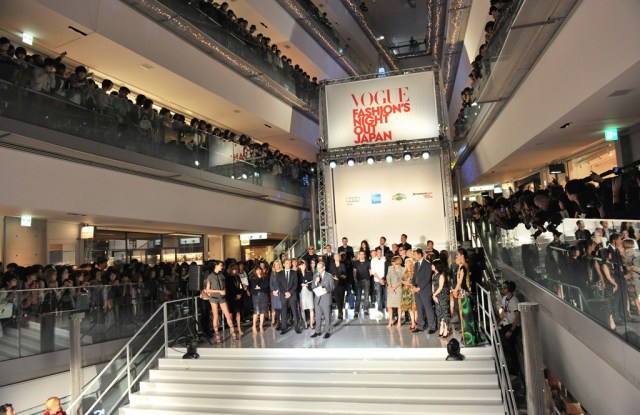 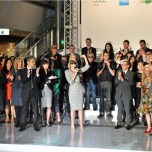 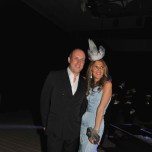 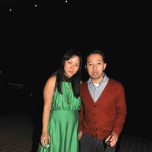 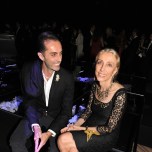 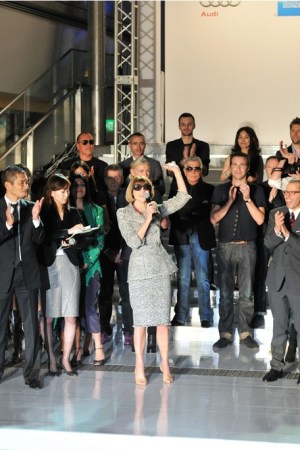 The opening ceremony for Fashion Night Out. 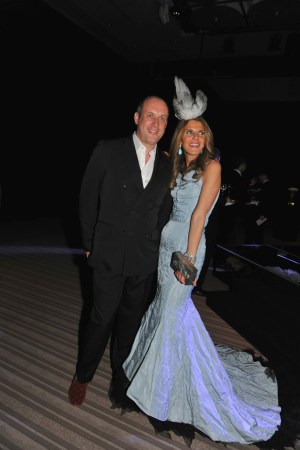 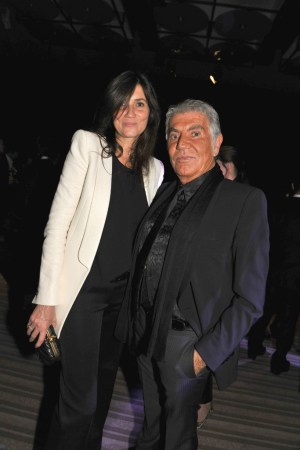 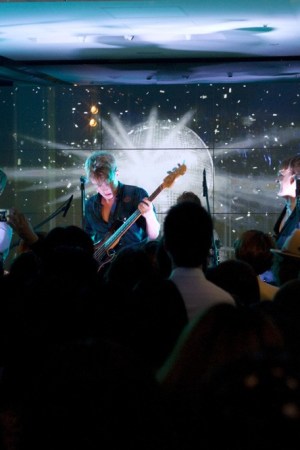 The Crookes playing at Burberry.

Hordes of passersby in the Omotesando and Aoyama shopping districts clustered outside each store Wintour entered. They strained their necks to try and catch a glimpse of her. They called out her name and even followed her down the street when she and her daughter, Bee Shaffer, decided to walk between stores they visited, which included Louis Vuitton, Tod’s, Burberry, Michael Kors, Rag & Bone and Marc Jacobs. In what was undoubtedly one of the key photo ops of the day, partygoers gathered to watch her pound rice cake paste with a giant wooden hammer at Theory.

The frenzy surrounding Wintour’s visit caught some observers off guard, given the Japanese people’s reputation for quiet reserve. “I’m surprised. I thought of all places, Japan would be slightly immune to that,” said Marcus Wainwright of Rag & Bone, just a few minutes after Wintour and Shaffer toured the brand’s quaint store in Omotesando as partygoers looked on as they sipped Asahi beer and ate cotton candy.

Wintour, speaking Friday on the eve of FNO after spending the morning signing autographs at Isetan with fellow Vogue editors Franca Sozzani, Emmanuelle Alt and Alexandra Shulman, expressed a desire to interact with as many people here as possible during her stay, her first visit to the country in 20 years.

“What I really enjoy is meeting the Japanese people. It’s very moving to see how much it means to them for all of us to be here.…It’s great that the designers are here but, you know, I see a lot of Michael and Rag & Bone in New York so really for me the most important thing is to meet as many of the Japanese customers as I possibly can,” she said.

Japan’s supersized FNO festivities kicked off Friday night with Vogue’s opening cocktail and gala dinner at the Grand Hyatt Tokyo. Wintour and Vogue’s international editors in chief started the evening by assembling for a rare “family portrait” shot by Frederic Aranda. The Vogue brigade then joined the party to mingle with a host of designers, fashion executives and other VIPs, all of whom made their entrance by descending a staircase and walking over a dramatic transparent platform covering scores of white lilies. Anna Dello Russo, editor at large for Vogue Japan, cut a dramatic figure in a floor-sweeping pale blue Nina Ricci gown and feathered hairpiece. Peter Copping, the house’s artistic director, accompanied her into the party by chance since they arrived at the same time. “There was quite a lot of stairs for her to maneuver, so I was there to help her. So it was almost like the service that comes with the dress,” Copping said with a laugh.

At dinner, Jonathan Newhouse, the chairman of Condé Nast International and the architect of the event, gave an emotional speech touching on the tragedy of the March 11 tsunami and the importance of the Japanese market to the fashion and luxury goods industries. He broke into song at one point, singing several bars of “Ue o Muite Aruko” — best known in the English-speaking world as “Sukiyaki” — a poignant song of love and loss.

“I thought, what if we could get all of the editors to come; that would make a very powerful statement,” Newhouse said on the sidelines of the event. “When there’s trouble, it’s not enough to send a sympathy card…in a way we’re the only ones that can do this,” he said.

Wintour, referencing the Newhouse family’s $1 million donation made immediately after the quake, also stressed the importance of coming together to support Japan.

“It’s not usual for 17 editors in chiefs of the different Vogues to be doing something like this, so I think it’s really a testament to Jonathan’s initiative and forward thinking and philanthropic endeavors that we’re all here,” she said.

During her time here, Wintour also took time to meet with Japanese designers, including Sacai’s Chitose Abe and a handful who show in Tokyo.

“I think there’s a real sense on a global basis that everybody does want to help and support Japan after everything that has happened here. I think out of adversity, a lot of creativity comes so I was very moved by the spirit and the fact that they were not producing clothes that were gloomy, that were dark. But it was much more reflective of optimism and positive thinking. [There was] a lot of color and interesting fabrics and textures,” she said.

While FNO was designed to boost store traffic and sales, some visitors expressed a certain level of surprise at the state of retail — even before the event took place on Saturday. “I’ve found it much more alive than what I had thought. I went to the store. I have seen that people are shopping, are doing things.…I see a lot of movement,” said Sozzani, editor in chief of Vogue Italia.

“Everybody told me that the vibe has changed for the positive in the last few months,” he said.

Alt, editor in chief of Vogue Paris, said her nighttime arrival in the city seemed a bit dimmer than she had remembered it from her last visit eight years ago, but she was no less impressed with Tokyo’s vibe.

The weekend was chock-full of activities in all the major shopping areas of Tokyo. Here’s a recap of some of the highlights from Saturday:

• Jennifer Hudson, Kors and Wintour signed tote bags at Kors’ packed store on Omotesando Avenue. Later Saturday night, Hudson belted out a short set including “And I Am Telling You I’m Not Going” at a Kors party held at the U.S. ambassador’s residence.

• For the second time in a week, Cavalli mingled with fans at his newly opened Aoyama boutique, before heading straight to the airport and concluding his first official visit to Japan.

• At Burberry, British band The Crookes played two sets for an excited group of assembled customers, and creative director Bailey chatted and posed for photos with fans and even signed the linings of a few trenchcoats. “The enthusiasm and the passion is so inspiring here, you know, and sometimes I wish we had a bit more of that in Europe,” he said. “[The Japanese] actually enjoy fashion and they enjoy an event, and they’re so appreciative of everything that it’s actually a real thrill to be a part of it. The energy is unbelievable.”

• In its small Omotesando boutique, Hermès employed models to carry out demos on the versatility of scarves.

• Kevin Carrigan, global creative director of ck Calvin Klein, spent the evening with the company’s president and chief executive officer, Tom Murry, at the brand’s pop-up store, which was opened exclusively for Fashion’s Night Out. For the occasion, Carrigan designed a line of nature-inspired, exclusive holiday products. The pop-up was also selling Christmas ornaments, with proceeds going to the Japanese Red Cross’ earthquake relief efforts. Carrigan said he was the first Calvin Klein executive to visit Japan after the earthquake, arriving in Tokyo just three weeks after the devastating event. “You really, really felt the sadness, but yet…they’re so resilient, the Japanese, and [they have] so much courage,” he said.

• Thom Browne mingled with customers at 10 Corso Como, which was selling a series of plaid shirts Browne designed in conjunction with Rei Kawakubo. “Doing anything with Rei is an honor. She is an icon,” he said.

• Van Assche, Newhouse, Alt, Nicola Formichetti, Tominaga and Vogue Turkey editor in chief Seda Domanic made an appearance at a private party on the fourth floor of the Dior store, where the group signed and raffled off three T-shirts for charity. “Japan has always been really kind to me, to my label, to Dior Homme…and it’s only natural that I would be here,” Van Assche said in a short speech at the event. “Japan has done so much for fashion, it’s payback time. Fashion should do something for Japan.” Alt said: Everybody’s smiling and it’s great. I wish I could speak Japanese to understand every comment.”

• Loewe’s Stuart Vevers, who was DJing in the brand’s store on Omotesando Avenue, takes a prize for embarking on long-distance air travel to be a part of FNO. Just last week, he was in Japan for an event before flying to Madrid for five days and then returning to Tokyo. “You can’t keep me away from here too long,” he said.