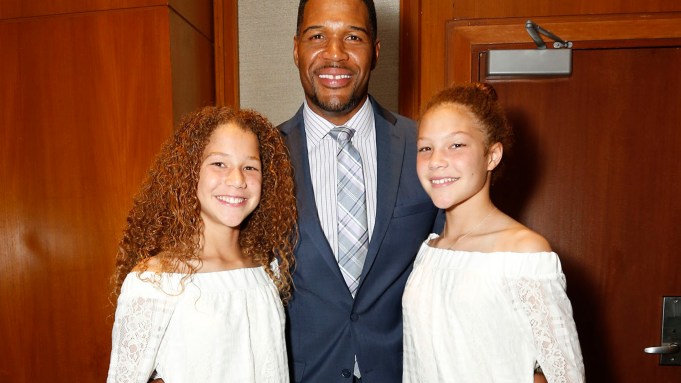 NEW YORK — A tie, a golf game, a fancy steak dinner? With Father’s Day this Sunday, the holiday is front-and-center on everyone’s minds. So it was a fitting backdrop for the 76th annual Father of the Year Awards held Thursday at the New York Hilton Hotel.

The event was a family affair for Ellison, whose father, wife Sharyn, daughter Gabrielle and other family members joined him. His son Donavan, however, was stuck in school in Dallas.

“He lobbied hard to come — he was still lobbying up until last night,” Ellison said. “He even bought a suit to wear — it was a JF [a Penney’s label], he’s the perfect JF model. But it’s his first week and in college, missing a day is like missing a week.”

For Ellison, getting an education is the key to getting ahead. The middle child of seven kids, he was born to sharecropper parents in Tennessee who taught him that education could provide an escape from poverty. He took that to heart and it has led him to the top ranks of retailing.

Even so, Ellison said that, “Anyone who knows me, knows my family is second only to my faith. I believe in balance and I don’t miss any key family events.” He said he sits down at the beginning of the year and blocks off every parent-teacher conference, band performance or other events important to his kids on his calendar.

He is similarly respectful to his wife. He related a story of being invited to the White House for a trade advisory committee meeting on Feb. 15, and his daughter reminded him that he would need to leave on Valentine’s Day. He said he was planning to take her mom for a nice lunch before flying out. “Not good enough,” Gabrielle told him. “Mom enjoys your Valentine’s Day dinners. You have to do better.” His initial reaction was one of disbelief that a child would tell her father what to do. “I’ll show her,” he said. “Sharyn, pack your bags, you’re coming with me to D.C.”

Ellison said that when it comes to children, they spell love with these four letters: T-I-M-E.

Strahan agreed, telling about how his father took him to the gym when he was a kid and worked with him on improving his fitness. “I grew up chunky — big-boned,” he said. “My brothers called me Bob, for Booty on Back. True story, and it still hurts.”

But those gym sessions led to an NFL career and he credits his dad for getting him started on that path.

Strahan was joined at the event by his twin daughters Sophia and Isabella. “They’re fraternal twins and they’re 12 and they’re tall,” he said. His older children, a son, 22 and a daughter, 25, were working and unable to attend.

Strahan said the best thing a father can do is “be present.” Don’t be afraid to hug and kiss them privately and publicly — “Embarrass the hell out of them,” he said — and show and tell them they are loved.

In fact, he said he’s going to do just that by taking his Father of the Year trophy to Houston tomorrow and present it to his own dad.

One of the stars of the lunch was Brett Aurin, whose essay about his dad was chosen by Esquire magazine and the Sani Family Foundation as the 2017 winner of their All-Star Dad contest.

Brett credited his dad with being endlessly patient with his twin brother Kyle who has autism, spending countless hours working with him on geometry and other subjects. And although his dad’s cancer treatment last year kept the family from taking their annual vacation, they were heading straight to Disney World after the event to make up for it.

Gary Aurin said coming to New York for the lunch meant the boys had to miss a few days of school, but they both worked harder than ever to make sure they didn’t fall behind. “They bring out the best in me,” he said, giving a shout-out to his own dad who was “always calm and measured” despite the “herculean effort” of raising him and his two siblings who have cerebral palsy.

The event benefited Save the Children’s U.S. Programs and its Action Network. It raised $1.1 million for the cause and another $28,000 for the group’s Summer Boost initiative.