Gwen Stefani, Fergie and Shirley Manson were all seated around the guest of honor. 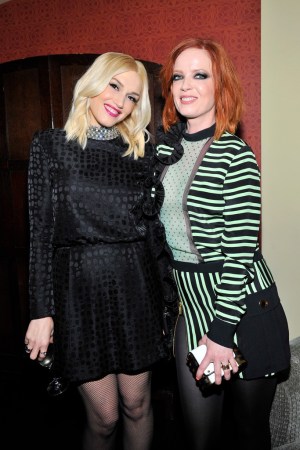 Uberstylists Arianne Phillips and B. Åkerlund aren’t ones to slap their names on just any old party invite. But both were more than happy to host a dinner, along with Barneys New York senior fashion director Tomoko Ogura, to honor Emanuel Ungaro creative director Fausto Puglisi on Thursday night.

For once, Chateau Marmont’s Bungalow One wasn’t full of actresses, but fashion-loving musicians. Gwen Stefani, Fergie and Shirley Manson were all seated around the guest of honor, with models Liberty Ross, Angela Lindvall, Alessandra Ambrosio and Heidi Klum sprinkled around the long table for good measure. Stefani even brought along her baby son Apollo, explaining that she was still nursing (he slept in his nanny’s arms in the living room while the grown-ups enjoyed dinner in the sun room).

“If it wasn’t for designers like Fausto, I wouldn’t be where I am today. It’s his intelligence, fun and aesthetic that help my work,” said Phillips, who just scored a Tony nomination for her “Hedwig and the Angry Inch” costumes. “I met Fausto because he sent me a fax in the Nineties, back when faxes came out on a roll of paper,” she continued. “He told me he really admired my work and that Madonna’s style had been a big influence on him.”

“That’s right, I sent her a fax from Sicily,” said the designer. “My English wasn’t great.”

Phillips ended up using some of Puglisi’s pieces for Madonna’s “Music” album tour, and they’ve been friends ever since.

It was a similar case of kismet with Åkerlund, whom he befriended during a stint in Los Angeles in the Nineties. “B. and I would hang out at her house, where she would be in her pajamas, giving me advice.”

Said Åkerlund, “What I love about Fausto is that he’s bold. I don’t think less is more. I think more is more.”

Case in point was the ruffled and dotted fall Ungaro frock she selected for Manson. “I can’t take credit for this, it’s all B.,” said the singer. “I don’t normally come to things like this because I’m a crabby bastard,” she laughed.

After making a toast, Ogura shared, “Fausto told me that he came to Barneys in New York when he was 17 with five dresses, hoping that someone would buy them. Nevermind that he came to the store, not the offices where the buyers were, I thought that was touching. Now we’ve come full circle.”