Washington’s boys’ club took another hit at the dinner hosted by Elle and Gucci to honor the magazine’s salute to its pick of the capital’s top 10 power women. 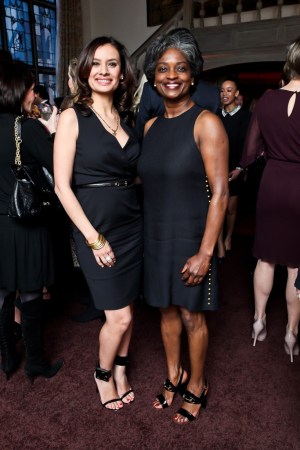 Washington’s boys’ club took another hit Wednesday at the Italian Embassy dinner hosted by Elle and Gucci to honor the magazine’s salute to its pick of the capital’s top 10 women of power — no easy gig in a city where political muscle sometimes resides with those who cancel at the last minute. Missing in action at the events ceremony was NBC’s Andrea Mitchell, who was making headlines of her own traveling with President Barack Obama on his first presidential trip to Israel. “Andrea will be interviewing the king of Jordan next week,” NBC News correspondent Luke Russert, on Mitchell’s guest list for the party, confided to a friend.

Jake Tapper, who left ABC to anchor his own weekday news show for CNN, was also there. Just two days after launching his first appearance on “The Lead with Jake Tapper,” the Emmy Award-winning correspondent looked out onto a sea of tall blondes, stiletto heels and beautiful women dressed in black. Then he balked. “Oh God, here we go,” he moaned, hanging back before finally taking a step into the crowd. So how do you coax a workaholic husband into a high-fashion social swim? “I rubbed his back and said, ‘Take a deep breath. You’ll be fine,’” said his wife, Jennifer Marie, as she reached out to give his back an extra rub.

Mitchell was the only one on Elle’s A-list, started back in October, not to make the party. Top billing went to Jill Biden, who charmed the fashion set in a black-and-white cocktail dress with a low-cut back. Biden insisted she had no idea who deigned her dress. “I buy all my clothes myself,” she said. “I think I got this at Neiman Marcus.”

For the Elle crowd, the scene at the ambassador’s residence was a bucolic antidote to New York’s urban vibe. “When we drove up, a fox ran across the driveway,” said Bella Slagsvol, Elle’s special events associate, who, hailing from Charleston, S.C., added, “I know a fox when I see one.”