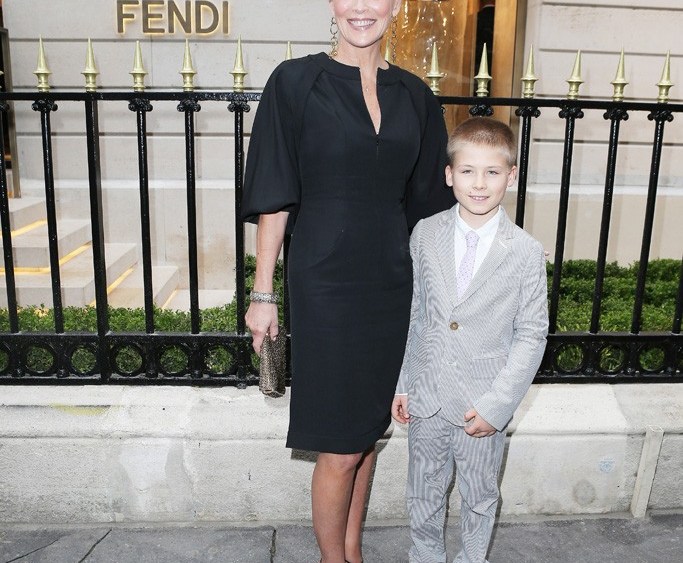 WHEN IN ROME: Fendi brought touches of Rome to Paris on Wednesday night, installing fountains amidst the tropical greenery in the courtyard of the Petit Palais and serving a sumptuous, summery dinner under the frescoed ceiling of its peristyle.

The weather, however, was more Scottish than Italian, as a cool breeze and a smattering of rain whipped through the party. Fluffy white fabric throws were passed out to the likes of Clotilde Courau and Dolores Chaplin.

“It’s like a mink,” Chaplin said as she arranged the fabric across her bare shoulders like a fur stole. (Actually, it bore the label Zara Home — the price tag still dangling.)

Chaplin just wrapped a Xavier Beauvois comedy about the 1978 theft of the coffin of her grandfather, Charlie Chaplin. The character she plays was hardly a stretch. “I’m a Chaplin. I play my aunt Geraldine,” she said.

Before sitting down at a table hosted by Karl Lagerfeld and luxury titan Bernard Arnault, Sharon Stone enthused about a few glorious months she spent in the Eternal City while filming a John Frankenheimer movie.

“I rented an apartment across from the Coliseum. I liked that it had an Etruscan foot for a doorstop,” she marveled. “In those days you could walk right in and sit in the Coliseum.”

Stone even played tour guide once: “Dick Cavett came to town and there was no one to pick him up at the airport so I said, ‘I’ll do that.’”

French singer Soko said she’s in Paris between gigs in Poland and Austria and brought along gear to finish up her second album. She held out fingernails decorated with smiley faces. “I was going to put aliens on them, but I thought it might look weird,” she deadpanned.

“I’ve just come back from the circus, would you believe,” said Chiara Mastroianni, who appears in Fendi’s latest fragrance ad campaign. She explained she plays a circus manager in the Chaplin-themed Beauvois movie, titled “La Rançon de la Gloire,” (The Price of Fame, in English).

“This is my fourth outfit change today,” confided Czech model Petra Nemcova, who was also spotted at the Elie Saab show earlier in the day. “It’s all part of the job.”

Other guests at the boutique cocktail, which spilled out onto the pavement, included Naomie Harris, Valérie Donzelli, Delfina Delettrez Fendi and Melissa George.