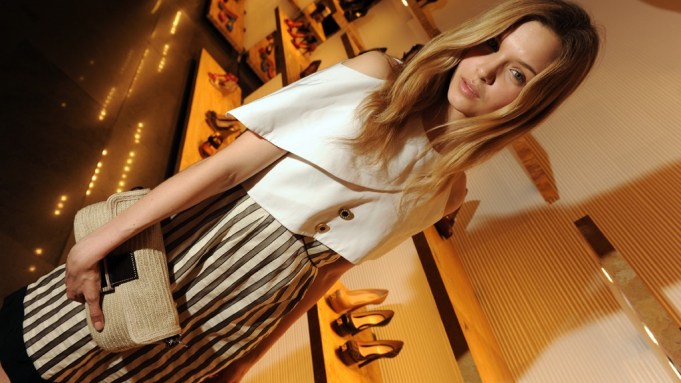 Fendi celebrated the 15-year anniversary of its iconic Baguette bag on Tuesday evening with a cocktail party at its Fifth Avenue flagship in Manhattan, where coffee-table books displaying the varying styles of the bag over the years lay open on most surfaces. Constance Jablonski, Hilary Rhoda, Byrdie Bell and Annabelle Dexter-Jones all turned out for the fete in the label’s ready-to-wear: some beaded, some polka dotted, some vaguely pajamalike.

“It’s very comfortable,” Dexter-Jones said, looking every bit the gamine in an oversize dotted top and short shorts, while Bell wore a floor-scraping, sky-blue beaded gown. A videographer hired by the brand literally shot from the hip, zooming in on partygoers’ accessories.

“Is that a Baguette?” he asked one, who responded in the negative.

Hannah Bronfman, also kitted out in Fendi (“and jeans. It’s too cold for the shorts this goes with.”), had been tapped to DJ the party. The entrepreneur had encountered a variety of obstacles to get there. “My computer was stolen from my apartment the other day,” Bronfman explained, “and that was a nightmare, but luckily Brendan [Fallis] left his computer behind, so I’m using some of his music for the mixes. He lost his passport and is stuck in Bratislava [Slovakia], so that’s a whole other story.” But was Bronfman carrying the bag of the hour?

“I had to bring my computer, so I’m using this,” Bronfman revealed a large camel-colored Fendi piece hidden behind the decks.

“You know, maybe I should just get them to pay me in Baguettes,” Bronfman laughed.