The Roman house also hosted a dinner for the likes of Laetitia Casta, Louis Garrel, and Lou Doillon. 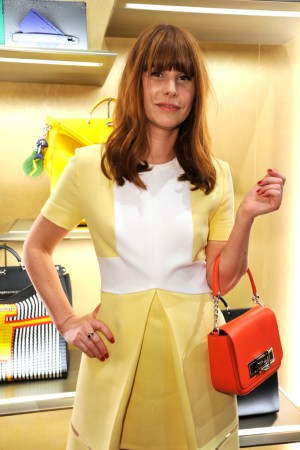 The Roman house joins a strip of luxury men’s labels that are new to the Marais district, including Moncler, Gucci and Givenchy.

“It’s a creative neighborhood, and young people like to shop in the area,” Venturini Fendi enthused.

Her designing daughter Delfina Delettrez toted the tiniest Peekaboo bag imaginable, too small even for her iPhone, which she clutched separately. What does she put in the charm-sized accessory? “Nothing,” she laughed, chatting about her forthcoming relocation to London and plans to steer her jewelry designs in a more classic direction, meaning no more single statement earrings. “I’m going back to pairs,” she said.

De Givry, who played opposite Greta Gerwig in “Eden” last year, said he’s eying roles in English-language movies, and brushing up on his parlance. “I would like to have a British accent,” he mused, also citing a fondness for movies by the Coen brothers and Noah Baumbach. “There’s a new wave of independent filmmakers in America that’s really interesting,” he said.