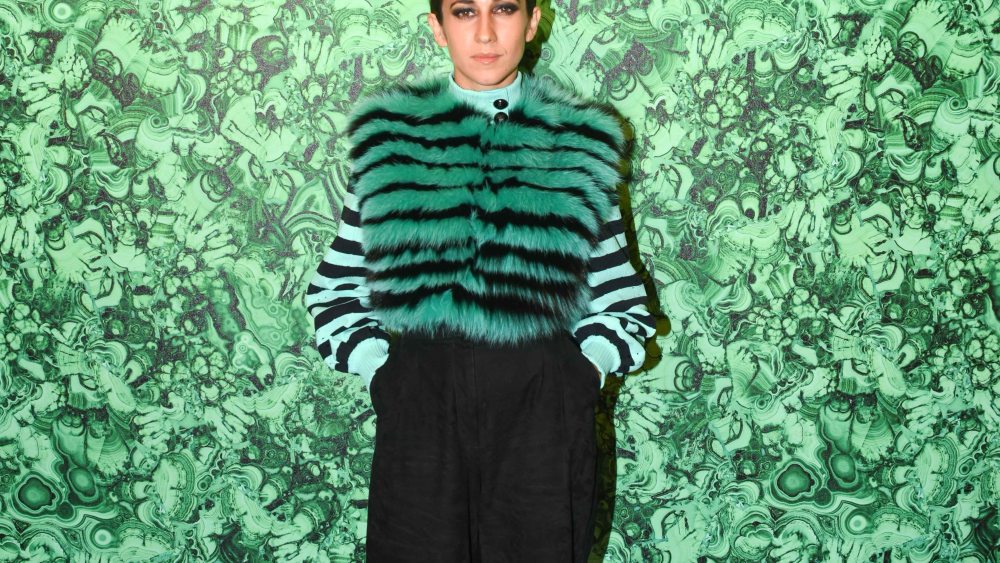 Making a rare New York City visit, Delfina Delettrez hosted a cocktail at Fendi Tuesday night to introduce the new Policromia watch. It was the first time the designer, who arrived with boyfriend artist Nico Vascellari en tow and wearing a Kelly green and black stripe fur and knit bomber jacket and suede pants by Fendi, has designed a watch. It also marks the first big watch introduction for the brand since launching Crazy Carats in 2010.

The designer said nature and the fabled Fendi Palazzo in the Eur district of Rome influenced the design. The watch, which will come in 20 different color combos, was  like  “playing with primary colors.”  Using lapis, malachite, tiger eye and white jade for instance,  she created “mini universes” on the watch representing the sky, the forest, sand dunes and animals. The watch is comprised of multiple “rings” in the different gemstones as well as white and yellow gold. It is then divided unevenly into several quadrants often marked with diamond pavè which comprise the dial markings something Delettrez refers to as “purposeful disorder – messed up but yet with an order.”

Approaching watch design held a few surprises for the designer who said she approached it as jewelry so much to the point that she was shocked when they showed her the dial. Also “the dimensions were distorted a bit, I imagined it to be bigger than it was.” She quickly adapted, noting the need to respect “balance and weight.” She also admitted to being a converted watch wearer having never worn one before the new Policromia which translates to “multiple colors.” Delettrez immediately thought of a goddess when she heard the name and feels the watch is a “female representation of the Greek god Chronos.”

To mark the launch, Delettrez collaborated on a film with Daniel Sannewald whom she has worked with in the past on two of her jewelry presentation videos. The video references art deco and futurism and features the watch floating throughout a graphic version of the famed Fendi palazzo flanked by two massive sized reliefs of Delettrez’s face as a Greco-Roman statue.

Guests such as Cristina Caradona of Trop Rouge, Jessica Joffe and a pregnant Leigh Lezark, as well as top clients and editors perused the resort offerings along with the watch. Inevitably conversations led back to last week’s election results of which many guests still expressed disbelief. Delettrez said she reacted by crying when she heard the news. “I couldn’t believe it, only Michael Moore predicted this. It’s a weird weird moment. It’s a Berlusconi moment.”