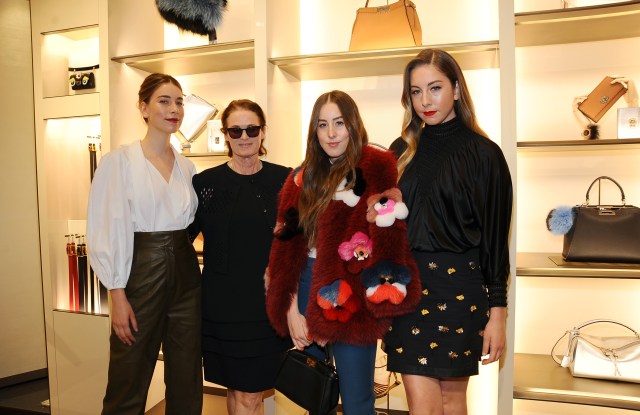 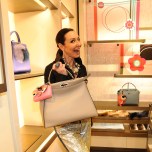 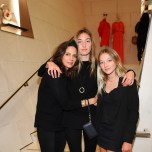 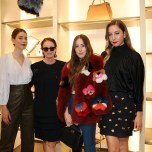 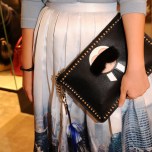 But the main attraction — and certainly the women making the most noise — was sister band Haim, who were manning the turntables upstairs. With an assist from pal Rashida Jones, Alana, Danielle and Este took turns chatting with WWD in the store’s luxe mirrored dressing room.

WWD: What have you been up to since we saw you during Grammy Week?
Alana: Working on our second record.
Danielle: We’ve been in studio every day for the last couple of months. It’s going to be an elevated version of our first album. [The music outside momentarily stops.] Oh, no. I leave Este alone for one minute and [both sisters chime in] that’s what happens.

WWD: What are your plans for the upcoming festival season?
Alana: We are doing a lot of summer festivals: Bonaroo, Governor’s Ball and Lollapalooza.
Danielle: We redid our whole show so there’s going to be lots of new things.

WWD: Such as?
Alana: What we are trying to do is go out there and prove that girls can f–king rock. That’s our goal for summer festival season. We are trying to inspire girls, get them to pick up guitars, and do our thing and rock out.

WWD: What are your DJing tricks?
Danielle: Even though we don’t have a microphone, we are singing along to every song we play. It’s kind of embarrassing sometimes.
Alana: We actually have no idea how to DJ. We play songs we grew up listening to and we want people to have a good time. That’s our goal tonight — to inspire a dance party.
Danielle: Este is killing it right now.
Alana: I think Rashida is with her. That’s why Michael Jackson is playing right now.

WWD: What was getting dressed for this party in the store like?
Este [who swapped places with Alana]: It was maybe the best day of my life. I was like, “I like this, can I wear it?” and they were like, “Sure.” That never happens. It’s a very strange thing for me still to be given clothing that’s magical and beautiful to wear. You can take the girl out of The Valley but you can’t take The Valley out of the girl.

WWD: What’s your songwriting process like?
Este: We sit in a room with a guitar. It’s very organic. The best way to describe it is one of us has the ball to begin with and we toss it to each other and go, “What you think about this?” It’s a very democratic situation. I feel like I get so emotional, to quote Whitney Houston. [My sisters] have to take me back when I get overdramatic.

WWD: How do you end your DJ sets?
Danielle: This [Lionel Richie’s “All Night Long”] is kind of our go-to ending, but it’s also a pinnacle when the party is just getting started and you let the audience know we are not stopping here. I like to end DJ sets with [Tupac Shakur’s] “California Love,” Everyone in the room feels a nice sense of camaraderie when that comes on.
Este: The great part about being a DJ is you get to be Lionel Richie for a song, or David Bowie, or Robyn, and you get to perform it. I think everyone grew up singing songs in the mirror and that’s what we are doing up there, except without the mirror.