Kate Hudson and Bella Thorne were among the guests that dined on a terrace on the Pincio Hill overlooking Rome. 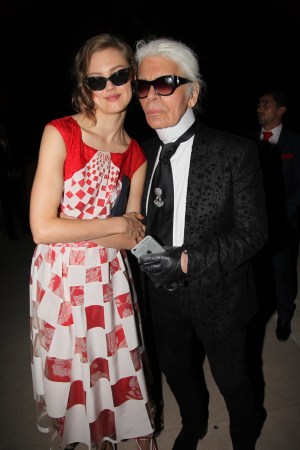 ROME — “That was not bad, but what the hell will we do for the 100th anniversary?” Karl Lagerfeld said to Pietro Beccari, Fendi’s chairman and chief executive officer, after a 90th anniversary runway blowout  at the Trevi Fountain on Thursday evening.

The executive recounted the anecdote to around 500 guests, triggering a round of laughter and applause, at a dinner held on a Pincio Hill terrace. After the models paraded the elaborate couture furs on a Plexiglass runway placed atop the Trevi’s pool, Fendi reprised the aquatic theme by re-creating a series of dancing fountains strategically lit around the long tables offering spectacular views over St. Peter’s Basilica and the city of Rome.

Beccari admitted the task of organizing a show at the Trevi monument was no easy feat, given the red tape formalities. “We received the final approval yesterday at one o’clock,” he revealed, to a collective gasp from the crowd.

Several members of the Fendi family attended the event, including Carla Fendi, one of the five sisters that developed the brand before it was acquired by LVMH Moët Hennessy Louis Vuitton. “My heart was racing,” she said.

Her sister Anna, who is the mother of Silvia Venturini Fendi, said she was overjoyed to witness the Roman showing. “It’s such a great satisfaction to see the Fendi brand kept alive from such capable and extraordinary people. They will make this name eternal,” she said, flanked by her daughter Ilaria, granddaughter Anna, dubbed Nina, and Delfina Delettrez Fendi.

Kate Hudson, wearing an azure goddess gown in theme with the evening, enthused about the “fantastic” show and Silvia Venturini Fendi, whom she “met a long time ago, I was 19 and not famous. She is a warm, embracing person and was so lovely to me. You don’t forget people who connect with you for no reason.”

Hudson remembered the Baguette as one of the leitmotifs of the “Sex and the City” show and how she “saved up” and bought her first Baguette. “I still have it from maybe 15 years ago. I have three and they still look brand new. They are timeless.” Hudson will start promoting “Deepwater Horizon,” directed by Peter Berg. It’s based on the biggest oil spill in U.S. history in the Gulf of Mexico in 2010, and coming out in September.

Maria Grazia Chiuri and Pierpaolo Piccioli, who worked at Fendi for years before joining Valentino, showed their ongoing support for the company and the Fendi family. Hours after the official confirmation that Chiuri was leaving Valentino and Piccioli was to become sole creative director of Valentino, the designers were all smiles, walking in together and gamely posing for photos. Ahead of the announcement that she was to be appointed Dior’s couturier, Chiuri was careful not to confirm the news, but referred to new professional challenges potentially being ” a little bit like traveling. If you want to go to [Peru’s] Machu Picchu, you need to be fit, have the right age and energy. If you don’t do it then, when?”

Piccioli was clearly relishing the opportunity to further prove his design chops at Valentino. “It’s like a family for me,” he said of the company’s team and seamstresses. “I’m a romantic, people are the ones that make the companies.”

In a playful banter with Chiuri and Piccioli and guests commenting on the duo parting ways, Vogue Italia editor in chief Franca Sozzani said: “You always hear of husband-and-wife splits: Why can’t working partners also each go their own way and develop their potential?”

Lottie Moss said she always felt “confident” wearing Fendi. “Their clothes really fit me, they are young and fresh,” she said, wearing a short all-white dress.

U.S.-born Korean actress Leslie Kim, whose stage name is Han Ye-seul and whose fame in Korea was suggested by the number of fans asking for selfies and trailing photographers and TV cameras, said it was her first Fendi show. “Fendi is a huge trend in Korea — fur is really big,” she said. She is to appear in a romantic TV show.

Hudson introduced music composer and producer Giorgio Moroder after a risotto and gilthead bream dinner and the dancing began, followed by an after party at the new Raspoutine Club.