Designer Johnson Hartig’s hyper-embellished, art-to-wear aesthetic drawing from a million inspiration points, from regal to L.A. skate and street, coalesced into the most coherent, elevated collection he’s ever shown.

Malin Åkerman, Johnson Hartig and Fergie at the Libertine fall 2019 after party in L.A.

Marilyn Manson came dressed in a coat sparkling with the words “Neat, Neat, Neat,” and made nice in the front row with ex-wife, burlesque queen Dita Von Teese. Fergie dazzled in rainbow-beaded pants and gushed afterward, “It was fabulous!” And Adam Lambert sparkled like a rock god in green eyeshadow to match his green Libertine bomber jacket.

A cross-section of L.A.’s art, rock-‘n’-roll and O.G. fashion tribes came out Friday night to the Wilshire Ebell Theatre to support one of their native sons, Libertine’s Johnson Hartig, the latest designer to host a runway show in the city after Rodarte’s in February. There was florist-to-the-stars Eric Buterbaugh, who remembers Hartig working as a delivery boy for him; and Katherine Ross, who tapped him to design one of her Wear LACMA collections to benefit the museum where her husband Michael Govan is the director. Buyers from Neiman Marcus and Maxfield were in the house, as well as Hollywood stylists Tara Swennen, Alexandra Mandelkorn and Tanya Gill, and models-turned-actresses Jaime King and Sofia Boutella. 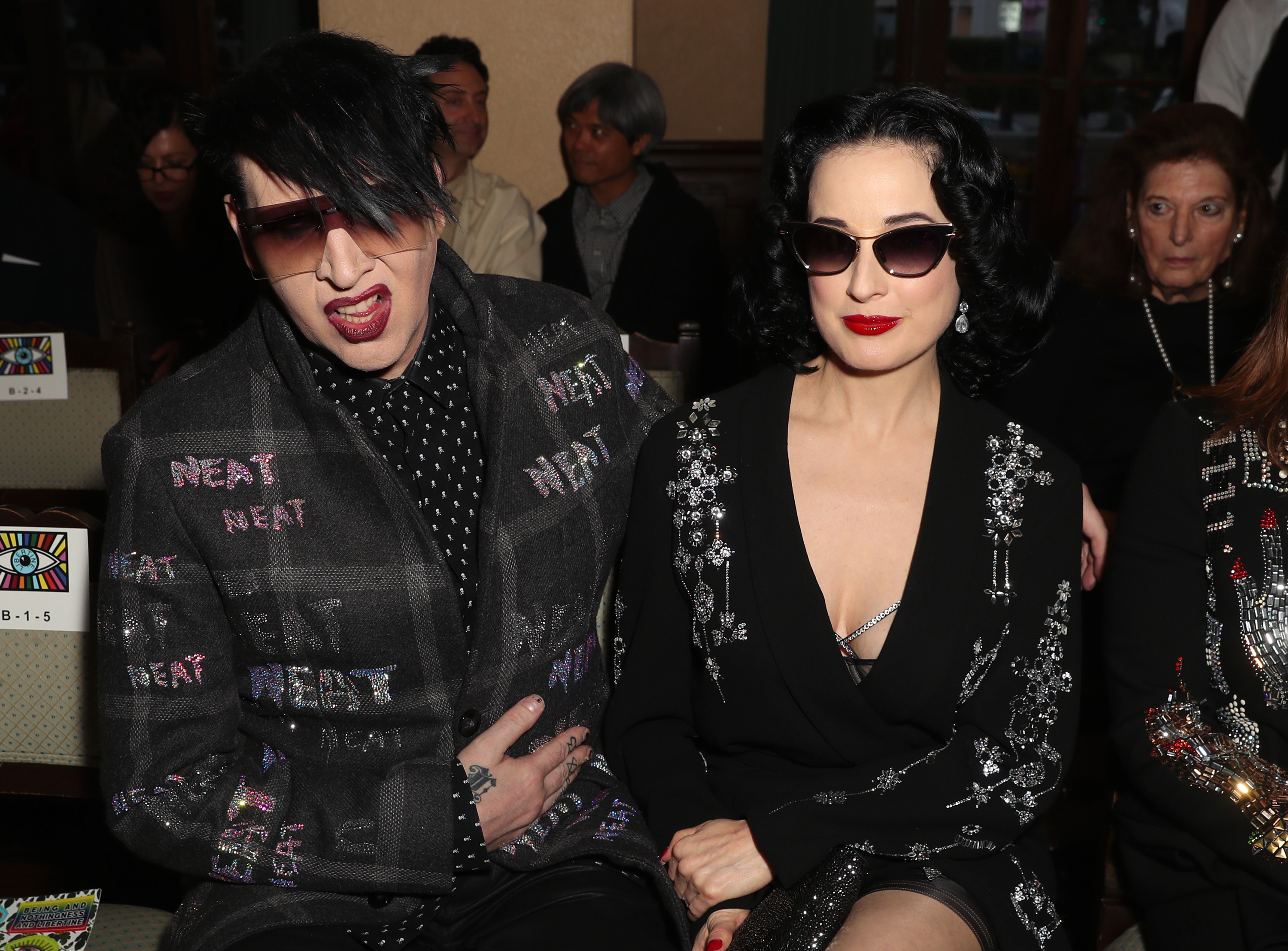 On the runway, the collection revealed itself like rooms of a curio shop, with Hartig’s signature hyper-embellished, patchwork-embroidered, art-to-wear aesthetic drawing from a million inspiration points, from regal to L.A. skate and street, somehow coalescing into the most coherent, elevated collection he’s ever shown. 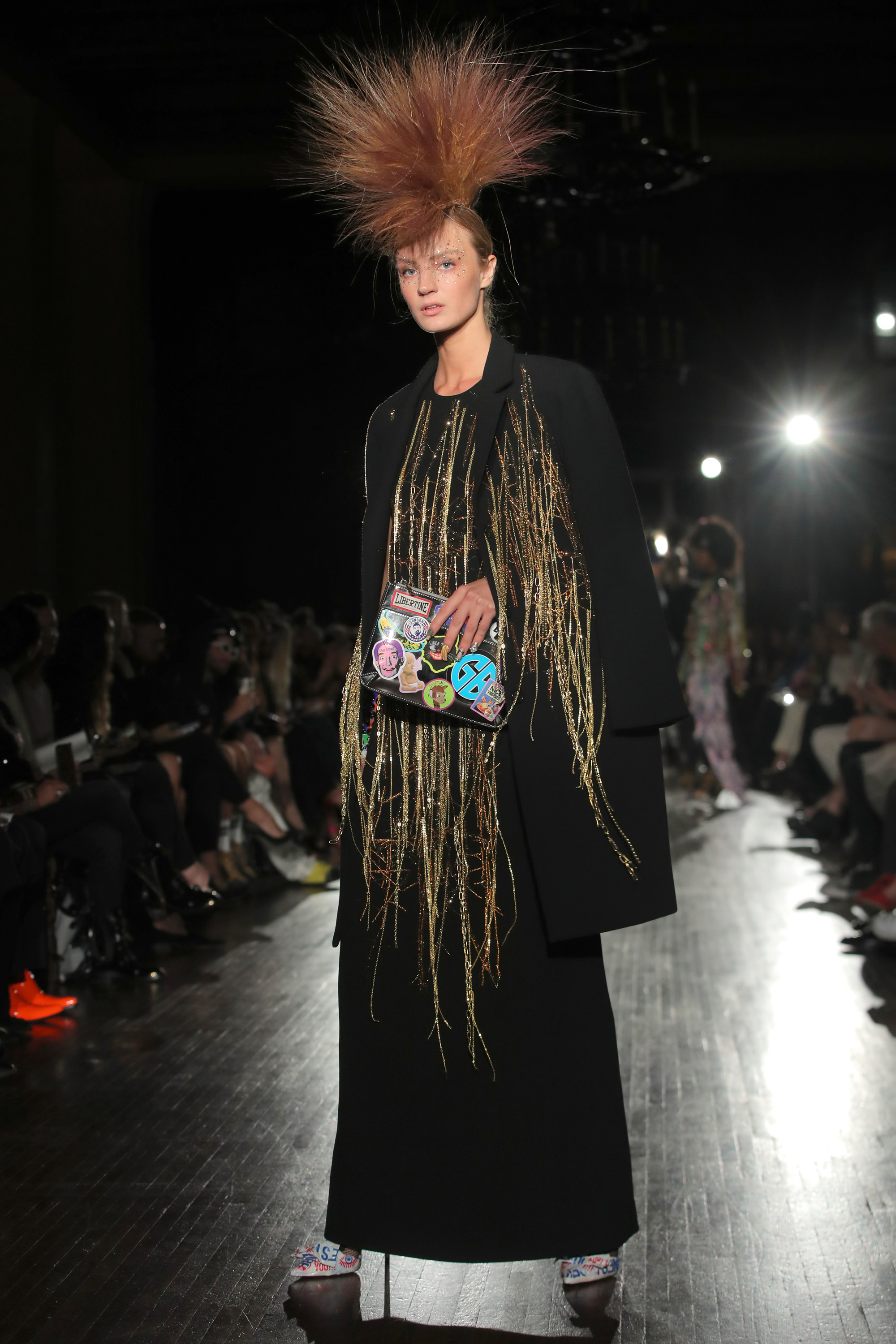 “Ottoman empire, 19th-century Chinese children’s hats, Flemish paintings…Vanitas paintings. And the beadwork was everything from Victorian pillows to Aubusson carpets,” said Hartig, listing the latest antiques and interiors obsessions that fed his fall coed collection. “I’m inspired by 100 things a day and I just go for them. I’m able to throw these disparate things together and in the end, it seems a lot more conscious than it was.”

While it might be tempting to compare his over-the-top aesthetic to Gucci’s Alessandro Michele, remember that Hartig launched Libertine in 2001, and he has been tapping into L.A.’s wonderfully weird melting pot of high and low for nearly two decades, starting out by reworking vintage, but now producing nearly 80 percent of his collection new, albeit with vintage touches. 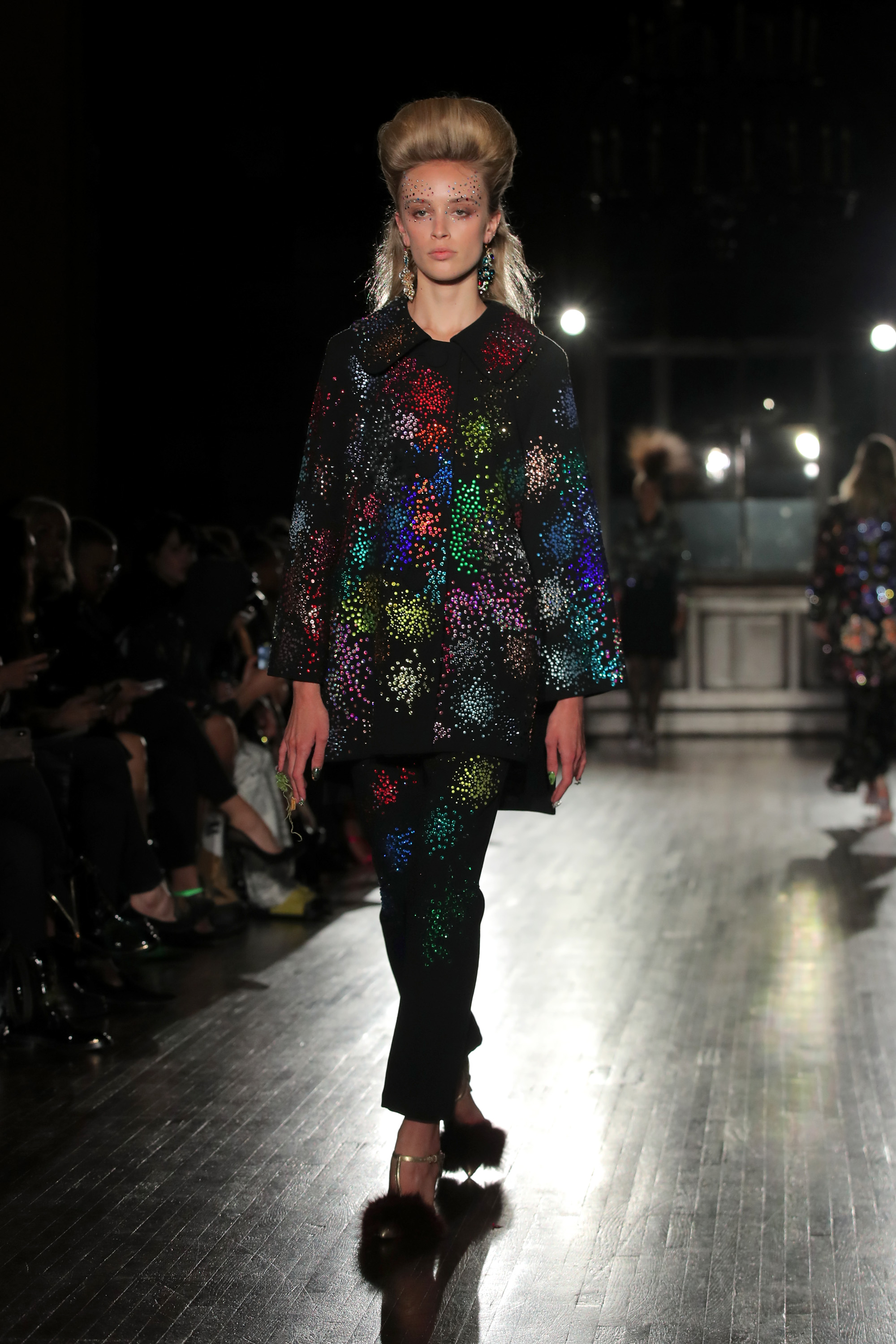 For fall, he made a strong case for unique tailoring, showing embellished coats and pantsuits for men and women — covered with bursts of rainbow beading; shimmy-ing with gold chain fringe, or shimmering from red to blue lamé with subtle handwritten song lyrics as part of a Jimi Hendrix collaboration that was way beyond the clichéd licensed T-shirt. 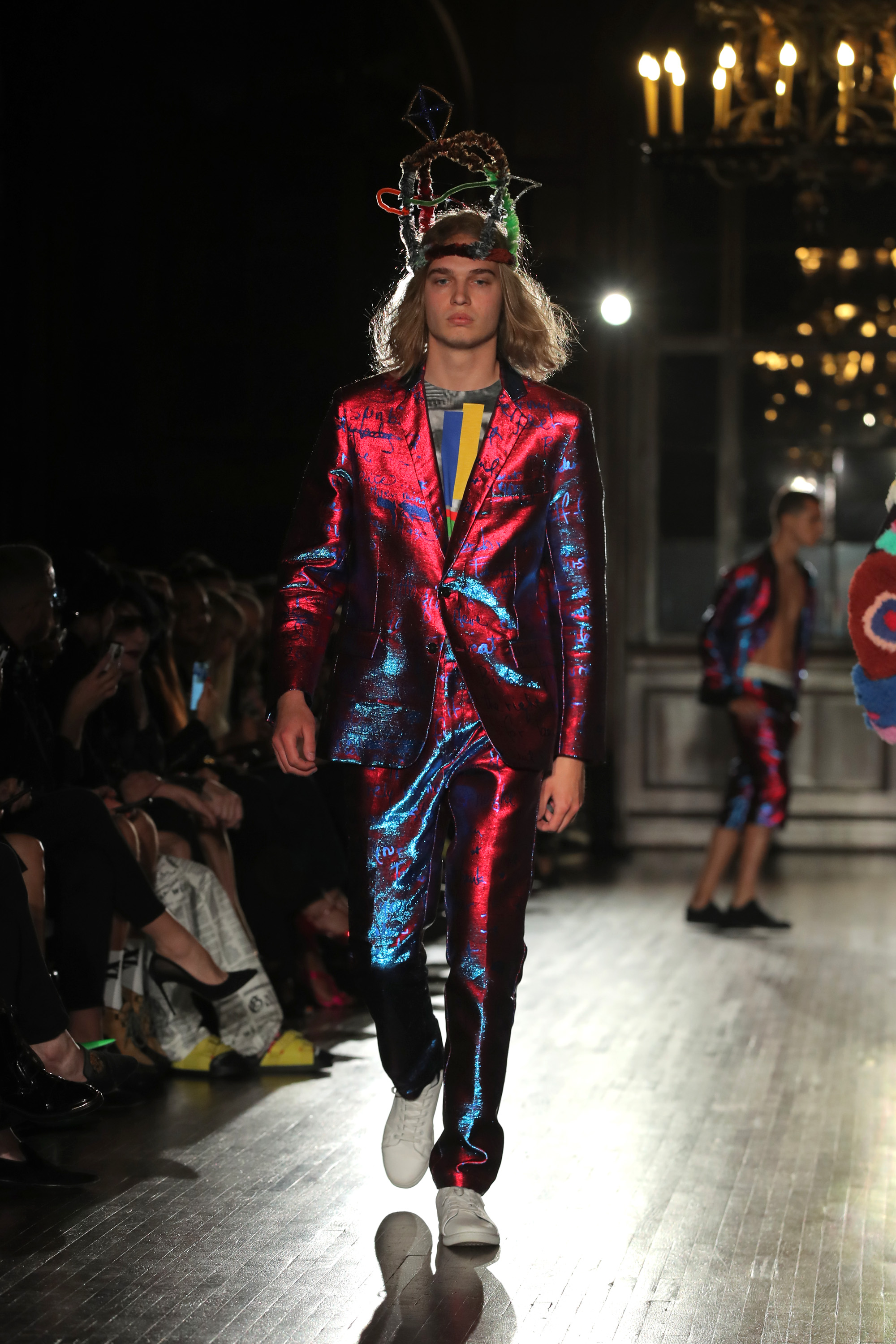 There were also red-carpet-worthy gowns, one in moss agate print silk bringing to mind L.A. interiors superstar of yore Tony Duquette, another in fuchsia organza bejeweled with a tonal web of sequins ready for today’s pop diva. 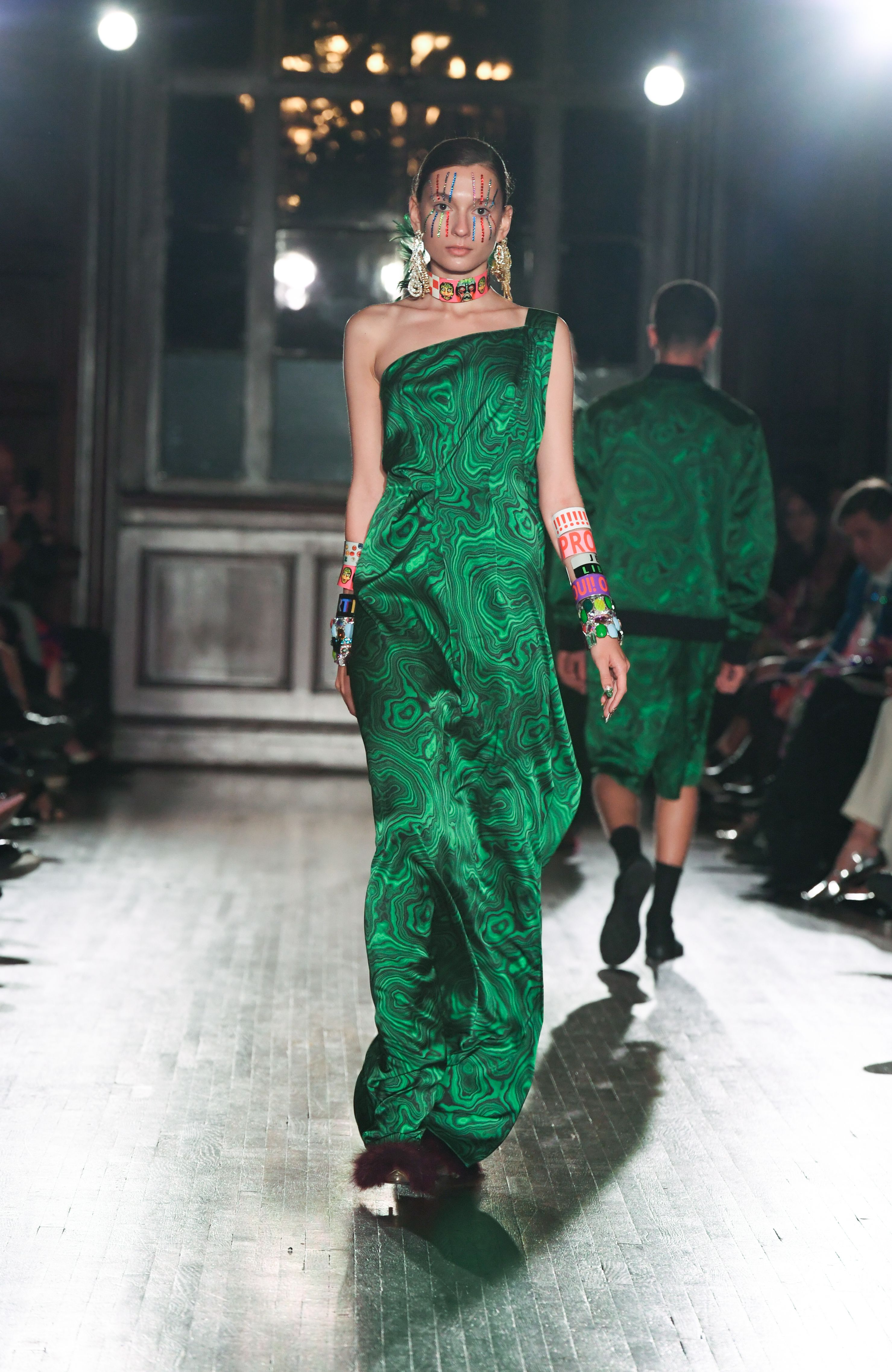 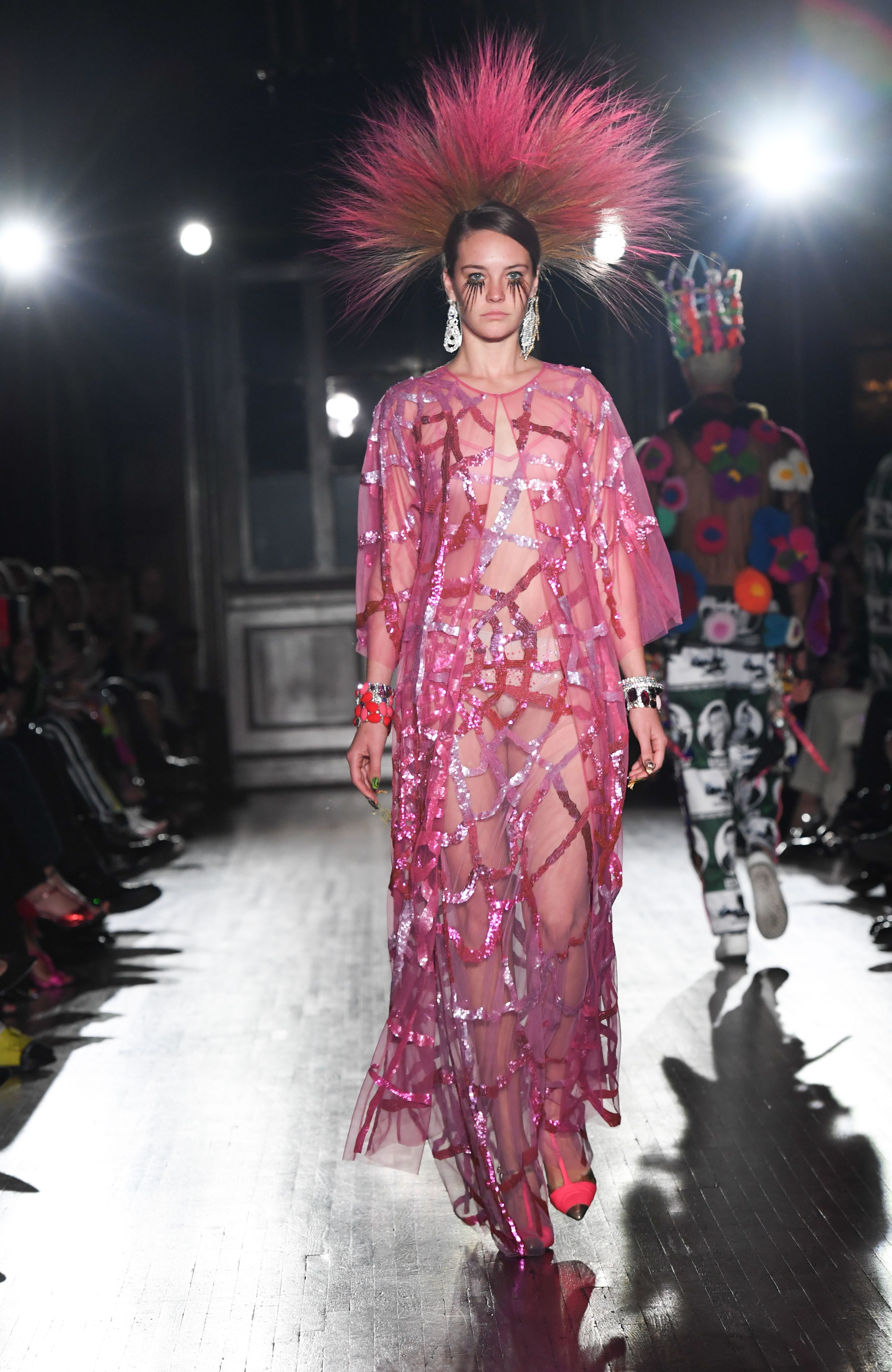 Adding a punk edge were pipe-cleaner crowns, faux-mohawk hair and craftsy touches from the brilliantly beastly shaman coat that was shaggy with ribbons, chains, bottle caps and measuring tape, to the tips of CND-manicured fingers dripping with crystals and fringe. 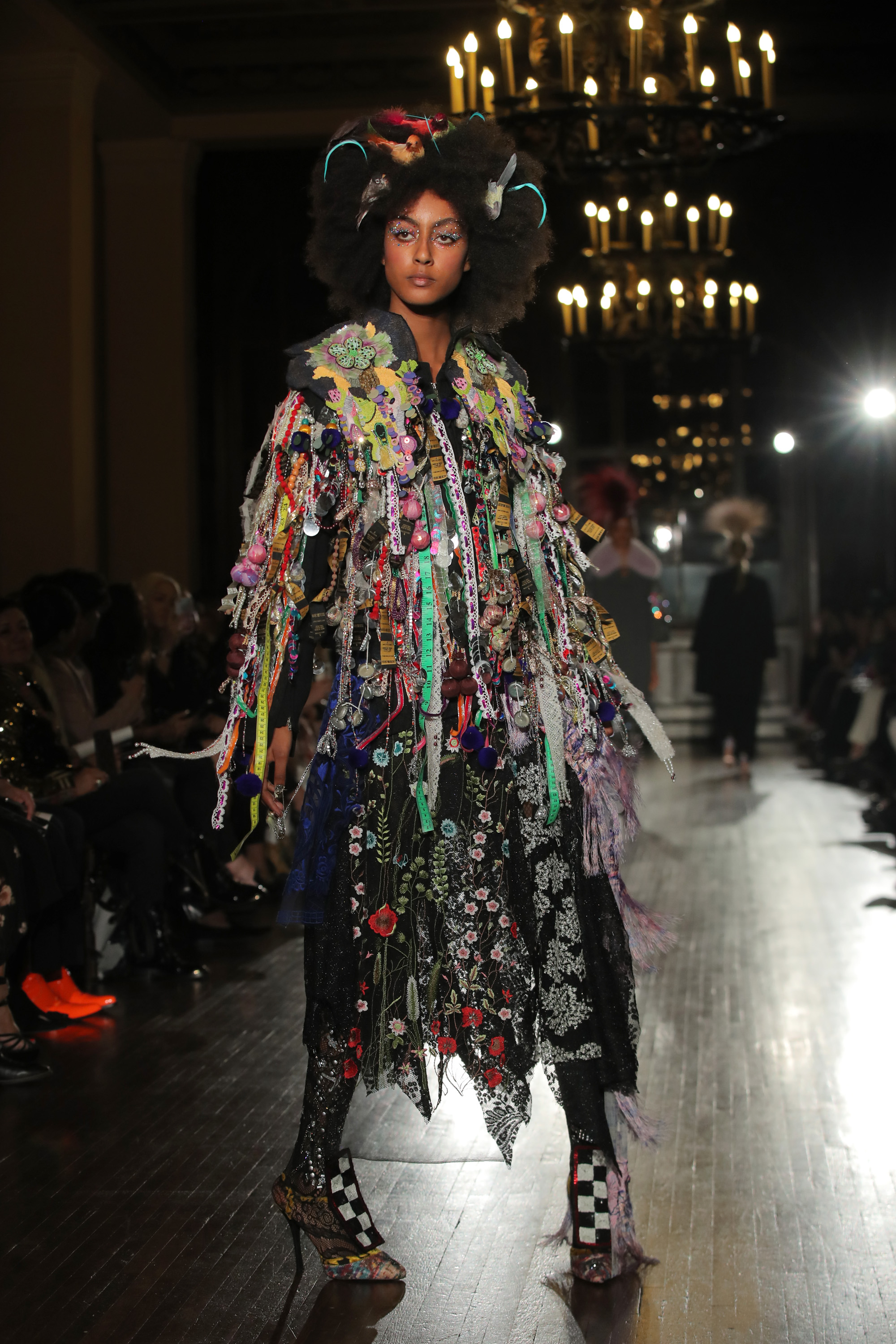 Hartig has a knack for clever prints, and this season’s crop included a memento mori of burning candles, Flemish still-lifes and Ottoman textiles; a “Figgy pudding” botanical, and an allover portrait print of Sartre with the repeating word “Nothingness,” all of which were made into a streetwear lover’s tracksuits and low-slung shorts. 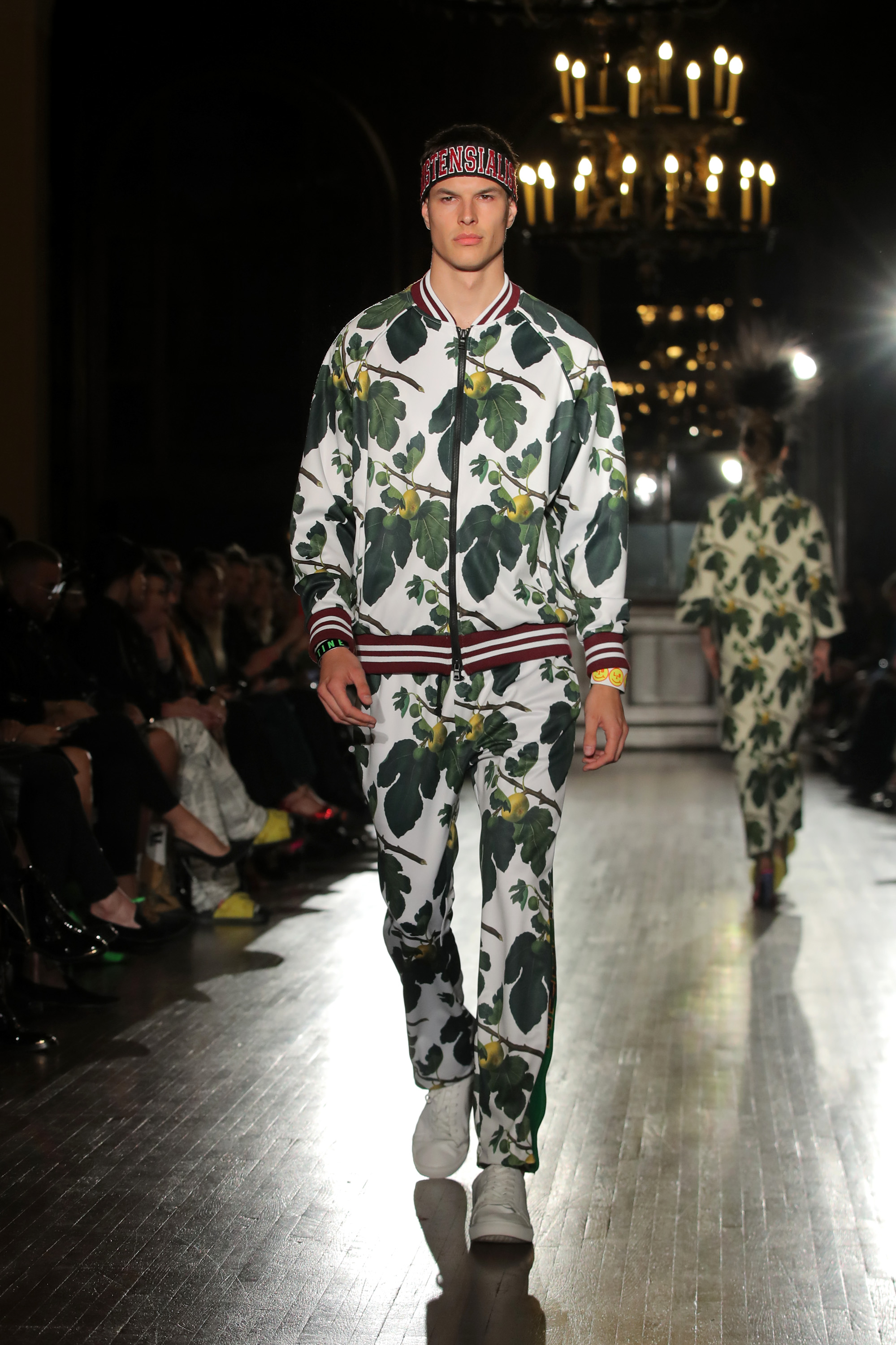 “I don’t mean to get political, but every day that goes by with this administration, I feel like we are getting further away from the truth and reality, and up is down and lies are facts and it’s a really weird time to be living in this country,” the designer said of his nod to Sartre. “Someone told me that every time they wear one of my garments, 10 people will approach them to ask about it. In this age when we live such separate lives with our devices, that my clothes are bringing people together…if they are doing nothing else, that’s a nice thing.” 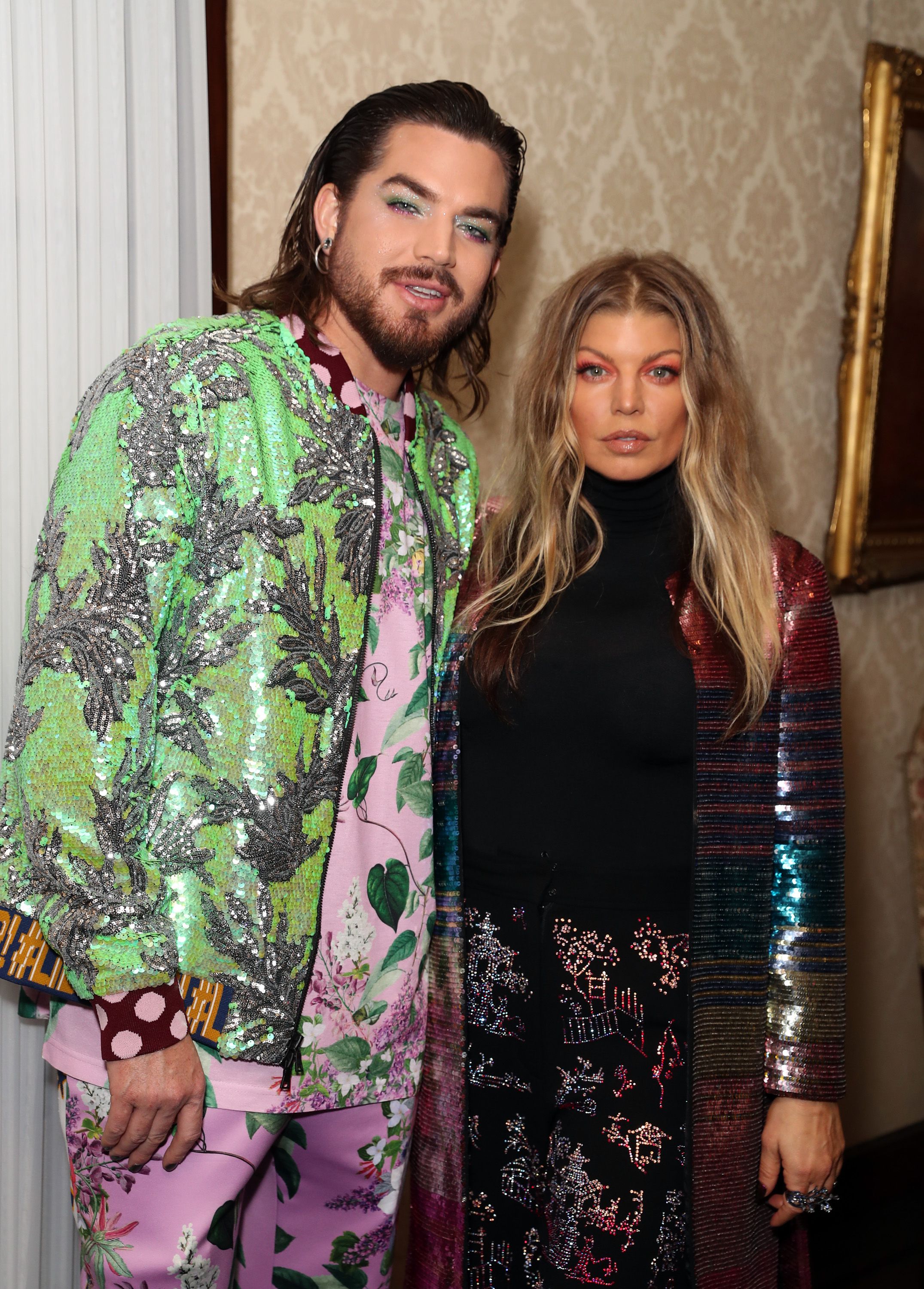 After the runway show, people didn’t rush out like they usually do, but moved to the courtyard for cocktails, avocado toast nibbles and a performance by Ariel Beesly.

“I enjoyed the use of silver sequins and the big hair and lashes,” said Manson, in fashion-critic mode. “It was strangely glam in a weird neon, futuristic, cyberpunk way.”

“There is less of a feeding frenzy at an L.A. fashion show,” offered Von Teese, who has been a front-row regular in New York and Paris. “But that’s not a knock. From what I saw, there was some world-class hair and makeup and clothes.” 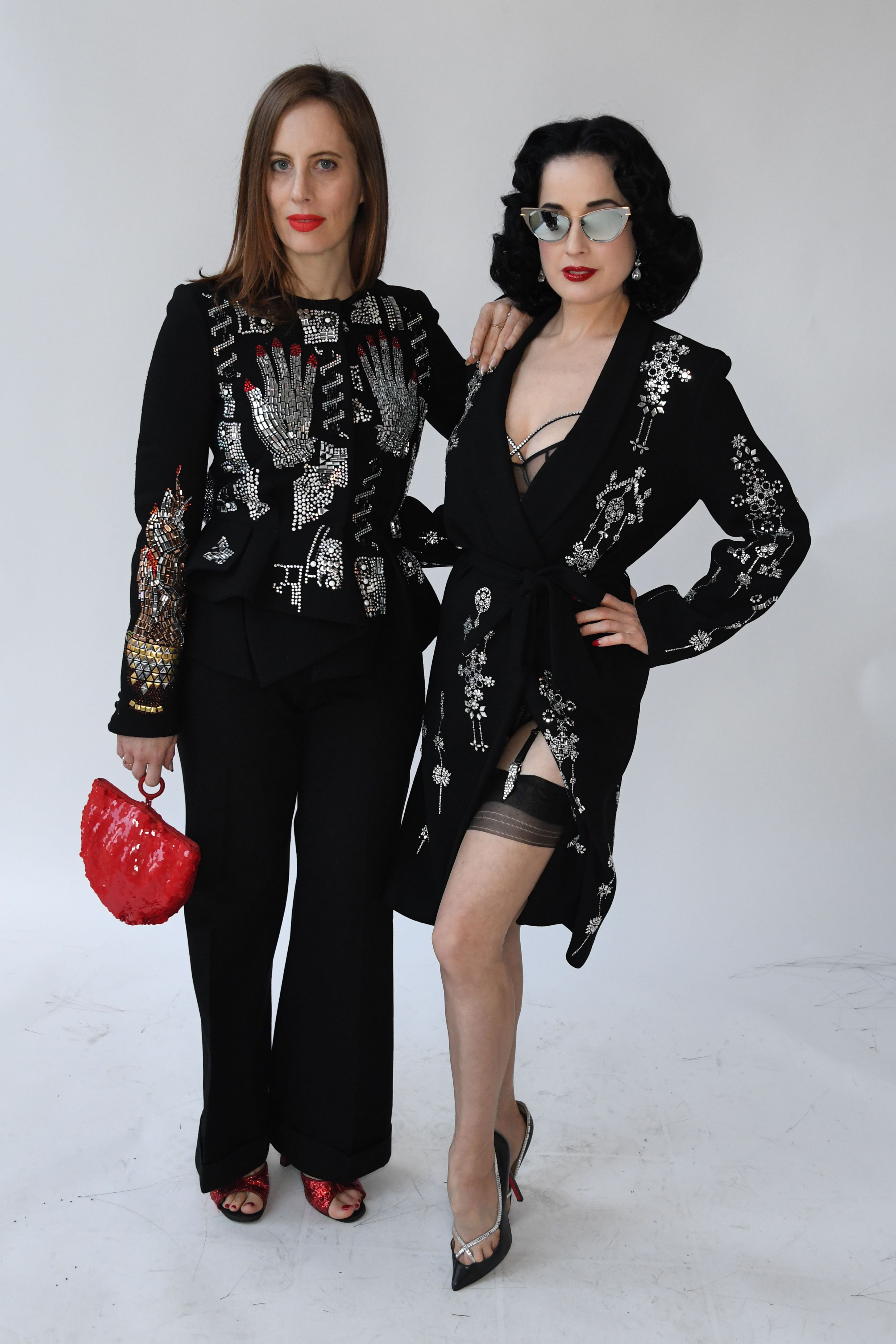 The show was styled by B. Åkerlund, who has created looks for Beyoncé and collaborated with Ikea, and apparently met her match in Hartig: “I have known Johnson for 20 years, but we just discovered we have the same DNA — we’re both crazy. We out-more each other!” 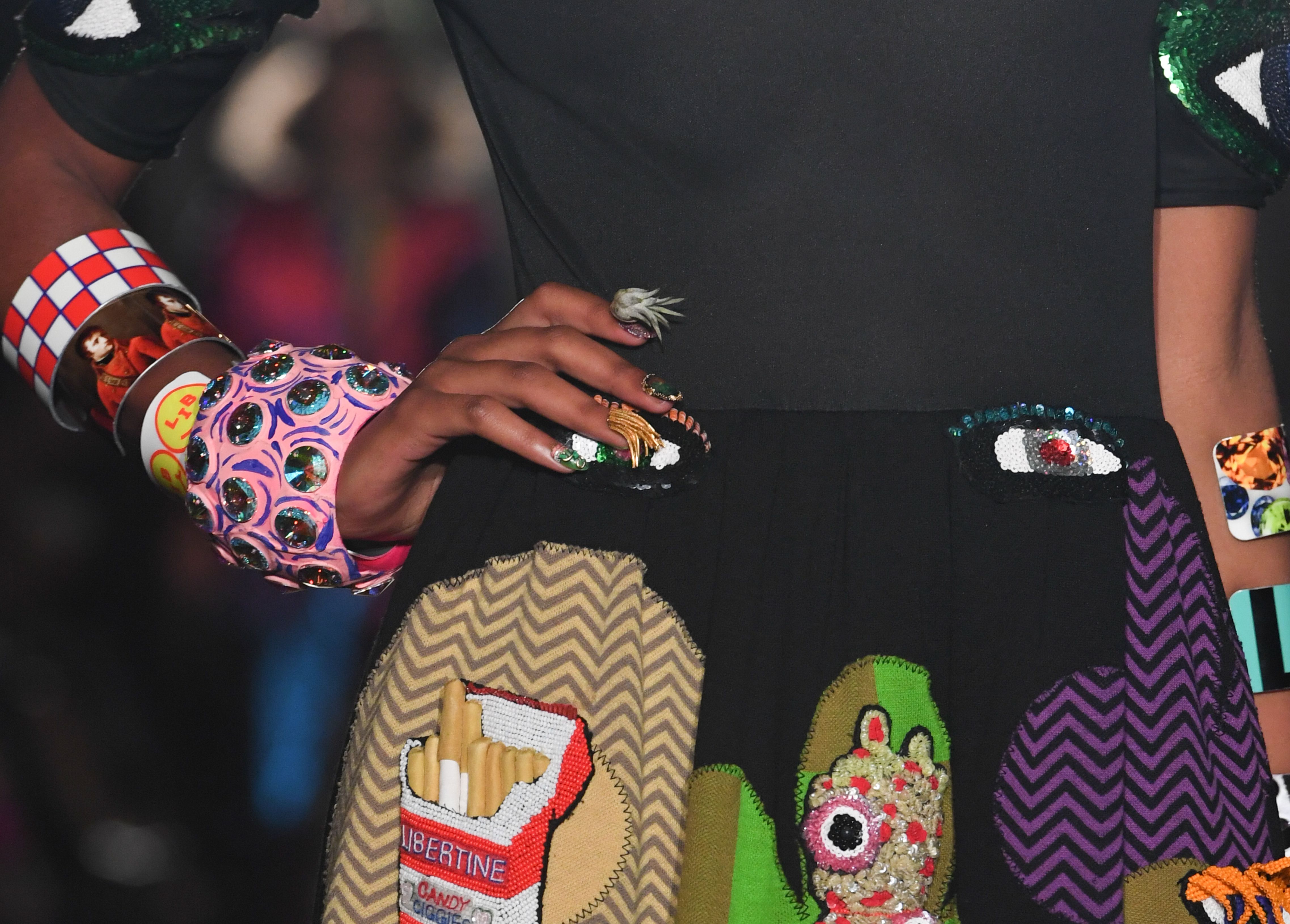 She brought her own Swedish fans, including the actress Malin Åkerman. “I have known B for almost two decades and wanted to come and support her.”

“I’m happy to be at Johnson’s fashion show in L.A. because he’s so talented and generous,” said author-filmmaker and fashion collector Liz Goldwyn. “When Karen Elson and I did our Vintage Vanguard project, we had 21 American designers rework our personal vintage and sell it on Moda Operandi for Dress for Success; he very generously reworked this 1950s red cocktail dress and embroidered it so sexy. I wore it once before it sold,” said Goldwyn, who is about to launch season two of her podcast “Sex Ed” on May 8. “It’s great to see him do a show in a historic theater like this. He’s a hometown hero.” 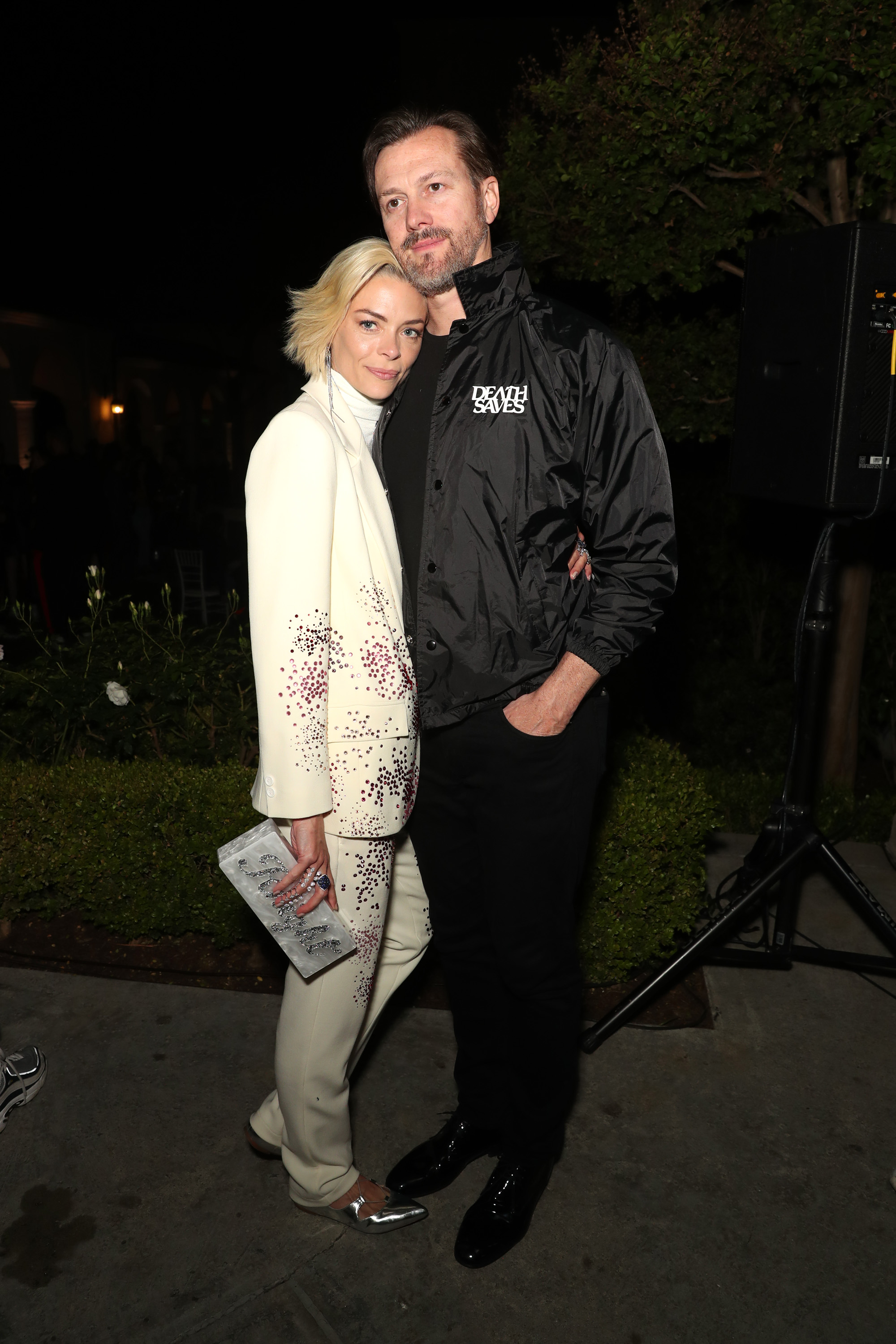 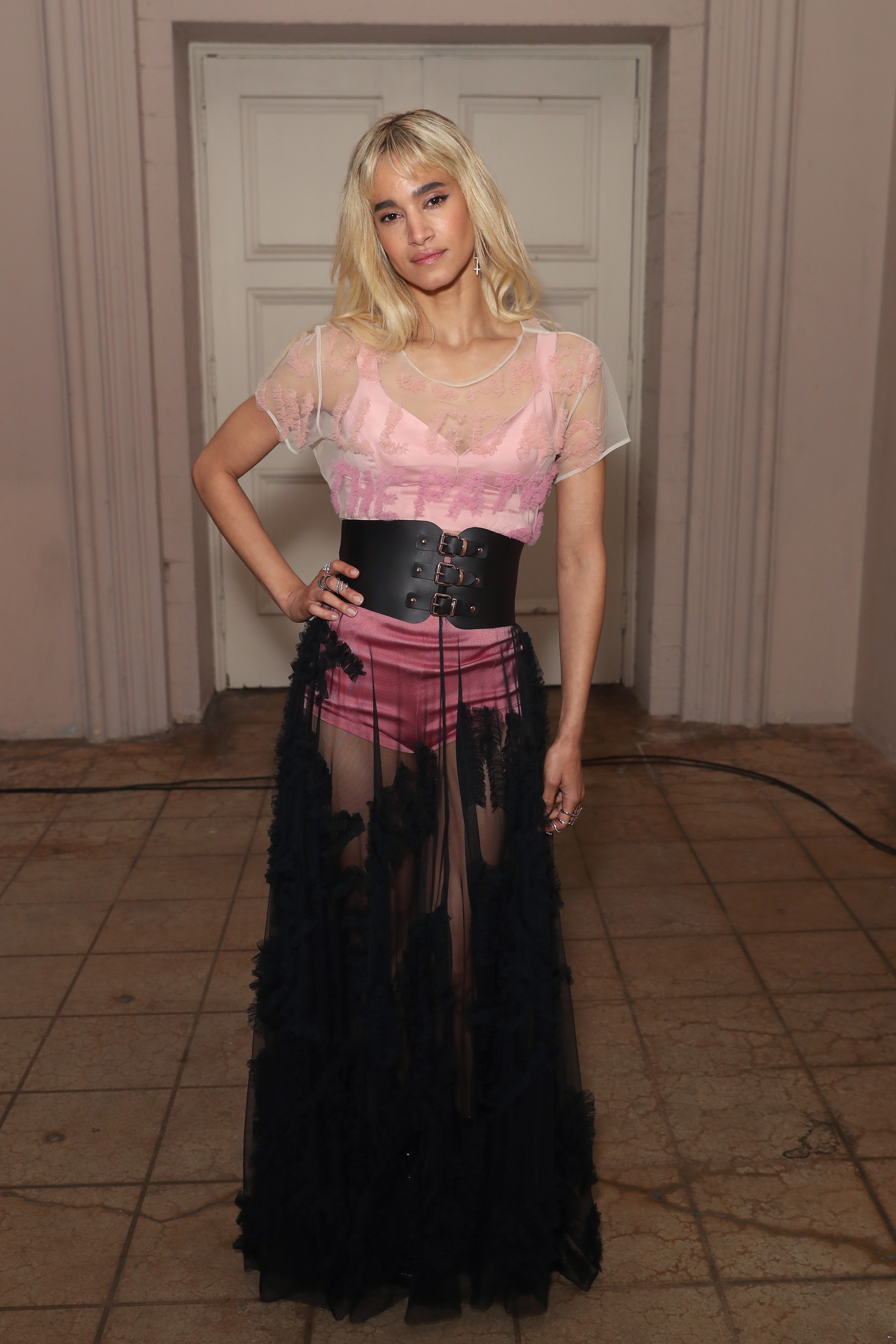