The tome is a compendium of 19 of her “Fashion Icons” interviews at the 92nd Street Y. 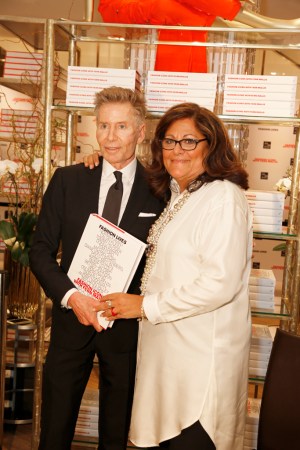 NEW YORK — “It was scary,” Michael Kors recalled when the ceiling collapsed at his 1990 fashion show in a loft. “Thank God no one was hurt. Fern was there. She rolls up her sleeves, looks at me and says, ‘We’ve got to do something.’”

Kors and others in the crowd of 450 strolled down memory lane with Mallis Monday night at Saks Fifth Avenue, which held a book signing for her new book “Fashion Icons.” Almost 200 copies of the Rizzoli-published tome, a compendium of 19 of her “Fashion Icons” interviews at the 92nd Street Y, were sold.

“I was her first interview at the 92nd Street Y. It’s really a special place,” said Calvin Klein, who rarely takes interviews these days. “With Fern, who has been a friend for a long, long time, well before the CFDA, it was an easy thing to do.”

“She’s a sweetheart with a lot of chutzpah,” said Tommy Hilfiger, who was also interviewed by Mallis at the Y. “She never takes no for an answer.”

Ralph Lauren did say no to Mallis’ Y invitation, but she got the designer to write the foreword to her book. “I wanted him in the book. Since he didn’t do the interview, I needed him to do the foreword,” Mallis told WWD. She’s eyeing some other hard-to-gets for the Y series. “I’m in touch with Karl Lagerfeld. Rosita Missoni said she would do it. Kanye West has an invitation.” A conversation with West could be the powwow the two need after some mutual public dissing recently.

As for her favorite Mallis moment, public relations executive Melanie Seymour Holland replied: “When she fired me in 1994. I was Fern’s secretary when she was the head of the CFDA. It was the nicest firing I ever had.”