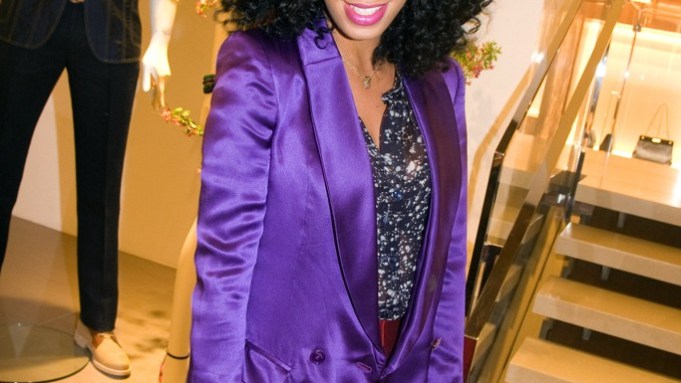 It is a rare and felicitous occasion when multiple parties (unaffiliated, but of similar appeal) are conveniently located to one another.

It’s similar to being struck by lightning to have them be literally across the street. Thursday night, that happened. Ferragamo was first, with a celebratory cocktail party to fete their reopened flagship at 655 Fifth Avenue and to benefit the Society of Memorial Sloan-Kettering Cancer Center’s Pediatric Family Housing Endowment. The spring collection was for sale throughout the space as well as on the backs of some partygoers: Fabiola Beracasa, Zani Gugelmann, Hannah Bronfman and Solange Knowles among them. A six-months pregnant Beracasa gamely navigated the crowds. “The only real difference is not being able to wear everything you want,” she said of her pregnancy. “And though my ninth month is July, I think I’ll probably deliver in August. Summer baby, I guess.” The label was also launching the luxury getaway guidebook “Mr & Mrs Smith Hotel Collection: Italy,” though Bronfman had a more of a domestic vacation in mind. “I’m going to Santa Fe this weekend,” Bronfman said. “And then Coachella and then L.A. Time for some sun.” Bronfman was headed to a fund-raiser downtown for Lift, a charity that works on building economies in low-income countries. “It’s all about the entrepreneurs,” she grinned.

A little later and a few steps away at the landmark Cartier mansion, the jeweler was feeling retrospective, holding an exhibition honoring Aldo Cipullo and New York City in the Seventies. “We’re known as being very French, very historical, we were founded in the 1840s,” explained Emmanuel Perrin, the company’s North American president and chief executive officer, “but tonight it’s about New York and about the 1970s, which was for us, an almost equally important time in our history.” Charlotte Casiraghi, Lily Collins, Arizona Muse and Jason Wu surveyed the advertisements from the disco era that lined the walls along with quotes from Cipullo.

A montage of black-and-white photographs from Studio 54 covered one wall labeled “The Scene.” Lou Reed surveyed it quizzically. Did he think it was an accurate portrayal of the era? “For some people, sure.” Reed shrugged beneath a photograph of Mick and Bianca Jagger. Pierre Rainero had been showing him images of Elizabeth Taylor, and her collection of Cartier baubles. “She looks Photoshopped,” Reed said of one photo, gesturing loosely at her chin. “She isn’t,” Rainero protested, “we even have some of her jewelry here.”

Guests were directed to 30 Renwick street in SoHo for the Cartier after party, where a makeshift nightclub had been created replete with tiers of booths and a DJ set by the Misshapes and James Murphy of LCD Soundsystem. Rita Ora, a recent addition to Jay-Z’s Roc Nation label, took to the stage around 11. Olivier Theyskens, Karlie Kloss and Chanel Iman all turned out to dance. “This is my first New York performance,” Ora squealed, launching into a cover of Destiny’s Child hit “Say my name.” Iman laughed, “Jay-Z and Beyoncé are here.” Sure enough, the uberfamous couple had just disappeared into the crowd. “She’s so beautiful, and they’re so sweet…and they love each other so much,” Kloss swooned. And what about Cartier? Kloss laughed, “I want a Love bracelet. I think they’re so romantic.”