By Lauren McCarthy on May 7, 2014
View Slideshow 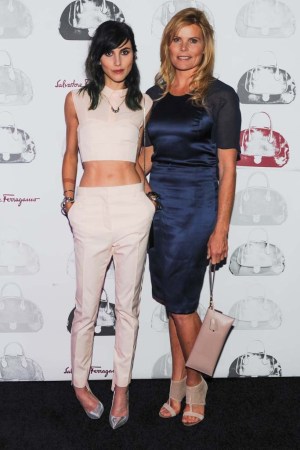 FETING FIAMMA: “I look like a giant.” Karolina Kurkova was peering over a photographer’s camera to closely examine the picture he had just taken of her. The model — all 5 feet 11 inches of her — had just entered New York’s Casa Lever for a dinner hosted by Massimo and Ferruccio Ferragamo in honor of their new Fiamma bag and ad campaign. Kurkova weaved through the crowd to meet up with the bevy of models posted near the bar. The rest of the crowd included Indre Rockefeller, Louisa Gummer, Sophie Auster, Lauren Remington Platt and Harry Brant.

The Hemingway mother-daughter duo stuck together throughout the evening. “This was actually our second or third time modeling together,” said mother Hemingway. “It was amazing,” said her daughter, sporting a navel-exposing Ferragamo crop top. “It’s not like I got on set and was like, ‘Who are you?’’’ The mother continued feigning fake disgust. The daughter took the bit a step further, taking on an exaggerated Brookyln-esque accent. “‘I don’t even know her!’” she laughed. “It would have been really funny if we were actually fighting on set.” But mom said they never really fight. “She wasn’t a rebellious kid,” she said. But what about her daughter’s ever-changing hair color, now a jet black with emerald green tips?

“Oh, I don’t think that her hair is rebellious,” she said, with a stamp of mom approval. “It’s just cool.”