Ferragamo commemorated the U.S. release of its Attimo perfume. 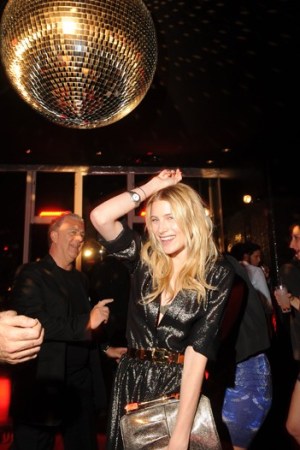 It seems that these days when it comes to celebrating the release of a perfume (or lipstick or mascara), cocktails just won’t cut it. When Yves Saint Laurent toasted the relaunch of its iconic Seventies fragrance Opium a few weeks ago, the brand pulled out all the stops, hiring fire-breathers, building an elaborate hologram display and inviting a splashy guest list that included Ashley Olsen, M.I.A. and Maggie Gyllenhaal.

This story first appeared in the July 2, 2010 issue of WWD. Subscribe Today.

Festivities were equally flashy on Wednesday night when Ferragamo commemorated the U.S. release of its Attimo fragrance. Attimo spokeswoman Dree Hemingway and co-hosts Chiara Clemente, Lady Alice St. Clair Erskine and Fabiola Beracasa joined a young, mostly Euro crowd that included Agyness Deyn, Irina Lazareanu, Stavros Niarchos and Vito Schnabel at the tightly packed affair held at Le Bain. To ensure the reason for the party was not lost on revelers, organizers covered the venue’s jacuzzi with a neon sign reading “Attimo” (topping it with Plexiglas to create a makeshift dance floor) and created a live reenactment of the brand’s racy ad campaign using underwear-clad models and a bed.

Hemingway helped matters along, working as the event’s unofficial promoter. “She was the one who called me and asked me to host,” explained jewelry designer Gaia Repossi. “I love Dree and I loved Ferragamo’s fall collection, so I said yes.”

Repossi’s affection was returned. “She’s a genius,” cooed Hemingway. “When we first met, she sent a ring to my hotel room and it was the best gift I’ve ever gotten.”