The event was also to celebrate the launch of the Italian house’s newest endeavor, a Web site entitled “The Girls About Town.” 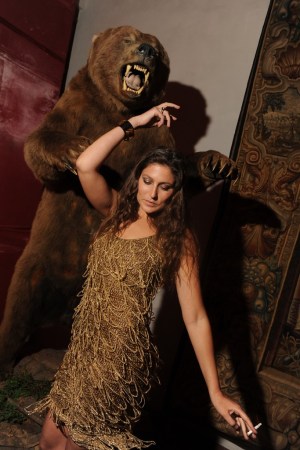 Julian Schnabel’s prized pink townhouse, Palazzo Chupi, was drawing more eyes than usual on Tuesday night as it played host to a spot-lit step-and-repeat setup on West 11th Street in Manhattan made entirely of peonies. The flowers matched the building. The occasion was the launch of Ferragamo’s latest perfume, Signorina. The fragrance’s face, Bianca Balti, was upstairs on the second floor at a private dinner for the launch and in her element. Rumor had it the building was a fragrance factory in its previous incarnation.

“It’s so beautiful,” Balti said of the flat’s towering ceilings and massive canvases, the tufted velvet banquettes and wall-sized tapestry hiding the service entrance. The bedroom was lined with a wall of art books and the bed tucked into the corner had a carved headboard painted in pale turquoise and gold leaf. Balti perched on the end of it.

“What can I say that hasn’t been said? I love Ferragamo,” the model trilled.

The fete was also to celebrate the launch of the Italian house’s newest endeavor, a Web site entitled “The Girls About Town,” which promised to follow several of the dinner’s guests going about their lives (via uploaded video and text content) as “the quintessential signorinas.” Lauren Remington-Platt was a little unprepared.

“I don’t really know what I’m supposed to do for that, yet,” the socialite and budding beauty mogul said. “Vênsette did all the makeup for all the girls tonight, and that’s really what I’ve been focused on. I figured I’d read that e-mail tomorrow.”

Kate Mara was in attendance, along with AnnaSophia Robb, Emma Roberts and Alice St. Clair. Piper Perabo preened on a banquette. “It is certainly very female-heavy, this party,” Remington-Platt added, surveying the guests angling towards the buffet. Stella Schnabel was nearby, shimmying for the cameras in front of a large stuffed bear in the dining room. “Go, go, go!” Carlos Mota clapped. Jessica Hart and Stavros Niarchos arrived, slipping past Michelle Harper, who was circulating the room with Harry and Peter Brant Jr. on her sides. The trio posed for photographers and their pouts were identical and nearly professional. Hannah Bronfman, who’d been detailing Dustin Yellin’s new space in Red Hook, interrupted herself to greet Harper. “I knew you’d meet these boys and love them.” Harper pulled them closer, crooning “young, fun and gorgeous: yes please! Versus old, cranky and boring.” Courtney Love slipped into the dinner behind Alexandra and Theodora Richards and made a beeline for Stella Schnabel. “This is wild,” Love said of the scene, though it seemed rather civilized.

After dinner, a steady parade of party guests began to fill the cavernous first floor-turned-nightclub for a performance by Coco Sumner’s band, I Blame Coco. The space was filled with pink and gold balloons, cotton candy dispensing caterers and fragrance spritzer girls in floaty pink dresses to match the one worn by Balti in the scent’s advertisement, which played over their heads. They passed out pink ribbons doused in the scent. Balti laughed when one was offered her way. “Believe me, I’ve got it,” she said.