The performing arts center will open in October. 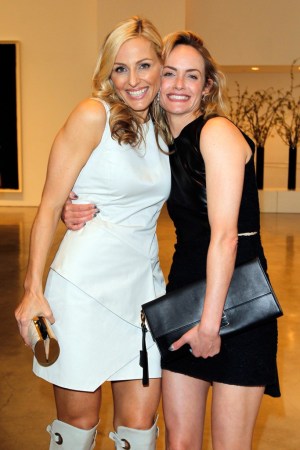 It’s never too early for a pre-party, especially when the event in question has been years in the making. On Friday, Ferragamo hosted a cocktail kickoff at the Gagosian Gallery in Beverly Hills in celebration of the Oct. 17 opening of the Wallis Annenberg Center for the Performing Arts. Wallis Annenberg, Jamie Tisch and James Ferragamo corralled fashion and art players in the cavernous white space for a presentation of the fall collection, its first Stateside. Also decked out in Ferragamo were Tisch’s pals Angie Harmon, Minnie Mortimer, Amber Valletta, Crystal Lourd and Kelly Lynch, along with Cameron Silver, George Kotsiopoulos, Jessica Joffe and Liz Goldwyn.

“We have such a long relationship with Hollywood and the arts, so it feels fitting to be partners,” said Ferragamo, noting that his grandfather first came to Hollywood 100 years ago, the same time the city of Beverly Hills was founded. Tisch, who will be cochairing the opening gala, said the celebrity cochairs of the evening would be Brad Pitt and Robert Redford. “Not too shabby,” commented Wendy Goldberg.

This story first appeared in the May 7, 2013 issue of WWD. Subscribe Today.

Ferragamo will also host a runway presentation of its spring 2014 collection in the historic Italianate-style Beverly Hills Post Office, the cornerstone of the new arts complex. “We’ll be designing a special shoe and bag, plus a few ready-to-wear looks, just for the occasion,” said Ferragamo. “You’ll only be able to buy them in Beverly Hills.”