Ferragamo’s Night at the Museum 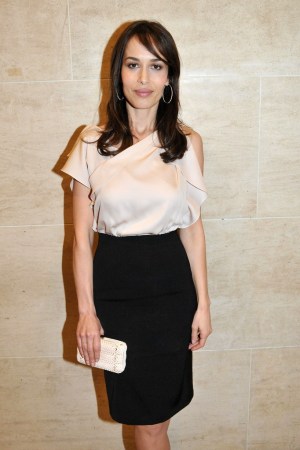 What made the Mona Lisa smile on Tuesday night? It could well have been Hilary Swank, among VIP guests as Salvatore Ferragamo hosted a gala evening at the Louvre.

The bubbly actress gamely posed for countless photos in front of the famous painting, displaying her own endearing, albeit more toothy, grin. She also snapped scores of photos of artworks on her iPhone, dazzled at the opportunity to roam the world’s largest museum with only about 60 other people.

Ferragamo chairman Ferruccio Ferragamo took Swank by the shoulder to show her the reverse side of “The Virgin and Child with Saint Anne,” painted with oils on wood between 1503 and 1519.

“It’s stunning. I’m speechless,” Swank said of the exhibition. She was without words too at the flurry of flashbulbs as she posed in front of the newly restored masterpiece, the focus of a Ferragamo-sponsored show on through June 25. “Are you sure they’re allowed to?” she asked.

Dolores Chaplin made a beeline for a pencil study of the composition, drawn to its “raw” quality and texture. The actress herself is featured at the museum: two floors up in three short films that are part of an exhibition spotlighting Belgian writer and filmmaker Jean-Philippe Toussaint. She let slip she would soon start filming a TV series about Marco Polo.

Carole Bouquet was on a high as the wine she produces in Pantelleria just received a score of 91 from influential publication Wine Spectator. The French actress just returned from a screening in New York of her latest film, “Unforgivable,” a family drama set in Venice. It’s slated to hit American screens in June.

Poured into a black dress by Hervé Leroux, she also wore shoulder-dusters and a pointy ring by a Geneva-based jeweler called Caspita. “That’s Italian for ‘Oh my gosh,’” she noted.

Touring the sprawling museum in high heels proved too much for some of the guests. A barefoot Bouquet winked at Virginie Ledoyen, who carried her peep-toe platforms in lieu of wearing them.

The tour ended with a dinner at Café Mollien, with Leonardo Ferragamo explaining that the Italian brand had imported its favorite Florence caterer to prepare the four-course meal.

The Ferragamo clan is slated to return to the Louvre on June 12, when creative director Massimiliano Giornetti is to parade the brand’s resort collection under the archways of the Denon wing.