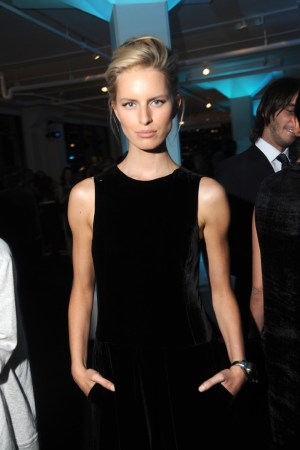 “We should get some of me walking,” Karolina Kurkova said Thursday evening, directing a photographer to follow her lead and capture the lines of her black velvet jumpsuit. The model was mugging for the cameras at the Armani-sponsored Dia Art Foundation’s Fall Gala as her husband, Archie Drury, looked on.

“We’re big supporters of Dia,” Kurkova said, “Have you been to Beacon? It’s beautiful.” The foundation runs Dia: Beacon, Riggio Galleries which houses a renowned collection of art in a former Nabisco factory. “And as for the Armani jumpsuit, I am very happy to be wearing it. It’s just the right temperature for it.”

“The dress code said festive, so I felt this was ‘festive.’ But who knows what ‘festive’ is anymore,” Rachel Hovnanian said of her cocktail dress, and judging by the crowd at the gala, nobody really knew what “festive” meant. Revelers’ ensembles ranged from floor-skimming evening dresses to parkas and caftans, tuxedos and suits to Julian Schnabel in his pajama bottoms and yellow-lensed glasses.

Lorraine Bracco and Bruce Weber were seated together at the dinner, which was interrupted by a live performance from Girl Walk // All Day, a sort of mime-dance combination consisting of three players who rolled and rioted, ripped their clothes and gyrated on small platforms scattered throughout the space, at one point pretending to sign the words of the Dia Foundation director, Philippe Vergne, as if assisting the deaf. China Chow was curious about the hubbub, asking: “What’s happening? From our seats we can’t see anything.”

“Please be quiet,” Vergne groaned into the microphone, fed up with gala goers who spoke during his first-course address. “Shh! Fine, I won’t repeat it and you’ll never know what I said.” Vergne continued as one of the members of Girl Walk // All Day leapt onto a nearby windowsill to grimly flail her limbs.

Kate Spade was on hand as were Parker Posey, Giovanna Battaglia and Vladimir Restoin-Roitfeld, though the fashion component was outnumbered by the artists present, which included Olympia Scarry, Hope Atherton, Dustin Yellin and Richard Aldrich.

“There’s over a hundred artists here tonight,” Nathalie de Gunzburg said, “people ask why art matters, the answer is in this room. Everyone here. What you’re doing. Who you are. What you can do.”