Known as a who’s who of literati, this year’s annual gala was no exception with The Old Guard wining and dining with noticeably younger scribes. 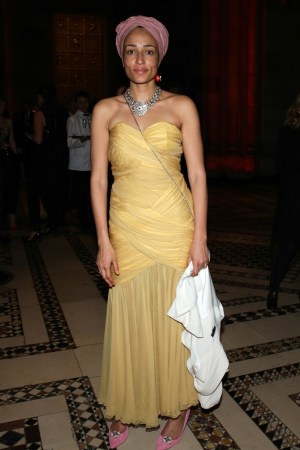 On her second martini and having just hauled on an electronic cigarette, that’s how cohost Zadie Smith sized up The Paris Review’s Spring Revel Tuesday night.

To appeal to the book-smart crowd of 525 at Cipriani 42nd Street in New York, the table displays were made of Underwood typewriters surrounded by books and copies of The Paris Review. Known as a who’s who of literati, this year’s annual gala was no exception with The Old Guard wining and dining with noticeably younger scribes. Perhaps “American Pie” and “About a Boy” producer Chris Weitz best captured how those worlds collide and not because he will publish his first novel, “Young World,” in July. Honoring poet Frederick Seidel, Weitz recalled how he first got to know Seidel as “just a guy with a really nice red blazer who lived next door to my folks in Sag Harbor. I discovered that he was a famous poet and of course I loved that, because famous poet is an oxymoron,” Weitz said. “Then I read his poetry and it was like the first hit of a new drug. You wonder, ‘Is this possible?’ And indeed it is but it’s very rare.”

John Jeremiah Sullivan also had nothing but praise for Seidel. Recalling discovering his poems, Sullivan said, “They weren’t worried about having something to say. They knew they had plenty to say — that there was always plenty to say about love, sex, politics, murder, beauty, money, death and motorcycles. It was whether a person could say it. To do that took work, the work of perfecting a style and courage, the courage of writing what seemed most true, not what is true, mind you. We don’t get to know what is true but what seems most true, which is a harder task because it can be done and therefore, fail at, and because it hurts.  This poet was asserting what felt like an ancient rite, the right to sing out of the deepest self to write painfully ugly things and to write painfully beautiful things. But not to write a single thing that he didn’t mean, that didn’t scare him.”

Preferring to remain seated, the famously shy Seidel sent his longtime publisher Jonathan Galassi to accept the Hadada Award on his behalf, explaining, “I think this is the closest he’s ever gotten to a podium.”

Smith, Uma Thurman and Martin Amis each paid tribute to Seidel by reading one of his poems, which were also tucked into the evening’s program. Before the awards got under way, Smith, who turned up in a mauve turban and sunflower-colored tulle strapless frock, said, “This is my prom dress. I bought it for 50 bucks off the Internet like 10 years ago. It’s some thing from London from the Seventies. I had the zip redone. It’s actually falling apart. This is its last outing.”

While most of the men went with pinstripe suits or shirts and ties, a few like Richard Ford skipped the tie and went with a gingham button-down shirt. The women, many of whom wore bold-colored dresses, were more imaginative, with several banking on what looked like irreverent chic — resalvaged sequin cocktail dresses, printed frocks and even a one-shoulder jumpsuit.

Guests included Gary Shteyngart, Emma Cline, Lydia Davis, Ben Lerner, Roz Chast, Gay Talese, Katie Roiphe, Lewis Lapham, Carol Muske-Dukes and James Lipton. A moment of silence was held for The Paris Review cofounder Peter Matthiessen, who died Saturday. Terry McDonell said Matthiessen stayed involved with the publication all his life, most recently judging the two writers who were honored Tuesday night — Lerner and Cline (the latter went home with the Plimpton Prize for Fiction, a $10,000 grant and an oversize ostrich egg.) Former New York City Mayor Michael Bloomberg also got a shout out from The Paris Review’s editor Lorin Stein for being the journal’s most generous supporter five years running. Later in the program Weitz likened the gift of The Paris Review as “perhaps the best thing the CIA ever did,” referring to the fact that Matthiessen’s involvement with its creation was in part a cover for his CIA dealings.

Amis didn’t appear to be hiding anything when he told attendees, “To accuse writers of being egotistical is like accusing professional boxers of being confrontational — it comes with the job.” (The novelist later said he is at work on the greatest self indulgence — an autobiography.)

During cocktails, Ford joked about other appearances, namely his own: “Earlier this year, Vanity Fair put me on a list of the best-dressed writers in the world. Then I saw the picture of me and I thought I looked like I walked out of a fraternity house. I even wrote a piece about it saying, ‘What were they thinking about? There are a lot of people in the world, but me?’”

“Let Me Be Frank With You,” his next book, is due out this fall. As to whether it gets any easier, Ford said, “Writing is neither easy nor hard. It’s something you choose to do, so if you choose to do it, that means you want to do it. It doesn’t really matter.

“You have to do something with your life and this is what I chose so I’m not going to bitch about it.”