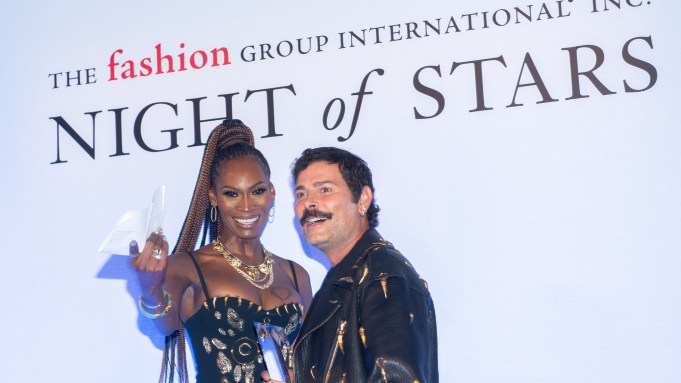 Honoring this year’s Superstar and Lifetime Achievement award winner Tommy Hilfiger, model Jasmine Sanders saluted him for being a forerunner about diversity. “Everybody thinks it’s a big fun thing to be inclusive now. But this is a man who really started it and opened doors for people, and really gave us a stage to walk on and to be us,” she said.

Hilfiger hinted at what’s ahead — the model will soon appear as an avatar in video games and on runways, noting that avatars and celebrities blended into one is what the future holds. “It’s an exciting journey and an exciting future for the metaverse,” the designer said.

After thanking his team, Hilfiger congratulated FGI Founders award winner Norma Kamali. Starting out, he was inspired by her fleece, sweats and sleeping bag coats. “While I was standing out in front of Studio 54 waiting for my entry, I was thinking about how talented she was and is,” the designer said, before addressing the other honorees individually.

Hilfiger started his brand in 1985, but he started his business in 1969 at the age of 18 with People’s Place jeans shop. Digital-focused as he is about the future, Hilfiger said his goal is to continue to use his brand as a platform and the power of fashion to bring people together and “do good stuff,” he said. “It’s been an adventure of a lifetime. I can’t quit. I can’t retire. I love every moment.”

Kamali shared a few of the early struggles that she faced after starting her business in 1967. Ten years later, she was in “a very difficult situation and was very unhappy. I was very shy. I couldn’t talk to anybody. I had $98. I knew if I stayed, I would lose my soul. I left. I never knew anybody in the press. I was sort of this invisible person,” Kamali said.

Fashion writer Marylou Luther helped to turn that all around and gave Kamali hope, she said. The designer delivered encouragement to others at the gala, having invited six Fashion Institute of Technology students to join her table “so that they could get the spirit of generosity that is the Fashion Group International.”

Accepting the Fashion Provocateur award, stylist Law Roach said, “I am a boy from Chicago, who was allowed to play with Barbie dolls when I was younger. That helped me to grow into what I am today. I am also here because of two things: someone told me I was special and someone gave me an opportunity.”

Now in a position to do that for others, Roach said that is all he thinks about every single day. “I came from nothing. I came into this industry not knowing anyone, [having] never been anyone’s assistant or intern. There was no nepotism. I built everything [by] trial and error, and just [by] making mistakes. Now I can say I’m friends with Tommy Hilfiger and Fausto [Puglisi] and Fernando [Kim.]”

Encouraging guests to address the “neighbor” beside them in a series of affirmations, Roach said, “Neighbor, as we learn, we teach. As we climb, we reach. As long as we keep those things in our hands and our hearts, and we give opportunities to other people, we will create a better world.”

Kathy Hilton and her daughter Nicky Hilton-Rothschild perked up the crowd in presenting the award to Oscar de la Renta’s co-creative directors and Monse cofounders Laura Kim and Fernando Garcia. Kim clued in guests to how she won a college scholarship through FGI. “It was the first check I got in the States. It really helped me to believe in myself to work in fashion and to get a job in New York City, which I never thought I could do. I hope that 17 years from today we get to win the Superstar award. I hope that we get to be as successful as Tommy Hilfiger.”

With Sustainability winner Gabriela Hearst traveling, presenter Dree Hemingway explained her absence. “Paris called and she was locked in a Chloé closet of fabric — upcycled.” Artist Dustin Yellin accepted the honor on Hearst’s behalf and randomly quizzed a few tables about the most pressing issue facing our species. Climate won out, but “more Champagne” got a few chuckles. But Yellin dove back into the heady. “Humanity is one I like to think about. What is the existential crisis of artificial intelligence or the nuclear problem, which still looms right behind us? Gabby makes me think of these things.”

Before handing over the retail award to Kith’s Ronnie Fieg, Victor Cruz said their chance meeting 10 years ago in a Kith concept shop in a SoHo store led to a five-hour conversation. Ten years later, Cruz was the best man at Fieg’s wedding. In turn, the retailer thanked Hilfiger for how he inspired him. “I actually lived in your world. You built a world for me. This is a combination of what Kith is. It’s everything that I loved in my life,” Fieg said. “My father has always seen all this product and collaborative projects that I work on. He understands that everything I do derives from what I loved between the ages of 13 and 19. What you loved between the ages of 13 and 19 is what you love for the rest of your life.”

An exuberant Fashion Provocateur winner, Fausto Puglisi was also up for celebrating his past. Although the Roberto Cavalli creative director now lives in Milan, the designer moved to New York from Sicily at the age of 17. “I consider New York my city. I don’t consider New York a city, but human. I love New York. I would kiss the floor in New York City,” he said. “Every time I design, I think about New York City and the beautiful dialogue of different cultures. This is the only place in the world. I mean you know. You’re New Yorkers.”

Beauty award co-winner Augustinus Bader, a renowned stem cell biologist and professor, spoke of how he first developed self-healing technologies to help severe burn victims or the gravely injured in 2003. Disbelief in stem cell research prompted his cofounder Charles Rosier to suggest, “‘If nobody wants to have this technology to help burned children heal with no scarring or needing skin transplants, why not at least try to develop a skin care cream that will take wrinkles away?’” he said. “I asked, ‘Why would you need this? Nobody needs this really.’ I was totally out of this area.”

Over time, people and patients started using the cream and became so happy, Bader said. “I realized that health and healthy skin is a part of beauty. Beauty means health and health means happiness.”

Other winners of the night included Mastercard’s Raja Rajamannar, who received the Tech and Brand Innovator award from Steve Sadove.