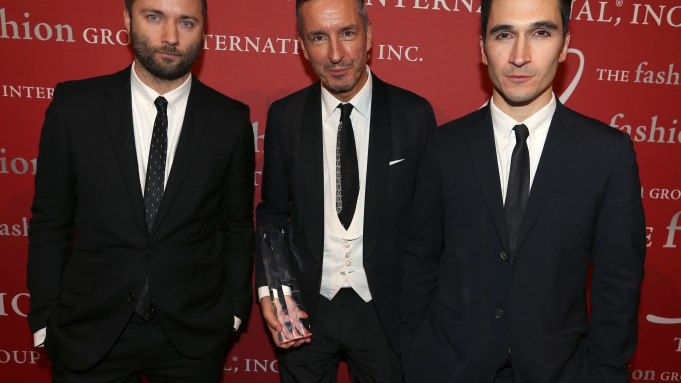 NEW YORK — Voicing opinions is pretty much a competitive sport in these cacophonic days and Thursday night’s Fashion Group International’s Night of Stars lived up to its billing as “Modern Voices.”

Emcee Simon Doonan said, “In all the years I’ve been hosting this event, I cannot remember such a star-studded, talent-encrusted international group of awardees. It’s like the Oscars, the United Nations and the Eurovision song contest all mixed up together.”

From the heartfelt and succinct to the enough-about-you-let’s-talk-about me moments, there was much said during the four-hour-plus affair — which, even by FGI’s well-known habit of being a long evening of speeches and awards, was one of the longest. Doonan tried — but sadly failed — to keep the wheels rolling, even taking a straw poll only minutes into the program: “Raise your hand if you’re praying that people make short speeches. Right, short speeches por favor — short, short, short like me and Stan Herman,” he said to much applause.

Having flown in with her mother, Odette, and her husband, Eoin McLoughlin, Simone Rocha listened up — gracious and brief in her remarks (thankfully, since her introducer, W editor in chief Stefano Tonchi, did more than enough talking for them both.) Her fellow Fashion Star award winners Isabel Marant and Thom Browne were also direct. Other straight-to-iters included Superstar award winner Dries Van Noten and Board of Directors’ Media award winner and WWD executive editor Bridget Foley.

In the dark about her Fashion Legend Award, Marylou Luther was truly too shocked to summarize her 60 years in fashion. Isabel Marant may have wished her presenter Inez van Lamsweerde had skipped the part about how she wears nothing but underwear in her studio, the easier to try on every item to ensure the fit is precise. “You told all of our secrets,” Marant said good-naturedly. “I wish that I could pretend that I don’t speak English but I do. It’s a real honor for me to be with you tonight. I don’t know what to say: I didn’t prepare anything. There was a very long speech. They told us we had two minutes but the one before took 10.”

Rocha also was mindful of the more loquacious, ribbing her tablemate Doonan that no one was heeding his advice and at one point jokingly tapping her watch.

The Cleveland Cavaliers’ Dwyane Wade served up another light moment saluting Browne. “The very essence of his message goes against the grain, against what we see on the streets around the world. In office settings, Casual Friday is now Casual Monday, Tuesday, Wednesday and Thursday. And your Sunday best just means wearing sweatpants without pizza stains for your weekend binge watch-athon of ‘Scandal,’” Wade said.

With what Doonan described as “The Price Is Right” worthy cheers, the QVC-ers were not to be overlooked or unheard. Accepting the Beauty prize, IT Cosmetics founder Jamie Kern Lima lengthily detailed her homegrown enterprise. But when you sell your start-up beauty brand to L’Oréal Paris for $1.2 billion and outrank Taylor Swift and Beyoncé on the 2017 Forbes America’s Self-Made Women’s List, why not? QVC president and chief executive officer Michael George, the Multi Media Retail Leadership award winner, also emphasized the customer connection. He said, “Our industry is changing at this extraordinary pace. Drones and other things are coming. But what has stayed absolutely constant is the power of extraordinary products, great design and great style to lift people up.”

Accepting the Humanitarian award, Macy’s Inc. chairman Terry J. Lundgren was also about the human connection, namely 2,000 women in Rwanda making burlap baskets for the retailer and a sustainable business for themselves. During cocktails, his presenter Tommy Hilfiger offered his take on modern voices — “social media — you either get with the program or you don’t.”

Sustainability award winner Marie-Claire Daveu of Kering reminded attendees, “In the luxury business we have a specific responsibility because we set the trends but we all have the creativity to set a new business model for the entire fashion industry merging, business, design and sustainability to become better than we are today for a better future together.”

Lord & Taylor Fashion Oracle award winner Kerry Washington said, “In this room, a modern voice is one that takes into account the important role that our industry plays in social culture. Fashion is not just about being pretty. The industry provides people with a language to express themselves at a time when many of us feel like our voices are being attacked. It’s a lot of fun and I think it’s important to not get too serious about ourselves and to allow ourselves to celebrate.”

In her final season of “Scandal,” the actress said her production company is developing “Five Points,” the first narrative project for Facebook as it moves into a new space of short-form storytelling. In a Thierry Mugler dress, the Bronx native later urged the crowd to bring more voices into “this business and the establishment…liberated voices, beautiful voices, strong and pretty, fabulous and free.”

Before taking to the podium to give the Technology award to Rebecca and Uri Minkoff, Olivia Palermo said she tries to give as much advice as she can to young girls starting out in fashion. “It’s important to try a few different parts of the field to see where your strong suits are, what you’re really passionate about and not to try to do it all in one year,” she said. “Try to do it in time, grow, evolve and try to understand the business. I’ve been in this business for nine and a half years.”

As waiters tried to herd guests downstairs for dinner, casting agent James Scully talked about the “thousands” of models he has heard from about mistreatment in the industry. “The thing that I’m happiest about just in the short-term is that people have a voice, people are really speaking out and it’s not going to stop. The whole Harvey Weinstein thing opened the door again. What Cameron Russell has done [posting models’ accounts of abuse on Instagram] is just the next step,” Scully said. “Obviously, what happened to Terry [Richardson who has been ditched by Condé Nast, Hearst and WSJ] is pretty serious, so I don’t think that’s the end of that, either. There may be people who are brought down before legal action ever gets to it.”

In the evening’s final round of awards, Marc Jacobs praised Foley’s “unadulterated love for fashion.” He said of her, “In an industry which emphasizes, anticipates and celebrates change, there is always one unwavering constant and that is Bridget’s honest, direct interpretation of what is what. I have always revered Bridget’s mastery of the written word, her strong moral compass and ability to so clearly articulate herself with such brilliant wit and total lack of pretension. Her inherent talent in weaving the romance of the fashion industry into the broader context of what’s happening in the world is a testament to her intelligent journalism.”

After a salute from Jack McCollough and Lazaro Hernandez of Proenza Schouler, Van Noten said, “As most people know, I love to make clothes, I love to garden, I love to make jam but I don’t love to give speeches.” After one final round of thanks, he closed the awards so that Paris Hilton could start deejaying at the after-party.