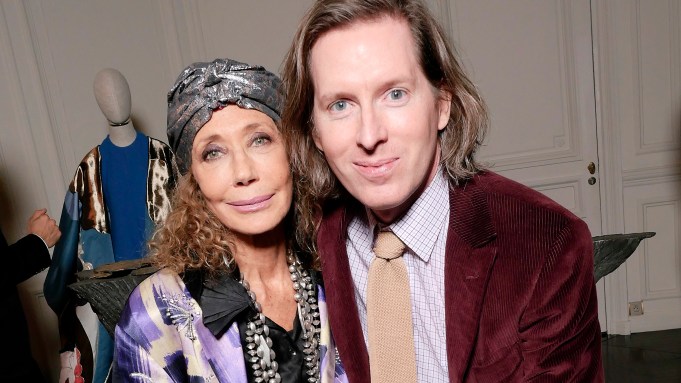 Wednesday evening in Paris turned into an art crawl, as the French capital buzzed with parties on the eve of the opening of the FIAC contemporary art fair.

The festivities kicked off at the Valentino salons on Place Vendôme, where guests including Marisa Berenson, Haider Ackermann and Christian Louboutin took in a display of Harumi Klossowska de Rola’s totemic animal sculptures, displayed alongside dresses from Pierpaolo Piccioli’s fall haute couture collection.

A puma mask made of 24-karat gold was propped next to a blood red dress, while a large-scale piece called “Pond I” sat near a blue-and-gold cape embroidered with images inspired by the Greek myth of Leda and the Swan.

“It’s wood that fell because of a storm and that remained in ferruginous water,” Klossowska de Rola said of the bog oak base topped with bronze water lilies. “It became extremely black over time — we’re talking 2,000 years B.C. It took me several years of research to find it.”

The jeweler, who is the daughter of the painter Balthus, turned her hand to sculpture three years ago, but said she has always been drawn to larger objects. “Since I was small, I was always fascinated by the work of Diego Giacometti because my father’s first wife, who was like a grandmother to me, had a collection of Diego’s objects, tables and lamps that I used to admire whenever I visited her,” she recalled.

Over at the party held for Alexandre de Betak by the Gmurzynska gallery, two huge red American fire trucks were positioned at the venue’s entrance on Quai de la Tournelle.

“I’ve posed with crazy things before, but I don’t think I’ve ever been this far,” said decorator Vincent Darré, who climbed on one of the trucks to take a picture with stylist Camille Bidault-Waddington.

The trucks were chosen by de Betak to illustrate the theme of his installation at the Gmurzynska booth at FIAC, the only red spot in the sea of white cubes at the fair.

“I’m tired of seeing artwork on white walls,” said de Betak, who was invited by the Zurich-based gallery to select pieces from its collection, a first for the fashion show producer. “I wanted to work with modern pieces that collectors think they’ve known for decades, but actually stop looking at. By putting it against a red backdrop, suddenly you have a different perception of that Klein or Miro painting.”

Guests tried out different poses on the monumental American Lafrance vehicles. Sound designer Michel Gaubert stood squarely on the steps, while photographer Ellen von Unwerth hung on one of the doors of the truck.

“I often use fire trucks in my pictures,” said the photographer, who previously portrayed actress Marion Cotillard in a flaming red dress in front of a Los Angeles Fire Department truck. “They work well because they are big, red, and often come with handsome firemen.”

The fire-themed event had particular resonance for actor Vincent Cassel, who is promoting his next film. In a scene in “L’Empereur de Paris” (“The Emperor of Paris”) — out Dec. 19 — his character, Vidocq, has to make his way out of a blazing building.

“Even if the pyrotechnics are often very controlled, there is always a small risk of things going wrong,” said Cassel, who was on his way to the burger bar. Does it add a bit of thrill? “I have children,” protested Cassel. “I’m not in this to hurt myself.”

A fire pit was lit as the sun set over the Seine, while barmen prepared cocktails laced with ginger and chili. “It’s like a bonfire,” said an elated Michèle Lamy.

The artist was about to stage an event at the Outsider Art Fair that will involve Dutch photographer Paul Kooiker photocopying parts of Lamy’s naked body, which will then be turned into a limited-edition ‘zine. “But I’ll still be going to the FIAC,” she added, saying she plans to attend the guided tour organized by artist David Hoyle.

“It took a lot of team effort,” Grosse said of the oversize construction of rainbow-painted tree trunks. The Berlin-based artist has become known for her explosive color palette. “Color adds an amazing energy and can appear anywhere: red on a traffic light, on a tomato, on a jumper….You never really expect it.”