A flood of West Coast socials turned out for the museum's eighth annual gala on Saturday. 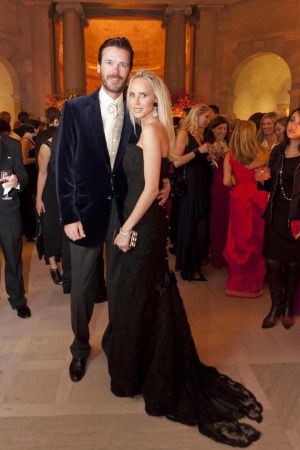 A sudden downpour notwithstanding, Vanessa Getty and Alexis Traina, both in long black lace Chanel gowns, swept into San Francisco’s Legion of Honor museum Saturday night for the eighth annual Mid-Winter Gala, which was sponsored by Chanel and which drew 400 of the city’s couples from the worlds of tech, arts, finance, fashion, design and philanthropy. A few new bright brains from Silicon Valley and San Francisco tech companies were present, including Google’s Marissa Mayer; Jeremy Stoppelman, co-founder of Yelp; Matt Cohler of Benchmark Capital, and Dick Costolo, chief executive officer of Twitter.

“Billy [her husband] and I spent the whole day ferrying our two sons to Little League games and basketball,” said Getty, who seemed somewhat surprised to find herself in a gown and jewels. She quickly glanced down to check her nails. They were perfect.

‘I would say black is back,” said Trevor Traina, as Angelique Griepp swept in wearing a dramatic black Chanel column gown. Guests warmed up in the dinner-and-dancing tent, which was lined in gold-edged black fabric with overscale chandeliers encircled in black mesh. The decor included purple cattleya orchids and peonies in white vases while the menu was classic French — tomato soup en croute with salade verte, steak frites with béarnaise sauce and tarte tatin.

Dancing continued late into the night — until guests realized that at midnight the clock clicked forward into daylight saving time.

The event saluted the museum’s new exhibit “The Cult of Beauty: The Victorian Avant-Garde 1860-1900.” The gala was expected to raise more than $400,000, which will benefit the Fine Arts Museums of San Francisco.