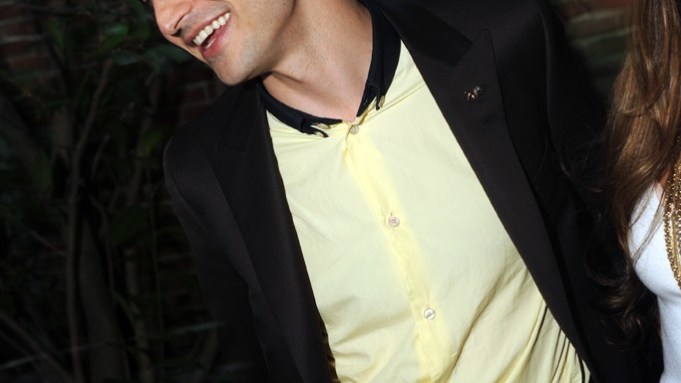 Guests at the FIT Couture Council’s summer dinner had an elevated barrier to entry at the Central Park Boathouse on Wednesday night. Outside the usually placid restaurant, several dozen union members of the Hotel Trades Council and their sympathizers were protesting against operator Dean Poll, whom they’ve accused of a litany of labor violations.

Union affiliates banged drums, blew whistles and appealed to the conscience of anyone heading toward the restaurant’s doors. In an appropriate nod to the environs, the protesters’ giant inflatable rat, a common site at such demonstrations, was wearing a pin-striped suit and pink tie.

Poll, it should be noted, has denied any wrongdoing.

Once inside, the usual dinner party atmosphere took hold as guests including Zac Posen, Sophie Theallet, Thakoon Panichgul, Jennifer Creel and Patricia Field mingled. The cocktail chatter drowned out most of the noise.

Midway through the party’s second hour, Steven Kolb was standing near the dining room’s door, just within earshot of the whistles and drumbeats.

“I don’t think I’ve ever had to cross a picket line to get to a party,” he said. “I was actually thinking about picket lines recently because Verizon’s on strike and they are the lamest picketers. At least the one’s I’ve seen. They don’t make any noise. They’ve got rotten signs. But these guys are good, right? They’ve got your notice.”

Maria Cornejo recalled a fur protest at the CFDA Awards one year.

“I feel bad, it sounds really pretty horrible, but in a way, the fact that we came, at least we’re aware of what’s going on,” she said.

“We shouldn’t get involved,” advised a p.r. executive.

Perhaps the clearest take on the situation came from, of all places, a cast member of “The Real Housewives of New York City.” Earlier this summer, Alex McCord and her husband, Simon van Kempen, traveled to Egypt to source cotton for a line of bed linens and towels.

“Noise level’s pretty similar actually,” van Kempen offered when asked to compare post-revolution Cairo to the scene in Central Park. “The fortunate thing is these people aren’t at risk of rubber bullets or riot shields or all that and they’re allowed to exercise their First Amendment rights as they should be.….But for the protests in Tahrir Square, Cairo was normal. Now, normal in Cairo is a bit like normal in New York City: What the hell is that?”