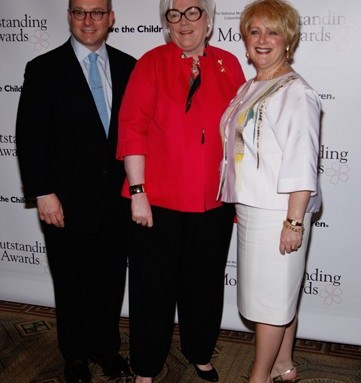 It was a lovefest for all things maternal at the 31st annual Outstanding Mother Awards luncheon last week.

The National Mother’s Day Committee singled out five women who have balanced raising children with building high-powered careers and helping to improve the lives of others: California’s first lady, Maria Shriver; Gert Boyle of Columbia Sportswear Co.; The Talbots Inc.’ Trudy Sullivan; Saks Fifth Avenue’s Deborah Walters, and broadcast journalist Mika Brzezinski. Proceeds from the event at The Pierre hotel in Manhattan went to Save the Children.

Boyle, 85, joked that her ads for Columbia have shown her driving a Zamboni over her son, Columbia chief executive officer Tim Boyle, and pushing him through a car wash to test the durability of the company’s products. “Is that a good Mother of the Year?” she said. Company chairwoman Boyle, who has written a book entitled “One Tough Mother,” recalled how she was a full-time mom until her husband died and she found herself at the helm of a struggling apparel business. But with the help of her three children, Columbia has grown into a $1 billion brand with her as the tough-as-nails spokeswoman.

Brzezinski, co-host of “Morning Joe” on MSNBC, said it was hard to consider herself worthy of the honor considering all “the balls we have in the air.” Sullivan, president and ceo of Talbots, said being a good mom is a team effort that requires learning the “fine art of balance.” Walters, senior vice president and general merchandise manager of cosmetics at Saks, said being there for your children is “the essence of great parenting” — a skill she learned from her mom.

The luncheon ended with emcee Mark Shriver, managing director of Save the Children, introducing his sister, Maria. She joked that her four kids were either not speaking, angry or upset with her, so she was “not feeling so great about my motherhood right now.” Being a mother was something Shriver said she was “terrified to do,” especially when she realized she would be judged against her own mother, Eunice Kennedy Shriver, “a force of human nature.” But it’s a job she’s glad to have taken on because “the gift of mothering just keeps giving,” she said.