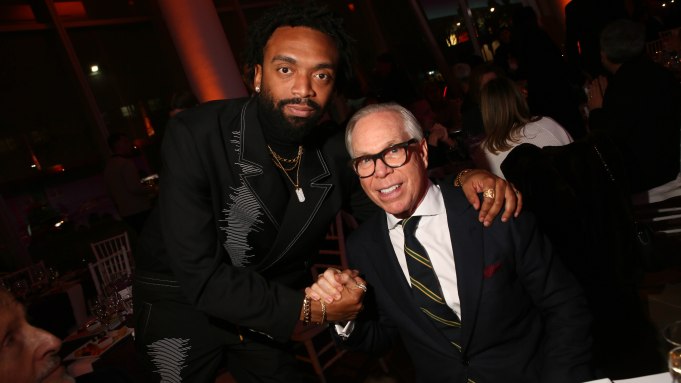 It was a meaningful sentiment that was carried throughout the night at Tuesday’s Footwear News Achievement Awards, which among other things saw Madden receive a Hall of Fame honor.

“There’s no shoes thrown anymore,” Madden said, joking about his well-known temperament. “I’m still the guy who wants to make every shoe for every girl. It’s about the shoes, it’s always about the shoes.”

The annual event, held at New York’s IAC Headquarters, was definitely about shoes, but the night also saw accolades given to people deemed “change agents” by FN’s Editorial Director Michael Atmore at the start of the evening.

“Part of my journey is like really sticking to my guns on things,” said Kerby Jean-Raymond, designer and founder of Pyer Moss and creative director of the newly formed Reebok Studies. The designer was on hand to receive the Person of the Year award. “The long way is indeed long,” he said.

Jean-Raymond told a heartfelt story of how he used to live in a car in the early days of his career, but it was his steadfast determination that got him through.

“This is the last person of year for the decade, right? So we’ll just call this the person of decade,” he said.

“Kerby is my brother, we are forever tethered. We live our lives victoriously. We refuse to bow. We refuse to take anything less than what we are worth,” said Lena Waithe, who attended this year’s Met Gala with Jean-Raymond and presented him with the night’s award.

Along with Madden, the Hall of Fame inductees included Jeffery Kalinsky, who thanked his multiple “families” from his eponymous store, Nordstrom, FN and his birth family; and Sandra Choi, who spoke about the history of her Jimmy Choo brand.

Emerging Talent awards were given to two buzzy brands, Midnight 00 and Paris Texas.

“I have to pinch myself to believe this is happening,” said Midnight 00 designer and founder Ada Kokosar, whose “Cinderella”-like shoes — the fairy tale was her original inspiration — have been seen in street-style images and gobbled up by retailers.

“I’ve created a shoe that is water proof, dirt proof and as I’ve seen — Champagne proof,” she said of her statement-making PVC-wrapped shoe styles.

“When I saw your shoes, I had that feeling that I was witnessing something amazing, something magical,” said Kat Graham, who presented the award to Kokosar.

Five years ago the FN team added a new category: Shoe of the Year. Previous winners have been the Adidas Stan Smith and Kanye’s Yeezy sneaker, but this year for the first time the award was bestowed not on a sneaker, but on Dr. Martens and its 1460 boot.

The brand’s ceo Kenny Wilson told the crowd that the shoe, almost six decades old, has been left unchanged since its inception, saying “It was created perfectly the first time around. How many consumer goods can say that.”

Several of New York’s fashion industry veterans were there to receive awards, including Tommy Hilfiger, who nabbed Collaborator of the Year for his collections with Zendaya, Gigi Hadid and countless hip-hop and rock groups over the years.

Kenneth Cole and Donna Karan each told the room stories about their work in Haiti, still ravaged from a hurricane in 2010. The two picked up the Icon Award for Social Impact.

The evening was rounded out with its final award, Style Influencer of the Year, given to J Balvin, the Latino reggaeton singer with 34.7 million followers on Instagram.

“I’m really nervous, it’s my first time being in a room with all these legends. I’m used to be being at music awards,” Balvin said.

Other awards of the night were Dicks Sporting Goods, Retailer of the Year; Puma and Rothy’s, each Brand of the Year; and Bob Campbell for Lifetime Achievement.

Amina Muaddi, last year’s Launch of the Year winner, this year nabbed Designer of the Year.

“There are so many people I admire here,” Muaddi said, giving a shout-out to Jeffrey Kalinsky, who bought her first collection, and her mother, who she says gave her the gift of freedom.

“It seems like a basic right, but it is not often given to women who come from my side of the world,” she said.

Kerby Jean-Raymond on Reinventing the System