Guests from both the art and fashion worlds flocked to Ca’ Corner della Regina, the brand's headquarters on the Venetian Canal Grande shore, for the preview.

By Alessandra Turra on May 31, 2013
View Slideshow 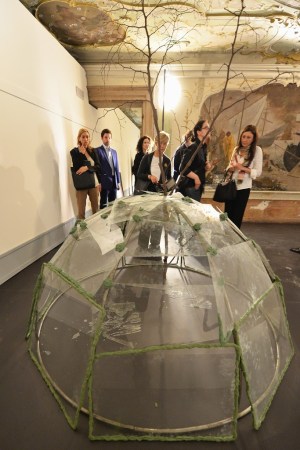 On Wednesday, Fondazione Prada opened the doors of Ca’ Corner della Regina, its headquarters on the Venetian Canal Grande shore, to celebrate “When Attitudes Become Form: Bern 1969/Venice 2013,” the exhibition curated by Germano Celant opening to the public on Saturday.

Arriving in water taxis, guests from both the art and fashion worlds flocked to preview the exhibition, which recreates Harald Szeemann’s exhibit “Live in Your Head: When Attitudes Become Form,” organized at the Kunsthalle Bern in 1969.

Renzo Rosso arrived with his girlfriend, Arianna Alessi, and sons Stefano and Andrea. “Today I went to Palazzo Grassi, the Dogana, which is more beautiful than usual, and the Crepaccio, an exhibition organized by Yoox,” he said. At the Crepaccio, which is curated by Rosso’s art teacher Caroline Corbetta, he bought a work by Caterina Rossato, an artist from Bassano del Grappa, the town in the Veneto region near the Diesel headquarters where Rosso lives. “You know, I’m always passionate about what is up-and-coming and supporting young talents.”

Venice has a special place in Rosso’s heart as he recently finalized an agreement with the city’s municipality to finance the restoration of the iconic Ponte di Rialto. “I’ve just been to visit the bridge with Stefano and Andrea and we are figuring out if there is a way to bring a creative idea onto it. Art is definitely taking a central role here and I hope Venice will soon become Italy’s most important creative and artistic spot.”

Jewelry designer Delfina Delettrez, who stood out with her Sixties-inspired vintage romper in a black-and-white harlequin pattern, expressed the same love for Venice. “It’s so inspiring here, not only the Biennale, but the city itself,” she said. “Venice is a surreal city and is very close to the dimension of dreams; in my dreams, I am often in a city where I can only move from one place to another by boat.”

A 20-minute boat ride from Ca’ Corner, on the island of San Giorgio, François-Henri Pinault hosted a private, French dinner — oysters and cheese were on the menu — in the cloisters of the Fondazione Cini.